China’s Satellite Launch Ends Up Risking the Lives of Citizens 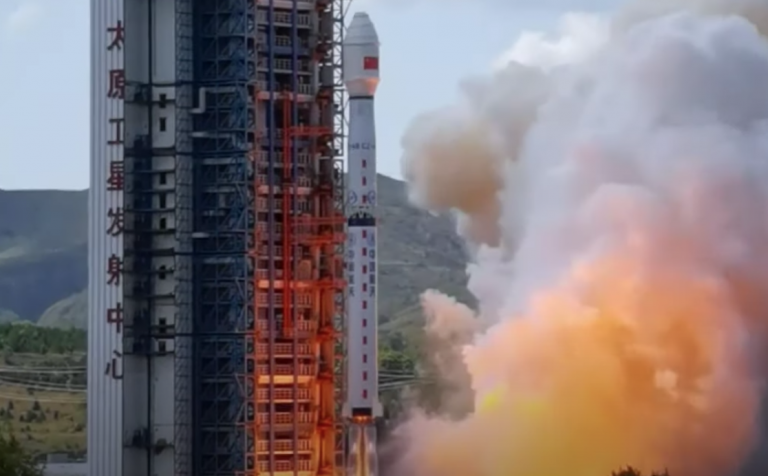 China has launched the Gaofen 11 (02) satellite. (Image: Screenshot via YouTube)

China recently launched a Long March 4B rocket, carrying a new satellite to space. While the launch was successful, some parts of the rocket ended up falling back on a village. The satellite, Gaofen 11 (02), is an optical observation satellite that is said to be able to display high-resolution images with features as small as 1 meter in length clearly visible.

Following the launch, several videos started circulating online showing parts of the rocket falling to earth. One video showed a rocket propeller landing near a residential area in the town of Sanya. Debris also fell on the town. According to residents, some of their homes were almost destroyed by the debris.

Several large rocket thrusters were seen falling from the sky, some crashing down with large explosions and releasing ominous orange smoke. The Long March 4B rockets apparently use a mix of nitrogen tetroxide and hydrazine, both of which have toxic effects on human health. One video shows a plume of smoke at a distance and seems to be taken from a schoolyard. Authorities neither confirmed nor denied the chaos caused by the falling debris.

This is not the first time in China that debris from a rocket launch has fallen in inhabited areas. Such things are normal in the country. Authorities usually calculate the areas that might be affected by the launch and evacuate people to safety. However, this time it seems as if such precautions were not taken. The Gaofen 11 (02) launch was the 25th space launch that China has done this year so far. This includes the launch of Tianwen-1, the first independent interplanetary mission sent by China. Three of the 25 launches ended up in failure. Back in January, one of the main state-owned space contractors stated that it was aiming for 40 launches this year.

The Gaofen 11 (02) is being planned to be used for land surveys, road designs, disaster prevention, crop yield estimation, land rights confirmation, and so on. The satellite will also be used in construction projects under the Belt and Road Initiative (BRI). Gaofen 11 (02) is a part of several other Earth-observation satellites launched by Beijing under the China High-Resolution Earth Observation System (CHEOS) project.

Back in May, a part of Long March 5B that was used to send a prototype crewed spacecraft in orbit crashed into the Atlantic Ocean. The Chinese space agency is said to have lost control of the rocket component. Such uncontrolled atmospheric reentry of space debris is not unique and does happen sometimes. However, what was uncommon was the size of the object, which was unusually large. In fact, this accident is the largest uncontrolled entry since the Soviet Salyut 7 space station crashed in 1991.

China also sent nine satellites recently using a Long March 11 rocket from an ocean platform in the Yellow Sea. This was the second ocean-based launch mission for the Chinese space agency. Some experts believe that such seaborne rocket launches could become a common feature of Chinese space programs.

Seaborne launches tend to be cheaper than land-based ones due to the fact that it is easier to calculate where the rocket boosters will come down so that they can be reclaimed. There are also fewer chances that the debris will fall on land in residential regions, making seaborne rocket launches quite safe as well.