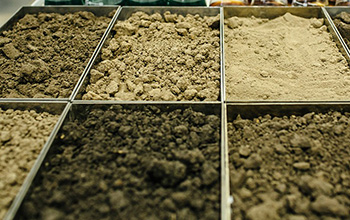 A new study shows that soil is significant as a driver of carbon sequestration. (Image: via ASU)

As harmful atmospheric carbon dioxide levels continue to increase, understanding the planet’s carbon balance is increasingly important. A new report by U.S. National Science Foundation-funded ecologists at Arizona State University has quantified the global soil carbon sequestration by roots and the amount leached into the soil. It reveals that climate and land use are major influencers of belowground carbon sequestration.

Scientist Osvaldo Sala of ASU and colleagues collaborated on the paper, published in Proceedings of the National Academy of Sciences. Using a newly developed approach to measuring carbon sequestration, the researchers discovered that belowground carbon sequestration accounted for nearly 46 percent of the planet’s total carbon fixation. Sala said:

“This work is important in the pursuit of a better understanding of the global carbon balance and how it responds to climate change.

“The new approach provides a comprehensive global quantification of root productivity that will help in modeling the global carbon cycle, and perhaps lead to new innovations in approaches for carbon removal.”

“The study will have a major impact on present and future estimates of how much carbon is fixed and stored by plants, critical information for future policy decisions in the face of global environmental change.”

Provided by: National Science Foundation [Note: Materials may be edited for content and length.]