The Moving Life Story of Xin Fengxia, Queen of Northern Opera, and Daughter of China (Part 2) 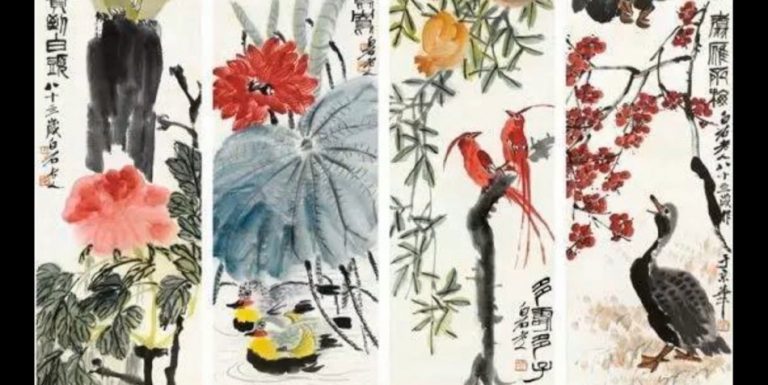 Even after suffering a stroke that left her paralyzed, Xin Fengxia was accepted as a student of the famous Chinese painter Qi Baishi. (Image: Screenshot via YouTube)

(This is Part 2 of Xin Fengxia’s moving life story, Part 1)

Their love for each other — one a renowned literary talent and the other the Queen of Pingju — touches the heart and is the admiration of the world. A talented man and a great beauty were brutally persecuted just because they were kind. Their enduring true love in times of adversity and peril has become legendary, as has their resolve at withstanding the evil assault battering upon them by the communist regime. This “Literary Couple” just wanted to be left alone to follow their own dreams, have a decent future for their children, and have a free nation for the Chinese people.

Tribulations of life for the ‘Literary Couple’

Every time he saw his wife’s strained mobility and difficulty in walking, Wu Zuguang would be reminded of how his wife was severely tortured and persecuted at the hands of those thugs and demons: the Chinese Communist Party (CCP). His wife’s injury was his eternal pain.

His wife, Xin Fengxia, despite having no formal education and her disabilities, had the fortune of being accepted as a student by Qi Baishi, a master of Chinese painting. Xin used her only movable right hand to painstakingly record word by word the many hardships of her turbulent life. She became a noted artist as well and composed Chinese paintings of plum blossoms, vines, pumpkins, and peaches.

The cruel persecution by the CCP made the couple appreciate each other even more, and the agonizing ordeals that were inflicted upon them were turned into a way for them to cultivate their own character, bringing inspiration to others. Despite Xin Fengxia’s disabilities, Wu Zuguang still maintained his determination into old age to fight the CCP. With Wu Zuguang by her side, in spite of her physical handicaps, Xin Fengxia was still able to author 28 books and paint thousands of paintings.

In the 23 years from the day of her disability till her death, Xin Fengxia left behind a collection of 4 million words containing her memories, including Queen of Pingju and Playwright Husband and I and Emperor Puyi. She also produced several thousand watercolor paintings in Qi Baishi’s style. On each painting, Wu Zuguang would write in calligraphy the words “husband and wife painting.”

After the Cultural Revolution ended in 1978, Wu Zuguang authored a five-series play called the Itinerant Players, which took him three months to complete. This is a comedy play full of bitterness that reflects the miserable life of Chinese artists and it was based on Xin Fengxia’s experience. Therefore, Xin Fengxia is the prototype of the heroine.

Wu Zuguang, who authored more than 40 plays and film scripts, once said: “I have written scripts for most of my life, but the one that made me most emotional and which I prefer the most is Itinerant Players!” This is because his wife had been horribly persecuted and severely beaten by a junior actor of the China Pingju Institute, which left her left knee broken and from which she never fully recovered.

Hong Kong media once reported that Wu Zuguang, who was pressured to leave the CCP in 1987 for daring to speak up, took the speedy disintegration of the CCP to be his greatest wish. It was also reported that he once pointed to a huge portrait of Jiang Zemin and disdainfully said: “Bully! You are actually trembling! I wonder when the Communist Party will fall!”

After Xin Fengxia’s death, Wu Zuguang was devastated and spent half a month trying to write a memoir entitled Memory of Feng.  For the first time in his life, this literary talent had difficulty in writing…. as he wrote, he wept and wept, then stopped….  He sat on the same seat that his wife used to sit on every day. For the remaining five years of his life, he would sit there in the morning and in the evening under the light in a daze as if his wife was still sitting there. His love for his wife and the bitterness of not having her by his side surpassed all the hardships that he had undergone in his life.

At the age of 86, on April 9, 2003, Wu Zuguang died of a heart attack. The date and month of his death are remarkable and coincided with that of Xin Fengxia, who passed away on April 9, 1998. For this reason, their son Wu Huan said during his father’s memorial service that he suddenly realized: “Mom and Dad are one soul and a match made in Heaven.”

There are people who say that in China it is rare to find a husband like Wu Zuguang and a wife like Xin Fengxia, not only in terms of their talent and achievements, but more so for their character and their resistance to the brutality and evilness of the CCP.

Xin Fengxia and Wu Zuguang leave behind a legacy of personal and artistic integrity, honor, and grace. Their lives convey to the world the true nature of having high moral standards and the divine inner resources we all have in the face of adversity.

It is truly amazing that their relationship and their family survived so many ordeals and tribulations. The pen is still mightier than the sword. Their footprints on the sands of time will inspire and uplift generations to come. Their plight and heroic stand awaken the conscience of humanity.

They were victimized and persecuted by the Chinese Communist Party. This crime is an indictment of the Party and all the corruption and evil it stands for. The dreadful plight inflicted on this couple only goes to emphasize the inhumanity, the soulless and degrading nature of communism. It is not human.