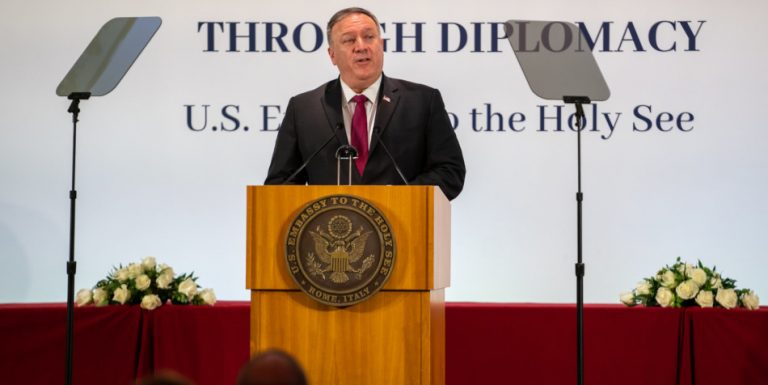 U.S. Secretary of State Michael R. Pompeo delivers a speech on 'Moral Witness and Religious Freedom' at the Holy See Symposium on Advancing and Defending Religious Freedom through Diplomacy, in Rome, Italy on September 30, 2020. (Image: U.S. Department of State / CC0 1.0)

U.S. Secretary of State Mike Pompeo has urged faith leaders to exhibit moral fortitude for the sake of religious freedom while singling out the persecution of faith in China during a Rome symposium attended by high-level Vatican officials.

In his keynote address given at the September 30 event, Pompeo gave the example of Father Bernhard Lichtenberg, a German Catholic priest, who died during World War II while resisting the Nazi regime’s genocidal campaign against the Jewish people.

“Today, as we think about that man, I urge all faith leaders to exhibit a similarly moral, bold witness for the sake of religious freedom, for human dignity, and for peace,” Pompeo said at the event organized by the U.S. Embassy to the Holy See, which is the governing body of the Catholic Church operating from Vatican City State.

“It was important for me to attend this year,” Pompeo said. “Because the mission of defending human dignity — and religious freedom in particular — remains at the core of American foreign policy,” he said.

“That’s because it’s at the heart of the American experiment. Our founders regarded religious freedom as an absolutely essential right of mankind and central to our founding.”

Pompeo went on to say that around the world authoritarian regimes, terrorists, and even secularist free societies are — in their different ways — trampling on religious freedom.

“Vast swathes of humanity live in countries where religious freedom is restricted, from places like Iran, to Nigeria, and to Cuba, and beyond,” he said.

Pompeo, who is an evangelical Protestant, went on to describe why the communist regime ruling China is the world’s worst abuser of religious rights.

“Nowhere is religious freedom under assault more than it is inside of China today. That’s because, as with all communist regimes, the Chinese Communist Party (CCP) deems itself the ultimate moral authority,” he said.

“An increasingly repressive CCP, frightened by its own lack of democratic legitimacy, works day and night to snuff out the lamp of freedom, especially religious freedom, on a horrifying scale,” he said.

“I spoke on this topic last year for a bit, and I paid special attention last year to the Uyghur Muslims of Xinjiang,” he said.

“But they’re not the only victims. The Chinese Communist Party has battered every religious community in China: Protestant house churches, Tibetan Buddhists, Falun Gong devotees, and more.”

Pompeo then described how China’s 10 million Catholics – split between the state-sanctioned Church and the underground Church – experience repression at the hands of the communist authorities.

“Catholic churches and shrines have been desecrated and destroyed,” he said, adding that Catholic bishops like Augustine Cui Tai have been imprisoned.

“And Catholic lay leaders in the human rights movement, not least in Hong Kong, have been arrested,” he said. “Authorities order residents to replace pictures of Jesus with those of Chairman Mao and those of General Secretary Xi Jinping.”

‘Constrained by the realities of world politics’

Pompeo went on to describe why it is important to “support those demanding freedoms in our time” and outlined the differences between what a government can do in relation to this and the Catholic Church which is the largest Christian Church, with approximately 1.3 billion baptized followers.

“Now, the United States can and does play its part in speaking up for those oppressed, although we too can do more. But we work hard to shine the light on abuses, punish those responsible, and encourage others to join us in this advocacy,” Pompeo said.

“But for all that nation-states can do, ultimately, our efforts are constrained by the realities of world politics. Countries must sometimes make compromises to advance good ends, leaders come and go, and indeed priorities change,” he said.

“The Church is in a different position. Earthly considerations shouldn’t discourage principled stances based on eternal truths. And as history shows, Catholics have often deployed their principles in glorious, glorious service of human dignity.”

Pompeo then gave examples of Catholics who have done so — philosopher Jacques Maritain who helped lay the intellectual foundation for the Universal Declaration of Human Rights in 1948 and Pope John Paul II who played a pivotal role in igniting the revolution of conscience that brought down the Iron Curtain.

He likewise added that the current head of the Catholic Church, Pope Francis, has spoken eloquently about the “human ecology” essential to decent societies.

“These examples, these remarkable examples of Christian action for freedom, justice, and human dignity shame those who are trying to drive faith from the public square,” he said. “But even more importantly, they should inspire us today, and especially those of you who hold spiritual authority of any faith, to lead in our own time.’

“As Christians, we all know we live in a fallen world. That means that those who have responsibility for the common good must sometimes deal with wicked men and indeed with wicked regimes. But in doing so — in doing so, statesmen representing democracies must never lose sight of the moral truths and human dignity that make democracy itself possible,” Pompeo said.

“So also, should religious leaders. Religious leaders should understand that being salt and light must often mean exercising a bold moral witness,” he said.

“And this call to witness extends to all faiths, not just to Christians and Catholics. It’s for leaders of all faiths at — indeed, at every level,” he added.

Pompeo’s speech in Rome occurred as the Vatican prepares to renew a controversial deal with the CCP over the appointment of bishops in China. The deal was first signed in 2018 and its details remain secret. Among its controversial aspects is the perception that the deal has bought the pope’s public silence over rights abuses in China. Many within the underground Church in China consider the deal a sell-out by the Vatican.

A day after the symposium, Pompeo met with Cardinal Parolin and Archbishop Gallagher in Vatican City where they discussed the importance of defending religious freedom and other human rights issues and expressed particular concern about the situation in China, said a statement put out by the U.S. Holy See embassy.

Before his two-day visit to Rome, Pompeo publicly called on the Vatican to do more in opposing the CCP’s rights abuses. He also called upon the Vatican not to renew the deal with Beijing, upsetting some top Holy See officials who deemed it an undiplomatic move.

“The Vatican endangers its moral authority, should it renew the deal,” Pompeo said in a tweet September 20 that included a link to an article ‘China’s Catholics and the Church’s Moral Witness’ that he wrote for the journal First Things.

You can watch Pompeo’s symposium address here in full: