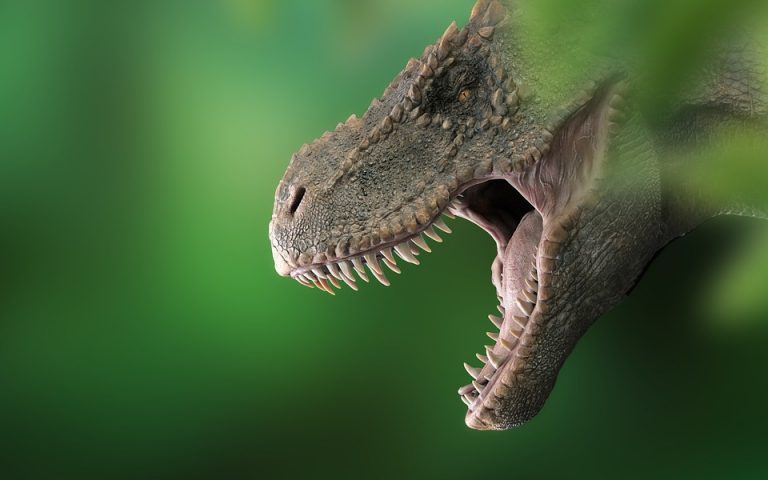 The analysis indicates a large possibility that the crocodile's ancestors walked on their hind legs much like T. Rex. (Image: Yuri_B via Pixabay)

If crocodiles scare you already, then this evidence of their ancient ancestors walking on two legs is guaranteed to terrify you.

In a recent paper published by Scientific Reports, crocodylomorph tracks were discussed. The analysis indicates a large possibility that the crocodile’s ancestors walked on their hind legs much like T-Rex.

The large 10-foot-long crocodile relatives walked on the Earth approximately 120 million years ago in what is now South Korea. Though no fossilized bones are in current possession, there are stones discovered with ancient footprints — one actually has a skin impression on it. They found the ancient footsteps at the Sacheon Jahye-ri track site, in the west of Sacheon City in South Gyeongsang Province.

Tracing the footprints of prehistoric crocodiles

The footprints were seemingly left by the back limbs, strongly suggesting that the crocodile’s ancestors had a heel-to-toe walking pattern. With tracks up to 9.5 inches long, the researchers think that these ancient crocodiles had legs about the same height as an adult human’s legs.

The measurements also led the researchers to assume that the size of the ancient animal was three meters long. The discovery dates back to the late Cretaceous Period, which occurred 145 million to 105 million years ago.

Korean researchers transferred the trackways to a lab after the initial discovery. Then, lead paper author Kyung Soo Kim invited Martin Lockley, professor emeritus geology at the University of Colorado Denver and co-researcher of the study. The paleoecologist at the Chinju National University of Education in South Korea asked for Lockley’s impressions of the discovery.

The team initially speculated that these fossilized tracks belonged to a pterosaur, a flying dinosaur. But Lockley has worked on similar studies in the past — crocodile prints from the Jurassic period in particular.

In comparison with the prints at the Sacheon Jahye-ri track site, the size of the crocodile tracks that the researcher studied was minuscule: only about 1 inch. However, the similarities between this study and the new one were striking. Lockley knew immediately that these ancient prints were of a Batrachopus specimen.

There were hints that these tracks were never really of the pterosaurs. For example, the flying dinosaur, even with their wings, might have walked on all fours. Researchers found no handprints or wing prints on the track site.

Pad and joint impressions that seem to belong to crocodiles are evident, on the other hand. And finally, the skin impression of one of the heels pieced together the mystery. Further analysis later confirmed the current conclusion.

Martin Lockley told Live Science magazine that this is the first proof pointing to the existence of some bipedal giant crocodiles from the Cretaceous Period that were similar to carnivorous dinosaurs.

Crodcodylomorph is a group of archosaurs that includes crocodiles — large, semiaquatic, and carnivorous reptiles — and its extinct relatives. The researchers named the new species Batrachopus grandis.

This new development calls for a possible re-examination of pterosaur footprints in Gain-ri, another South Korean site. There’s a possibility that the animals behind the Gain-ri tracks were smaller Batrachopus carefully treading mud.

In fact, University of Bristol (England) pterosaur expert Liz Martin-Silverstone agrees that the prehistoric discovery at the Sacheon Jahye-ri track site looks more like crocodilian descendants than that of pterosaurs. And she noted that, upon reexamination, previously described bipedal pterosaur trackways are actually the crocodile’s cetacean ancestry.

Mistaken identities can happen when it comes to prehistoric footprint analysis. “The tracks produced can change significantly, depending on things like what the animal was doing at the time the track was made, the nature of the substrate, where the center of gravity was, and what type of gait it had,” Martin-Silverstone explained.