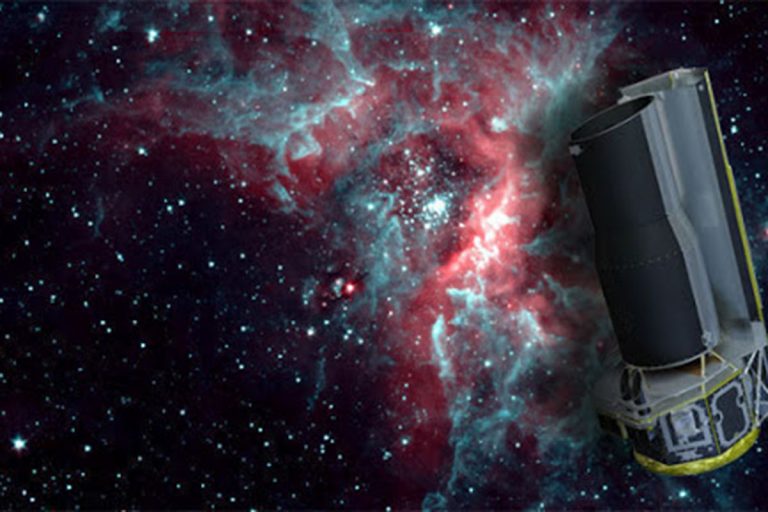 The Spitzer Space Telescope made many important discoveries in the solar system during its 16-year-long mission. (Image: JPL-Caltech via NASA)

To understand the significance of the Spitzer Space Telescope in the understanding of our Solar System, think of what the steam engine meant for the industrial revolution.

A national team of scientists published in the journal Nature Astronomy two papers that provide an inventory of the major discoveries made possible thanks to the Spitzer Space Telescope and offer guidance on where the next generation of explorers should point the James Webb Space Telescope (JWST) when it launches in October 2021. Carey M. Lisse, from the Johns Hopkins Applied Physics Laboratory, lead author of one paper titled “Spitzer’s Solar System studies of comets, centaurs and Kuiper belt objects,” said:

“The Spitzer Space Telescope made many important discoveries in the solar system during its 16-year-long mission, and it is important to capture the highlights of these with useful reference, to see how modern astronomy advances and for future scientists to use in their research.”

Lisse, a planetary astronomer passionately interested in how our solar system formed and evolved, put together the team of 27 authors who penned the legacy papers. The authors were selected based on the significant discoveries they made using the Spitzer Space Telescope during its 16-year mission. The team includes three University of Central Florida researchers, who offer suggestions for the next space telescope mission.

David Trilling, a planetary scientist and professor at Northern Arizona University, is the lead author of the second paper. When the Spitzer Space Telescope launched in 2003, it contained infrared detectors of unprecedented sensitivity, providing astronomers a never-before-possible look at the universe.

Scientists gained new insights into the composition of comets

Thanks to observations by the Spitzer Space telescope over the years, scientists gained new insights into, for example, the composition of comets, the icy surfaces of cold, distant bodies beyond Neptune, the heat radiation given off by asteroids, the extent of free-floating dust in the inner solar system, and the composition and properties of the atmospheres of Uranus and Neptune. The Spitzer Space Telescope even managed to discover a new ring of Saturn.

The much-delayed JWST, which will likewise study the infrared cosmos, is expected to build on the extensive results provided by the Spitzer Space Telescope, including taking the next step in our study of the solar system. Co-author on both papers Professor Yan Fernandez, who specializes in comets, said the papers include some of the projects he is most proud of in his career, adding:

“I think these papers demonstrate the return on investment for Spitzer. These space telescopes are taxpayer-funded, after all. More philosophically, Spitzer has brought us closer to those big questions about why the solar system and Earth are here in the first place.

Noemí Pinilla-Alonso said astronomy is based on patience and collaboration. She studies Trans-Neptunian Objects at UCF’s Florida Space Institute and contributed to the paper alongside institute post-doctoral scholar Estela Fernández-Valenzuela. Pinilla-Alonso is among a handful of scientists already guaranteed time on JWST once it is in place. She is part of the team that will be calibrating the instrument from the ground and said:

“Answering one question takes the effort of multiple scientists or groups, each of them with a unique set of skills. My contribution to this work is to provide the basic recipe of which ingredients are needed to build or cook an icy body in the solar system.  And this is a key piece of information that is needed to answer questions such as how did the solar system form? How has it evolved to its actual state? How similar or different is our solar system from the long list, more than 3,000, of exoplanetary systems discovered?”

“This work has helped us to understand what we could do with Spitzer data and how to use the JWST capabilities to shed light on issues that Spitzer could not answer. Using Spitzer we have been able to detect specific materials that were impossible to detect from ground-based telescopes, due to the atmosphere, or using the Hubble Space Telescope.”

“Now with JWST we will be able to obtain information on much fainter objects than is currently possible. I’m eager for that day as it will be a very important milestone for this research area. It will provide much more information on the formation of the outer solar system.”

The Spitzer Space telescope turned off

The Spitzer Space Telescope was turned off in January 2020, 11 years beyond its prime mission. Trilling said:

“Spitzer was sensitive to infrared radiation, as opposed to visible light. In many ways, Spitzer provided a view of the universe and of planetary bodies in our solar system that scientists had never seen before. This technological revolution produced new insights into the formation and evolution of our Solar System.”

Provided by: Zenaida Gonzalez Kotala, University of Central Florida [Note: Materials may be edited for content and length.]