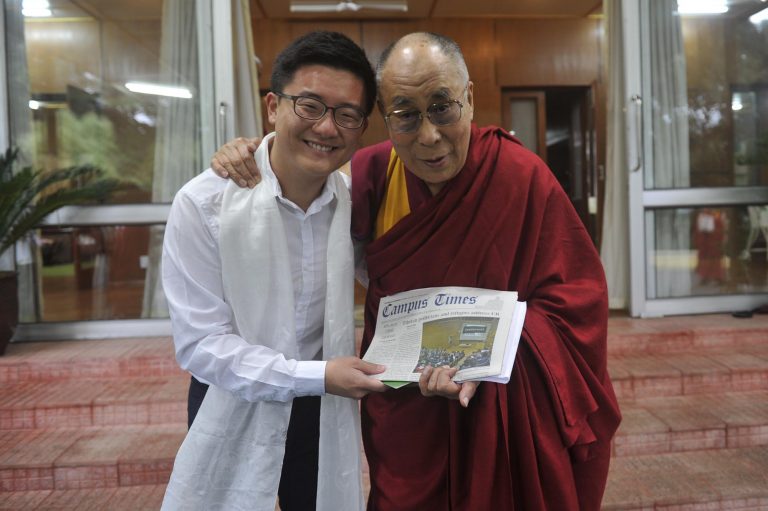 Se Hoon Kim holding a copy of U of R's student newspaper, Campus Times, with His Holiness the Dalai Lama. (Image: via University of Rochester)

Se Hoon Kim, a Korean-American student who hails from New Jersey and a graduate student at the University of Rochester, is a regular participant and co-ordinator of events and activities related to human rights abuses in China. Leading up to the time of every upcoming event, Kim would regularly encounter obstruction and intimidation tactics from the Chinese Students and Scholars Association (CSSA) on the university campus. CSSA is believed to have close ties with the Chinese Communist Party (CCP) and has branches in colleges, universities, and institutions outside China.

For virtually all of Kim’s human rights events, mainland Chinese students, mobilized by the CSSA, either attempt to get the event canceled through the university administration and/or interfere directly. On one occasion, the CSSA students requested to participate in an event and then, without any approval from the organizer, falsely claimed to represent the organizer in order to distribute CCP propaganda materials throughout the campus.

Last year, on September 21, tensions broke out on the campus. Kim moderated a dialogue entitled “Tibet Dialogue: Democracy-in-Exile and the future of Tibet.” During the opening session, the keynote speaker, a representative of the Dalai Lama gave his speech. Afterward, a Chinese student surnamed Xu who also attended the event laid out his argument. Xu quoted information from Wikipedia on the CCP’s claim that there are also Chinese Tibet groups.

He continued on and argued his own point on why Tibet needed to remain part of China. During that event, a group of Chinese students even distributed flyers to the audience members that contained blatant propaganda on “how happy the people in Tibet are under the leadership of the CCP.”

There was a heated argument during the dialogue session followed by an incident at Starbucks. At that time, several Tibetan monks coincidentally were in town, but they did not participate in the dialogue. Kim invited three of the monks over to the campus to meet the Tibetan students.  The monks, some students, and Kim met up at the campus Starbucks. There, they all engaged in discussing the philosophy of Buddhist meditation, as well as college life and other experiences over coffee.

The monks blessed the students and handed each of them a ceremonial scarf. While they were chatting, and minding their own business, all of a sudden, a Chinese student walked toward them, menacingly took a chair, sat next to the monks, and placed a sign near them that read: “Tibet is part of China.”

Kim immediately asked the other party: “What are you trying to instigate, and why are you doing this?” The monks quickly stood up, packed their things, and left the place. The Chinese student even pursued and followed them.

After this incident, a Tibetan student named None Gongyal revealed that he felt the same tension that he felt in his native Tibet. He said that he felt like he was still under threat from the CCP even in a country like the United States. The incident at the coffee shop made all the students, especially those who are anti-communists, feel that their freedoms were been threatened.

Kim was also not spared. He was harassed and attacked on the Internet, which felt like a death threat to him. However, Kim was undeterred and replied: “It doesn’t matter if I die, what matters is the right to express myself freely and I want to defend my rights.”

From then on, students at the university started to discuss what constitutes a “‘civilized” dialogue on campus. The next campus event that Kim participated in was on the persecution of the Uyghur people in China. Undoubtedly, this event was met with greater resistance, and students from both sides of the campaign filed their cases with the university administration.

During that time, the anti-extradition protests in Hong Kong were in full swing. On-campus, Kim organized activities in support of the Hong Kong protests. With the help of other students, Kim created a Lennon Wall for students to express themselves. In Hong Kong, the wall is mainly for post-it-notes to send messages advocating freedom, democracy, and universal suffrage.

The wall created by Kim was mainly populated by wall paintings with messages supporting the Hong Kong protests and even backing autonomy for Tibet and Taiwan and condemning the ethnic cleansing of Uyghurs in Xinjiang. Undoubtedly, these expressions of human rights and freedom encountered intense protests from the mainland Chinese students, who went all out to destroy the paintings.

For this reason, the students filed a petition on the Internet asking the university administration to ban the CSSA as it was an organization manifestly “promoting hatred” and “obstructing freedom of speech.” In the appeal to the university administration, it was stated that students from Hong Kong, Tibet, Xinjiang, and Taiwan and their friends on the campus have put a lot of effort and time into creating the wall paintings, but by the next day, these were all found to be smeared and covered over with hatred and nasty cartoons.

Many of these students who participated in the petition belong to the groups oppressed by the CCP in their home countries and have come here to seek a safe haven. The silence, turning a blind eye, and the inaction of the university administration toward the CSSA harassment and hatred must end. After this issue was raised, Chinese students of the CSSA quietly deleted the propaganda materials on the Internet and admitted that these were from the Chinese Communist Consulate General in New York.

Many media reported the controversy among students saying that the campus has become a battlefield for conflicts between the CCP and the people of Hong Kong. This “crossfire” did not dissipate until the outbreak of the COPVID-19 epidemic that forced the closure of schools and also the increasingly tougher U.S. policy toward the CCP.

On campus, actions were taken by the university administration to close the stretch of the underground walkway where students used to gather to express their opinions. This action was to prevent students from gathering there as the space is small and crowded and was not conducive to public health in view of the epidemic.

During the epidemic, Kim still continued to compile information on human rights abuses in China and at the same time learn about new cuisines of the various ethnic groups, such as Tibetan butter tea, Mongolian fried meat pies, and Xinjiang-style lamb skewers. While sharing with friends of the ethnic groups the various cuisines, Kim exchanged information about each other’s cultures.

Kim said that in attending to human rights abuses in China, he has learned many noble qualities of human nature, such as patience and forgiveness. “Whether it is from the Falun Gong practitioners or from the communities of Tibetans, Uyghurs, or house churches, I have seen their spirit of adhering to their values despite being attacked or persecuted. They have really shown true compassion that is the true, original human nature.”

He remembered the Falun Gong practitioner whom he met on the street in Flushing, New York.  What he saw was a truthful person who is kind to others. “She taught me a valuable lesson. I learned from her the heart of compassion and the nature of forgiving others. It enlightened me and I began to forgive those students who attacked me. It is also because I realized that my Falun Gong friends and other groups have suffered such terrible torture by the CCP that I had not encountered before so why can’t I forgive others?”

Kim has his own big dream — to become an expert in international politics and a lecturer.

“I do not aim to become that type of educator that merely transfers knowledge to their students but an educator that can provide their students with comprehensive information that allows them to think for themselves and reach their own rational conclusions. The Chinese Communist Party has established and regards itself as a god. It threatens our world of today. It is an evil existence beyond our imagination. If we don’t stop it, it will cause huge disasters for all mankind. This is why I want to be an educator as I want to make sure there is freedom and it is only through freedom that our society can be free from oppression.”

This is part two of a two-part series on human rights advocate Se Hoon Kim, part one can be read here.