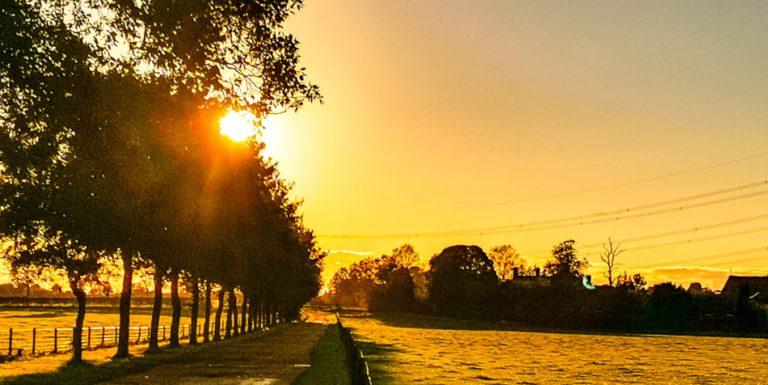 On October 1 every year, the Chinese Communist Party (CCP) authorities order the “blood flag“ to be hung up on all the streets of Mainland China.

This year, while the global COVID-19 pandemic, also known as the CCP virus, is still raging and oblivious to the rest of the world in lockdown, the display of covering every inch of the city of Wuhan in the “blood flag” is likened to the CCP spilling blood everywhere. The official hoisting of the red flag in Tiananmen Square is especially menacing, with people waving the mini “red flags” as they watch the banner being hoisted over them triumphantly.

Mr. Ouyang believes, from the perspective of feng shui, that the shade of red of the five-star flag resembles that of blood. “Blood flags” were meant to be displayed on altars in ancient times. Back then, blood sacrifices were used to channel negative energy from demon spirits. With regard to feng shui for the home, it is not auspicious to use a blood-red color. If one hangs up the “blood flag,” this act would set up a negative energy field that is full of evil spirits that may attract bloodshed. It is harmful to oneself, the family, business, and career.

As most people know, the CCP claims that the five-star flag, dyed with blood, symbolizes the so-called revolutionary martyrs, but in actual fact, in the 71 years since the CCP defrauded the people and took power in 1949, it continues to cause the deaths of millions of Chinese people through all its political purges. Thus, the five-star “blood flag” is soaked in the blood of innocent Chinese people. Just think of the red scarves being put on by Chinese primary school children as an extension of the red flag. How scary it is for kids to wear them.

Coming back to the death of millions of Chinese people caused by the CCP’s political campaigns, Mr. Ouyang said that they were all killed under the banner of blood and their souls became entangled with the intent of this “blood flag.” Wherever this flag is raised, these demon spirits will follow and control human emotions, affecting their bodies and disturbing their lives. As soon as the “blood flag” is raised, a negative field begins spreading throughout the surrounding area. Most people cannot see this negative field but many people can feel it and all are impacted by it.

Mr. Ouyang said that every day, the “blood flag” is hung on top of the Chinese consulate building and he can feel the bad energy in the area surrounding the building. According to him, the feeling of uneasiness is strong within this field. For this reason, he never goes near the Chinese consulate.

He said that in China, “blood flags” are hung up in various patterns to be flown on the streets. The energy field created by these “blood flags” has a magnetic force that draws and captures people’s souls. Some people go all the way to Tiananmen Square just to watch the flag-raising event. As the five-star “red flag” is raised, people get more and more excited. They become so drawn to it that they even return the next day to watch the same flag-raising event. In actual fact, these people are drawn into it like a vortex and it is very dangerous for their souls to be sucked into this negative energy field.

How can the ‘blood flag’ bring bloodshed to people?

Mr. Ouyang also recommended the best-selling book The Secret by Rhonda Byrne, an Australian author. The content of the book is very wide-ranging with a small bit of coverage on feng shui. In her book, Byrne states that everything is energy. And based on the theory of modern physics, everything that is tangible or intangible, visible or invisible, matter or ideology; everything is energy that can be transformed from one form into another.

The CCP’s five-star flag has been officially defined by its creator as a “flag stained with blood.” When this definition is accepted by the public, the corresponding energy will be transferred to each “blood flag” even if there is no real blood. The effect is just the same. This is the reason why the “blood flag” brings disasters as it conjures up the bloody and fierce feng shui.

From Mr. Ouyang’s analysis and empirical evidence, any of the CCP’s “blood flags” hung up in the house must be removed and burned in the open under the morning sun.

Mr. Ouyang explained further that when you hang up the “blood flag” in your dwelling place, you are actually inviting those spirits into your home. You need to forcibly chase them away. These entities are of the negative “yin” energy. They are afraid of fire and the morning sunlight, so it is said that burning under the sun can dispel evil spirits and eliminate bloodshed.

The core of the book The Secret talks about the Law of Attraction. Simply put, this law is about whatever we think, whatever we focus on, whatever we want, has the power to attract into our lives and materialize those thoughts into reality.

So when hanging up the flag, it is because you want it, you want to focus on it, and this power of the mind can be transformed into your living space in the form of energy. Correspondingly, this impacts on individuals such that they will fall sick, have a family break-up, some interpersonal discord, business failure, or even more dangerous disasters.

So according to what is stated in the book, it is only through burning the CCP’s five-star “blood flag” out in the open under the morning sun that one can really avert the disaster caused by it.

The ancients advised us to live in harmony with Heaven and Earth, to be righteous in all our ways, and to be kind to others. This is the best feng shui in the world and no curse, evil, or ill will can hold any power over us if we follow it. Keep close to our divine nature, live in constant gratitude, and have a righteous heart. Doing good to others and wishing well to others overcomes all adversity, and brings us back to life.