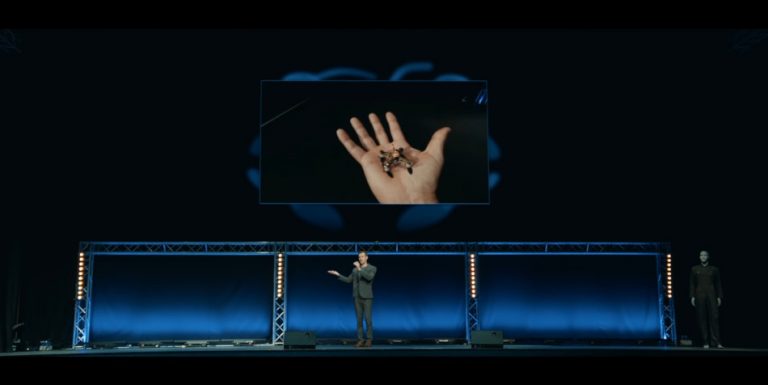 A short film by a coalition of AI researchers and advocacy organizations depicts a possible future scenario where drones are used as autonomous killing machines. (Image: Screenshot via Youtube)

A short film depicting a future where AI killer drones mass murder human beings is raising serious questions about how safe people are going to be in a world of unrestrained technological development.

Created by the Future of Life Institute (FLI) to educate the public about the necessity of setting up controls over AI killing machines, the short film shows people being hunted down in lecture halls by numerous highly efficient drones. And what is truly scary about the film is that all the technology for such a scenario almost exists.

At present, drones used for violent military missions are closely monitored by a chain of command that involves human beings. But once AI gets advanced enough, decisions on whether to kill someone or not could be left for the drone to decide. And once the human race crosses that line, the results could be catastrophic. Even more of a threat is the very likely possibility that criminals will start using killer drones for such violent attacks.

“While government ministers and military lawyers are stuck in the 1950s, arguing about whether machines can ever be ‘truly autonomous’ or are really ‘making decisions in the human sense,’ the technology for creating scalable weapons of mass destruction is moving ahead. The philosophical distinctions are irrelevant; what matters is the catastrophic effect on humanity,” Gizmodo quotes the FLI’s scientific advisor Stuart Russell.

The necessity of a ban on killer drones

The demand to ban the development of killer drones is gaining ground very fast. And this mostly has to do with the fact that drones allow criminals to kill people without being physically present.

Usually, the criminal would have to be very near the target in order to kill them. This in itself carries a tremendous risk for the criminal, which might actually deter them from carrying out their plan. There is a chance that such criminals might be spotted during the act or during the events that led to the act. And this provides a chance for law enforcement to catch and prosecute the criminal.

However, killer drones completely remove such risks. A criminal can stay far away from the target, rig up a drone with explosives, direct it toward the person, set off the bomb, and kill the target. This would leave very little physical evidence of the criminal actually committing the murder.

And once criminals realize that they can now murder people using drones with little to no risk, social order itself will be in danger. Even an average person who has never committed a crime in their life might end up killing someone just because drone technology was within reach.

“The Campaign to Stop Killer Robots is not trying to stifle innovation in artificial intelligence and robotics and it does not wish to ban autonomous systems in the civilian or military world. Rather we see an urgent need to prevent automation of the critical functions for selecting targets and applying violent force without human deliberation and to ensure meaningful human control for every attack,” Future Of Life quotes Noel Sharkey from the International Committee for Robot Arms Control.

The necessity of enforcing a worldwide ban on killer drones and robots is a matter that requires immediate attention. And the leaders of the world better take the necessary action quickly before killer drone technologies are available for anyone to use.