The Legend of Chinese Lanterns 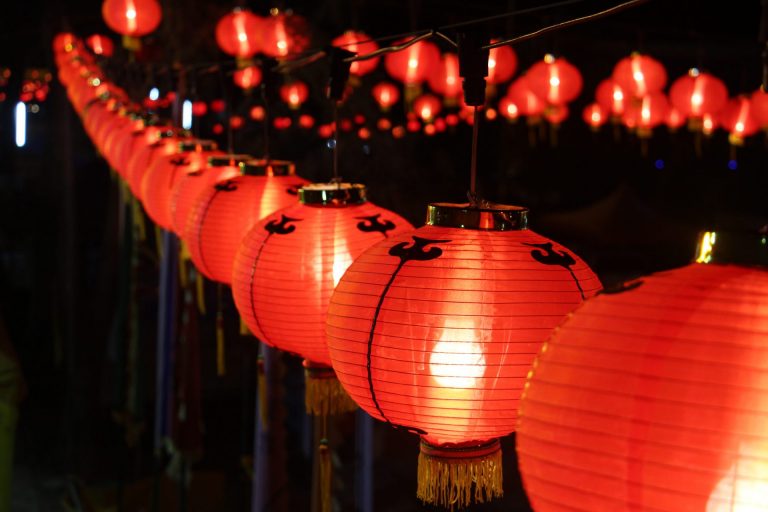 Every year during the Chinese Lantern Festival, people hang up red lanterns to create a festive atmosphere because lanterns are a symbol of reunion. (Image: Dante Tee via Pexels)

Chinese lanterns, also called colored lanterns, originated in China approximately 1,800 years ago during the Western Han Dynasty. Every year, during the Lantern Festival, which falls on the 15th day of the first lunar month, people hang up red lanterns to create a festive atmosphere because lanterns are a symbol of reunion.

There are many different decorations that appear on Chinese lanterns that can be divided into figurative motifs, landscape designs, flower and bird motifs, dragon and phoenix motifs, and fish and insect motifs. In addition, there are revolving scenic lanterns for people to play with.

The shapes of Chinese lanterns also vary. The most traditional design in an oval shape in the color red, decorated with golden tassels. Sometimes, this lantern design also comes in a square shape.

The materials used for Chinese lantern making also vary. Commonly, the frame is fabricated from bamboo, wood, rattan, and steel wire. The shade is made from either silk or a semi-transparent paper. The decorations are applied using different methods — calligraphy, paint, embroidery, and paper cut-outs.

Apart from being used to add light and atmosphere to the night, Chinese lanterns carry a symbolic meaning. According to the Taiwanese lantern guru Wu Dunhou, lanterns used at weddings (palace lanterns) are symbolic of joyous celebrations, while bamboo splint lanterns signify a funeral notice.

In ancient times, when school began in the first lunar month of the year, parents would prepare a lantern for their children, which would be lit by their teachers to symbolize a bright future during the year to come. This lantern-lighting ceremony has evolved into the custom of carrying lanterns throughout the Lantern Festival.

The custom of admiring lanterns during the Lantern Festival originated from the early years of the Han Dynasty. During the Kaiyuan era in the Tang Dynasty, people made lanterns in the shape of a dragon, with flashing lights to celebrate peace and prosperity. Since that time, the lantern culture has become widely popular.

When Zhu Yuanzhang of the Ming Dynasty moved the capital to Nanjing, tens of thousands of lanterns were launched along the Qinghuai River. During the reign of Emperor Yongle, in addition to erecting the Dali Bie Shan Lamp Post at the Meridian Gate, he also established a lantern market outside the Hua Gate. In fact, there is a street named Dengshikou (lantern market) in Beijing today.

Legends of the origin of the Lantern Festival

There are many legends about the origin of the Lantern Festival. The most popular one is as follows. The custom of displaying lanterns at the Lantern Festival originated in the Eastern Han Dynasty. Emperor Mingdi was a devoted Buddhist, and he was told that it was a tradition to light lanterns to worship Buddha on the 15th day of the first lunar month.

To promote Buddhism, Emperor Mingdi thus ordered that in addition to the palace and temples, all his subjects should display lightened lanterns in the evening of this day. Gradually, this Buddhist ritual became a popular festival. The origin of palace lanterns is thought to have come about as follows. During the Yongzheng era in the Qing Dynasty, an old man in Hebei Province was very skillful in lantern construction.

One day, the old man made several lanterns and sold them at the market in Gaocheng County. One particular day, he happened to bump into the county magistrate, who was taking a stroll, and liking the lanterns very much, the magistrate bought all of them at once. The Chinese lanterns made by the old man were very unique and gorgeous, with exquisite workmanship.

The magistrate adored them so much that he regarded them as treasures. That year also happened to be the time to pay tribute to the emperor, so he thus parted reluctantly with some of the lanterns and offered them as a gift to the emperor.

The emperor was extremely exhilarated upon seeing the lanterns. In addition to heavily rewarding the magistrate, the emperor also appointed these lanterns as tributes. Afterward, the red lanterns were hung up all over the palace, as they were officially used as the lanterns that were exclusively made for the royal court. That’s how these lanterns got their name — palace lanterns.

In the streets of the big cities and small villages in China, red-colored lanterns set the scene during festivals, especially Chinese New Year, the Mid-Autumn Festival, and the Lantern Festival.

The best places to see a traditional lantern display are Beijing, Hong Kong, and Nanjing. In Beijing, temple fairs are held in various venues throughout the city where Chinese lanterns can be seen everywhere.