Why China Is Going to Mars 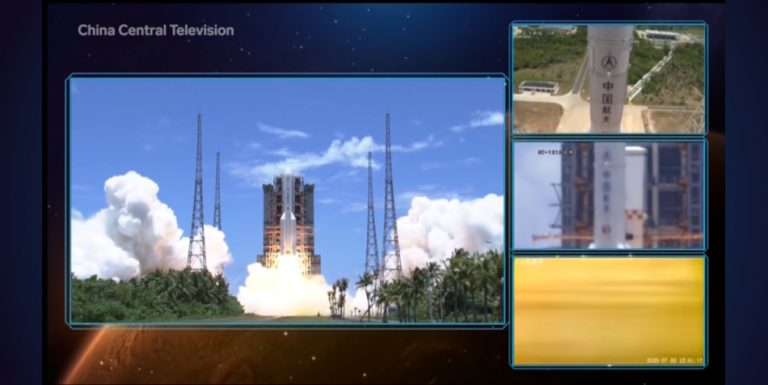 In July, China launched its first Mars exploration mission called Tianwen-1, consisting of an orbiter, rover, and a lander. (Image: Screenshot via YouTube)

In July, China launched its first Mars exploration mission called Tianwen-1, consisting of an orbiter, rover, and a lander. The objective of the mission is to look for evidence of both past and current life on Mars as well as analyze the environment of the planet. The mission is expected to reach the planet in the first quarter of 2021.

There are several reasons why China is sending a mission to Mars. The first is that the mission is basically something that any powerful space organization is expected to complete. The U.S., Russia, the EU, and India are the four nations that have successfully launched missions to the red planet. China clearly does not want to be seen as inferior to these nations in this regard.

A Mars mission indicates that the country’s space agency is now technically equipped to conduct interplanetary operations. Back in 2016, the father of China’s lunar probes, Ye Peijian, noted that China wants to achieve success in completing orbiting, landing, and roving in one mission, which is something that has not been done before and will allow Beijing to send a strong message to the world about its space capabilities.

China’s Mars mission will conduct several experiments through its six scientific instruments. This includes mapping the subsurface of the planet, searching for signs of permafrost, and so on. Beijing hopes that the mission will allow the country to cement its position as an important producer of deep space knowledge. Finally, the Mars mission is a part of China’s overall plan of establishing an independent space infrastructure solely managed by the Chinese government. Together with its BeiDou satellite constellation, an upcoming space station, and Moon missions, having a presence on Mars is seen as critical to strengthening global leadership in the space field.

John Zarnecki, an expert in space science, believes that China’s Mars mission will trigger a second space race that will have “no military boundaries.” He also believes that Mars will be colonized by around 2040. “Russia is not a big player now. They have the potential to be, and maybe we will see a resurgence… But, to be honest, they’ve made lots of announcements over the years which have not come to very much… The Space Race, if there is one, is going to be between the US and China… China doesn’t make mad claims and they are, by their own admission, behind the Americans, but they are catching up very fast,” he said to Express.

Some astrophysics point out that even if the chance of life existing on Mars is small, it is the obligation of humanity to ensure that they do not contaminate the environment with Earth-based microbes. Such contamination could disrupt the evolution process of native life. When it comes to back contamination, scientists usually rule out the possibility of a Martian microbe entering Earth and causing a pandemic. However, to say that such a thing can never happen would be wrong.