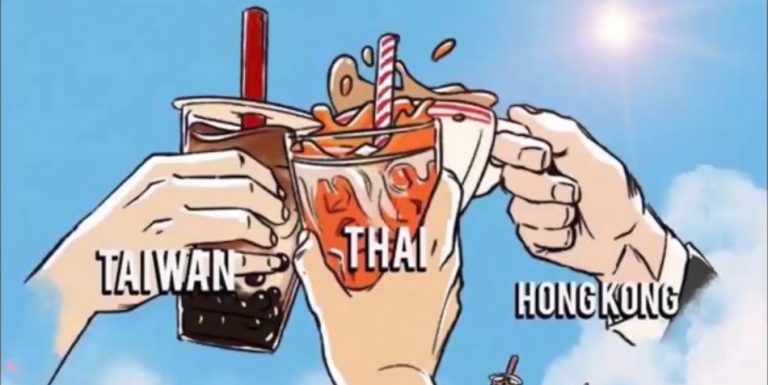 The ‘Milk Tea Alliance’ is a democratic movement supported by citizens from Taiwan, Thailand, and Hong Kong that started as an Internet meme. (Image: Screenshot via YouTube)

The “Milk Tea Alliance” is a democratic movement supported by citizens from three regions — Taiwan, Thailand, and Hong Kong. Initially, the movement started as an Internet meme to counter the Chinese trolls and nationalists that plague social media. However, the meme soon became a solidarity movement against authoritarian regimes.

Milk tea is a popular drink in several Southeast Asian nations. In contrast, tea is mostly drunk without milk in China. This is why the anti-authoritarian movements in Thailand, Taiwan, and Hong Kong are using the term Milk Tea Alliance, indicating they’re against the Chinese regime and its communist policies.

The Milk Tea Alliance came into existence in April after a Thai celeb couple was criticized by some Chinese netizens for supporting the independence of Taiwan and Hong Kong. Soon, the hashtag #MilkTeaAlliance began trending on Thai Twitter, which eventually became popular in other regions as well.

According to Wasana Wongsurawat, an expert on China at Bangkok’s Chulalongkorn University, anti-Beijing sentiment is an inseparable part of the Thai people’s fight against authoritarianism. As such, it was inevitable that Thai protesters, who are demanding reforms to the constitution, would lend their support to protesters in Hong Kong and Taiwan who are up against the Chinese regime. On August 16, Thailand saw the biggest anti-government protests since 2014.

“Hong Kong, Thai, and Taiwanese protesters are brave in fighting for democracy in the face of tyrannical regimes… They are taking massive risks by speaking out and resisting… I wanted to show my support for these democracy movements and I hope that what’s happening in Thailand and Hong Kong will help to inspire change and bring about true democracy in Asia,” Roy Ngerng, a human rights activist from Singapore said, as reported by Vice.

He points out that Beijing is being increasingly seen as a threat to democratic institutions since the Chinese Communist Party (CCP) is expanding its influence beyond China’s borders. Ngerng warns that a strong China might make some governments think that they do not need to adhere to democratic values.

In addition to Thailand, Taiwan, and Hong Kong, other nations have also been pulled into the online Milk Tea Alliance. After tensions between India and China spiked following border clashes, the South Asian nation has been included in the alliance by some online activists.

Australia’s call for a World Health Organization investigation into the coronavirus and the subsequent threat from China has prompted some people to include the country in the Milk Tea Alliance. Belarus is another country that is sometimes made a part of the alliance following protests for a fair presidential election.

Each of these nations has been linked to the Milk Tea Alliance by a specific drink that best represents them. For Hong Kong, it’s milk tea. Taiwan is represented by Bubble Tea and Thailand has Thai Ice Tea. India has Masala Chai. For Belarus, the traditional fermented milk product, Ryazhenka, is the symbol. In the case of Australia, the milk product Aptamil is used.

Some reports suggest that the pro-democracy protests in Thailand could soon turn violent. The protests, which have been happening for the past five months, have mostly been peaceful. In addition to reforming the constitution and monarchy, protesters are also demanding the resignation of Prime Minister Prayuth Chan-ocha.

Of late, those who support the monarchy and existing governance model have been holding counterprotests. Some experts believe that the two sides might eventually clash with one another violently. This would give the country’s military the perfect excuse to intervene and even stage a military coup. Thailand last experienced a military coup in 2014. Interestingly, this coup was engineered by the current prime minister.