How Zhuge Liang’s Feather Fan Was Made 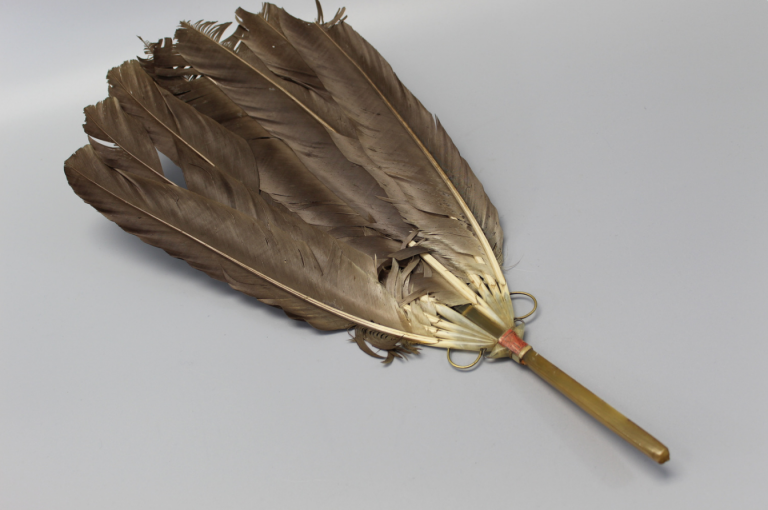 Learning the Dao from a master

Zhuge Liang grew up in a poor family. By the time he was eight or nine years old, he had not been able to speak. An elderly Taoist in the nearby mountain saw his wisdom and good inborn quality, so he cured Zhuge Liang’s mute illness and taught him astronomy, geography, the Eight Diagrams, and the arts of war. From then on, Zhuge Liang followed the Taoist. He climbed up the mountain every day to learn from the Taoist without hesitation, rain or shine.

One day, when Zhuge Liang went down the mountain, it suddenly got windy and stormy. He went to a deserted temple to avoid the rain. However, a woman ushered him inside the temple. For the past eight years, although Zhuge Liang had traveled up and down the mountain, he had never seen any other person living on the mountain. After that, every time he passed by, the woman would enthusiastically welcome him. The two were very happy playing chess and games. Soon, Zhuge Liang became confused. He could not follow what the Taoist said, nor could he remember the teachings.

Seeing this, the Taoist said to him: “If the wind does not come, the tree does not move; if the boat does not shake, the water does not get blurred.” He pointed to a tree in the courtyard and asked Zhuge Lian: “Look, Why isn’t the tree growing up? It is not dying, but it is not growing lively either?”

Zhuge Liang was talented. He saw vines growing around the tree. He said: “The tree could not grow because it is entangled with vines.” He immediately understood that the master was warning him that lust is just like vines. Once he was entangled, it would be hard for him to grow.

Understanding that he was enlightened, the Taoist explained that the woman was originally a crane in the Temple of Heaven. Because she stole peaches from the goddess, the Queen Mother of the West, she was sent to the human world to suffer and atone for her misdeeds. However, the crane had ignored her duty to cultivate her morals, and instead indulged in pleasure. “If you continue to be confused by her beauty, all your efforts in the past will be in vain.”

Zhuge Liang take the feather as a lesson learned

Following the Taoist’s instruction, Zhuge Liang burned the crane’s clothes at midnight. Seeing fire in the template, the crane came back from the galaxy river and tried to peck Zhuge Liang’s eyes. Zhuge Liang picked up the crutch and knocked the crane down to the ground. He reached out to catch the crane, but it struggled to break free and flew away. Zhuge Liang only caught the tail feathers of the crane.

In order to remind himself not to waste his time and ruin his studying, Zhuge Liang made a fan with the tail feathers of the crane. He brought the fan with him as a lesson learned.

The clear breeze of the fan

Since ancient times, fans have been very popular among the Chinese literati and martial arts heroes. The literati wrote poems and painted on fans, whereas the warriors used fans as weapons to defend or attack. Fans were also used as tokens of affirmation.

During the Eastern Jin Dynasty (266-420), Yuan Hong was appointed to serve as a local official. Duke Xie An gave him a fan and encouraged Yuan Hong to send a benevolent and righteous atmosphere to the local people. Since then, the fan has added the meaning of “breeze of benevolence and righteousness.”

During the Tang Dynasty (618-907), Emperor Taizong gave officials fans made of calamus. Calamus was known to give off a clean scent that was believed to ward off evil. It was meant to encourage officials to “fan the breeze while increasing the virtues.”