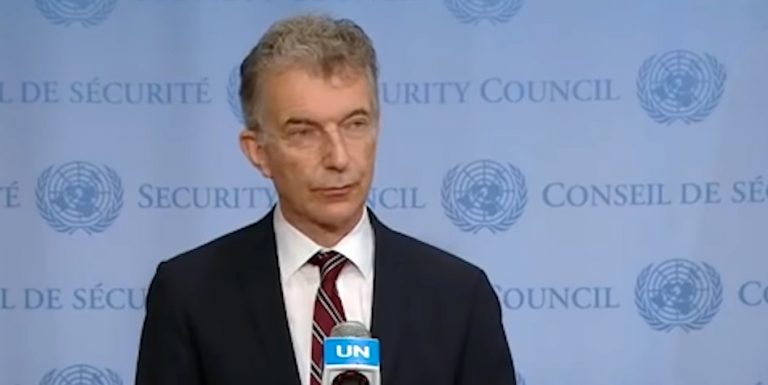 Diplomats from 39 Western nations have criticized China at the United Nations for violating the human rights of Uyghur Muslims, as well as compromising the autonomy of Hong Kong. UN Director Louis Charbonneau admitted that the organization must create an international mechanism to track and report rights violations committed by the Chinese regime.

“We call on China to respect human rights, particularly the rights of persons belonging to religious and ethnic minorities, especially in Xinjiang and Tibet… There are severe restrictions on freedom of religion or belief and the freedoms of movement, association, and expression as well as on Uighur culture… Widespread surveillance disproportionately continues to target Uighurs and other minorities, and more reports are emerging of forced labor and forced birth control, including sterilization,” German Ambassador Christoph Heusgen said on behalf of 39 nations, as reported by VOA News.

Heusgen asked China to shut down the detention camps being used to hold Uyghurs. He noted that last year only 23 nations joined to condemn China on the Uyghur issue. The fact that the number grew to 39 is an indication that countries all across the world are becoming increasingly concerned about the Chinese regime’s policies towards minorities. British envoy Jonathan Allen asked Beijing to allow UN High Commissioner for Human Rights Michelle Bachelet to visit Xinjiang and assess the Uyghur situation independently. He also condemned the imposition of the National Security Law in Hong Kong.

Though the U.S. did not make any official statement at the UN session, they are one of the 39 countries that issued the joint condemnation. Chinese ambassador Zhang Jun refused to address the Uyghur issue and instead lectured the U.S. to “take a good look in the mirror” and deal with the racial discrimination prevalent in its own society. Jun highlighted the Black Lives Matter issue, proposing that America has been facing racial injustice for decades.

However, what Jun fails to admit is that whatever racial issues exist in the U.S., they are social issues and not products of any law or government policy. In contrast, the persecution of Uyghurs is a policy adopted and implemented by the Chinese government. Comparing the two is like comparing apples with oranges. Interestingly, China received the support of 50 nations, far more than the 39 countries that gave the joint statement. The countries that supported China include North Korea, Syria, Iran, Venezuela, and so on. Some reports suggested that a few Western countries were pressured not to be a part of the 39 nations.

The Chinese regime has been cracking down on religious groups with greater zeal in recent times. Buddhists and Christians have been forced to avoid funeral and wedding ceremonies. One Buddhist from Liaoning Province was arrested for reciting chants for the dead. The government even sent around 80 people to demolish his home and confiscated all Buddhist items he owned. In May this year, Chinese authorities imposed fines on a church for sending its choir for a member’s wedding. The church was shut down for a month.

The government is also cutting down the subsistence allowances of religious people. In May, a 70-year-old man was ordered by authorities to put his Christian publications in water. Last year, he was forced to replace the cross at his home with portraits of Xi Jinping and Mao Zedong. The officials threatened to withdraw his impoverished status should he be found participating in religious gatherings.