3 Things to Know About the Asian Paradise Flycatcher 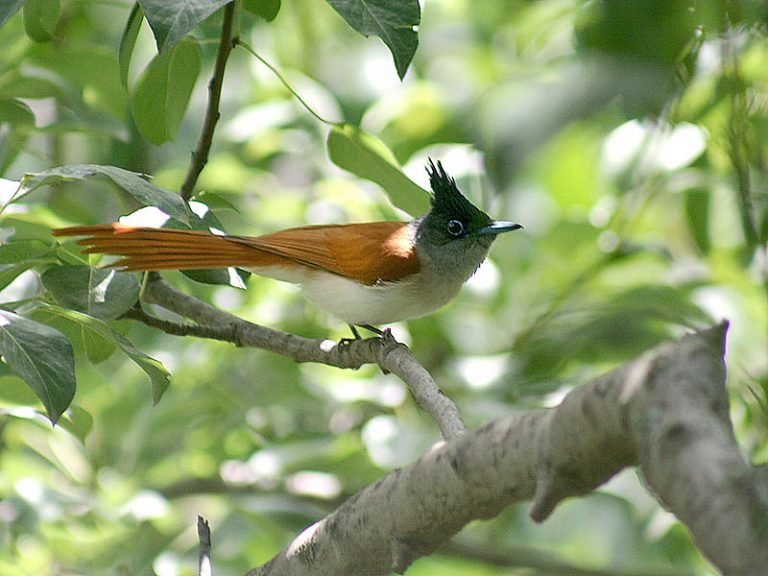 There are 14 subspecies of Asian Paradise Flycatcher. (Image: GNU FDL via Wikimedia Commons)

The Asian Paradise Flycatcher is a species of bird that is native to India, Asia, and Central Asia. Scientists have identified around 14 subspecies of these birds, classifying them based on their plumage. In wildlife, these birds are usually found in well-wooded habitats and thick forests.

3 facts about the Asian Paradise Flycatcher

Adult flycatchers can reach up to 8.7 inches in length, excluding the tail that can grow to 9.4 inches. The wings usually are around 3.6 inches long. The legs of these creatures are on the shorter side and they tend to sit pretty upright when perched. The male bird of the species usually comes in two variations — one with white plumage and another with chestnut plumage.

Birds with white plumage only exist in some subspecies. Both the body and wings of the bird will be white with dark streaks. The eye rings of the birds tend to be blue while the bill is black, round, and sturdy. Birds with chestnut plumage usually have the color on the wings and tail. The crest and crown look glossy and are black in color.

Juvenile males do not have the two long central tail feathers that are characteristic of the bird. They only acquire these features when they are 2 or 3 years old. The females usually only come in a chestnut color. They do not have the blue eye rings that are commonly seen in males. The females also have smaller crests and shorter tails. Adult birds can be pretty noisy. One of the most common calls among the Asian flycatchers sounds like a sharp “zweet.” The Indian variant is known to use a sharp “skreek” noise.

These birds breed during the months of May to July. They are monogamous in nature, with both male and female birds sharing duties like building the nest, incubating the eggs, protecting the young ones, and feeding the family. The cup-shaped nest is usually made from twigs that are intertwined with spider webs. Such nests are located on the lower end portion of a tree branch.

The Asian Paradise Flycatcher birds are known to set up their nests close to Drongo nests. This is done to keep predators away from their homes. The female lays around 3 to 4 eggs at a time, which look reddish-brown to pale cream in color. The eggs are incubated for a period of around 14 to 18 days, with the chicks hatching in 21 to 24 days.

Asian Paradise Flycatchers largely feed on insects. The birds hunt in the understory of canopy trees. These creatures are mostly found in the Indian subcontinent. In places like the Maldives and Korea, they exist in sparse numbers, while in Singapore, they are considered to be extinct.

The flycatchers tend to be migratory in the northern regions of their habitat, like Afghanistan, Korea, and Northern China. However, the birds located north of southern China usually migrate to the south during the winter season. The chestnut-colored variations are typically found in the southeastern part of their habit. Intermediate forms that have chestnut and white colors are mostly found in India.