The Innocent Macaque Monkeys of Taichung 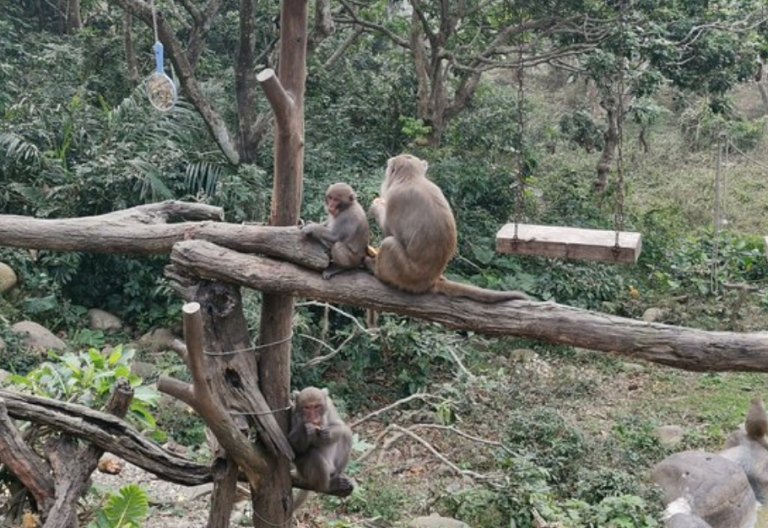 Uncle Guo has opened up his orchard to wild macaques for nearly 25 years. (Image: via Trip Advisor)

Uncle Guo, who grew up in Dakeng, Taichung, as a farmer’s son, often chased off the Taiwanese macaque monkeys to protect his orchard from their hunger. Now, he has opened up his orchard to them and has coexisted peacefully with the wild macaques for nearly 25 years. He also uses unique whistles to communicate with the monkeys. Their way of getting along with each other is fantastic.

There is also a monkey family. The monkey mother helped the little monkey catch fleas, just like a human mother helps her children to take care of themselves.

As well as the cute macaque monkeys in the park, there are also stone monkey paintings. I admire the staff in the park. They are so imaginative to paint all different shapes of stones so vibrantly. If you like monkeys, please come and visit the monkey park.

Uncle Guo shared his experience with us about what the monkeys like to eat. There are more than five kinds of local fruits and vegetables, including pineapples, bananas, guavas, pumpkins, and oranges, that monkeys enjoy. He said that the monkeys are used to going out to gather food early in the morning. Uncle Guo saw most of the monkeys were thin and malnourished and had to collect food going from one mountain to another. So he gave them some food to eat.

However, Uncle Guo only gave traveling monkeys food. This way he hopes that the wild monkeys can maintain the ability to survive on their own and he can also provide the monkeys with unsold fruits. He is delighted to see the monkeys growing up day by day, and they can also play freely in his park. He is also pleased to see the peaceful coexistence of natural animals, plants, and human beings.

If you want to learn more about the macaque park, I provide the following information and announcements for readers’ reference. I hope that with the easing of the international epidemic, you can visit Taichung, Taiwan, to have a good time with these cute elves.