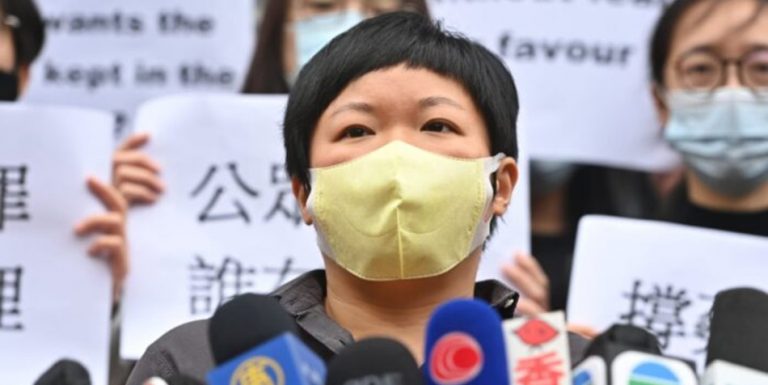 Hong Kong reporter Bao Choy speaks to the press before her court appearance. (Image: via The Epoch Times)

On November 10, a TV producer from Hong Kong appeared in court. Her crime — she is accused of making false statements to obtain vehicle records. The Hong Kong journalist, Choy Yuk-ling aka Bao Choy, used these records to produce a documentary for TV station RTHK that examined how the Hong Kong police reacted slowly to a mob attack on commuters at the Yuen Long Metro station last year. Though she was released on bail, her arrest has raised concerns about the tightening restrictions on press freedoms in the city under the Chinese Communist Party (CCP) regime.

The individuals carrying out the attack at the metro have long been suspected of being Triad members, an organized crime syndicate based in Hong Kong. The documentary exposes these people’s ties with local leaders of the community, with the connections having been made by looking at the license plate numbers of the cars used in transporting the attackers. After producing the documentary, Bao Choy was arrested for violating Hong Kong’s Road Traffic Ordinance.

The Hong Kong Journalists Association condemned the arrest, noting that gaining access to publicly accessible databases like vehicle registration information is a normal part of an investigation. They accused the police of abusing the Road Traffic Ordinance and suppressing regular reporting activities, thus damaging press freedom in the city. Hong Kong Chief Executive Carrie Lam has defended the arrest, claiming that it does not violate the freedom of the press.

When Bao Choy was brought to court, numerous protesters gathered outside to show their support, including staff members of RTHK. Choy thanked the people who supported her during her detention. “It has been a common practice for years that journalists do research or searches on cars, vehicles, and land for the purpose of journalism… I understand this incident is no longer a personal matter but a matter related to the public interest and press freedom in Hong Kong,” Choy said, as reported by The Epoch Times.

Daisy Li, editor-in-chief of a local news site called Citizens News, notes that the local media outlets have been angered by Choy’s arrest and she believes that the strong support Choy has received is an indication that the media won’t stand for being suppressed by the state. Cale Brown, a U.S. State Department’s deputy spokesperson, lashed out at the Chinese Communist Party and their proxies in Hong Kong for eroding press freedoms in the city.

There are also reports that the Hong Kong administration wants to make all civil servants, including journalists from RTHK, take an oath of loyalty to the government. This law will apply to both existing and newly recruited RTHK employees. If implemented, it could make the actions of RTHK journalists who negatively report on the government a crime.

Choy is just one among a number of journalists who have been arrested recently by the Hong Kong police on baseless charges. A 26-year-old female journalist, surnamed “Ho,” has been arrested for refusing to stop filming the arrest of two women at public toilets in May. She was charged with obstructing the police. When she refused to stop recording, the police pepper-sprayed her and took away her camera.

In another incident, a student reporter from the Baptist University has been charged with obstructing police officers and resisting arrest amid a protest held around five months ago. If convicted, the 22-year-old will have to spend six months in prison.