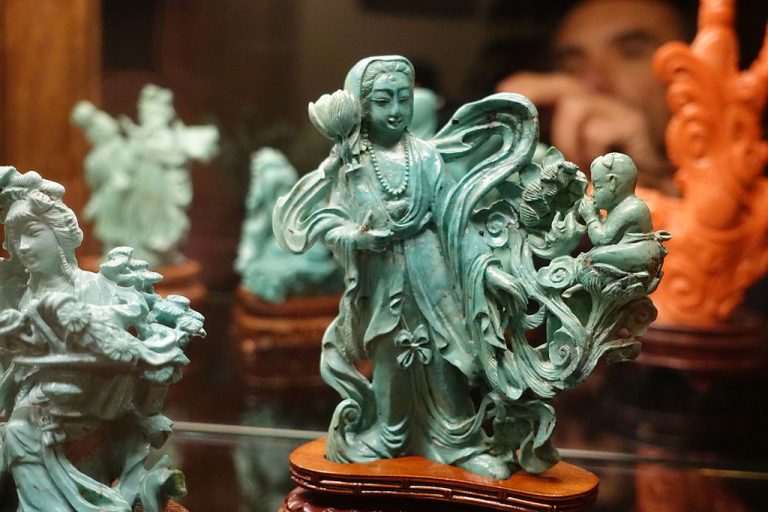 Jade has always been valued in China. (Image: Joseolgon via Wikimedia Commons)

Over the course of thousands of years, China has seen the development of numerous art forms. Some of these ancient Chinese art forms have been lost in time, becoming irrelevant in the modern era, while some continue to attract people’s attention.

Jade objects were coveted in ancient China. It was first mined in China at around 6,000 BCE. The Chinese viewed jade as a symbol of nobility, immortality, and perfection. Jade was considered to be the essence of heaven and earth. Many jade ornaments had a hole in the center, which was done to honor the gods in heaven. In addition to ornaments, jade was also used for sculptures and everyday objects like cups, bowls, vases, and so on. Even today, the Chinese hold a deep reverence for jade.

Shadow puppet shows were popular as far back as during the time of the Han Dynasty (202 BCE to 220 CE). The puppets were usually made of leather. While a band of musicians would play instruments, a puppeteer would manipulate the puppets and narrate captivating stories. Though this Ancient Chinese art form has kind of lost popularity in modern times due to the availability of movies and video games, shadow puppet shows do attract curiosity from time to time. In some regions of Northern China, such shows remain popular.

The word cloisonné comes from the French word “cloison,” which means “partition.” This was a technique that ancient Chinese used to decorate metal objects, specifically utensils made from bronze or copper. Such decorated objects were popular during the Mongol rule in Yunnan Province. Artisans used to glue copper wires on objects and then draw over it. Sadly, most of the earliest cloisonné was fragile by nature due to which only a few of them exist today.

Ancient Chinese people viewed the ancient Chinese art of calligraphy as an art form. Those who demonstrated excellent control over the use of brush and ink were held in high regard. It was during the Han period that calligraphy became established as an art form. In fact, an educated person was expected to have some level of proficiency in calligraphy. Some people held calligraphy to be a superior art form to even sculpting and painting. It was ranked together with poetry as a means to cultivation and self-expression.

During the Northern Song Dynasty period (960 CE and 1127 CE), painting established itself as a key art form. Chinese painters are known for their focus on landscape paintings. Such paintings were regarded as showcasing the beauty of nature while also providing a glimpse of the “inner landscape” of the painter.

The period of Five Dynasties and Northern Song is usually considered the “great age of Chinese landscapes.” In northern China, artists painted scenes depicting large mountains. In the southern regions, paintings of hills and rivers were popular. Famous artists like Ju Ran and Dong Yuan depicted the beauty of their countryside.

The Yanshao people, who lived along the Yellow River between 5000 BCE and 3000 BCE, decorated Neolithic pottery by pressing cords onto them, which left pattern imprints. By the end of the Neolithic period, the Yanshao people began painting human faces and geometric designs on ceramics.