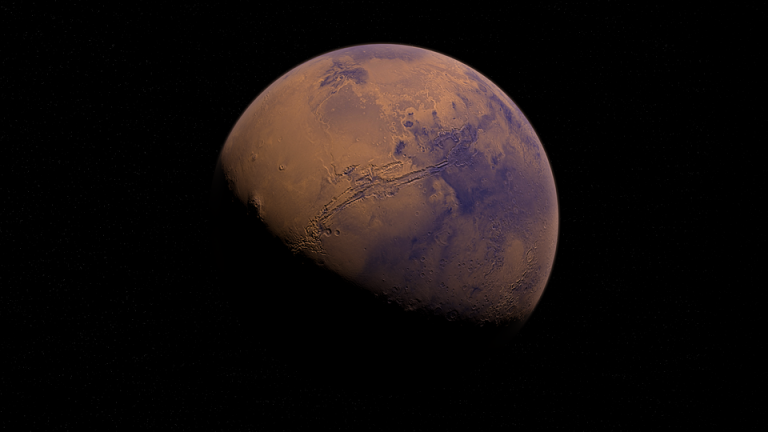 Analysis of an ancient meteorite from Mars suggests that the mineral zircon may be abundant on the surface of the red planet. (Image: AlexAntropov86 via Pixabay)

The uranium-bearing mineral zircon is an abundant constituent of Earth’s continental crust, providing information about the age and origin of the continents and large geological features such as mountain chains and giant volcanoes.

But unlike Earth, the crust of Mars is not evolved and is compositionally similar to the crust found under the Earth’s oceans, where zircon is rare. Therefore, this mineral is not expected to be a common mineral on Mars. Professor Martin Bizzarro from the GLOBE Institute, who led the study, said:

“We were quite surprised and excited when we found so many zircons in this martian meteorite. Zircon are incredible durable crystals that can be dated and preserve information that tell us about their origins. Having access to so many zircons is like opening a time window into the geologic history of planet.”

The team investigated the ancient Martian meteorite NWA 7533, dubbed “Black Beauty,” which was discovered in the desert of Morocco in 2011. After crushing 15 grams of this rock, they extracted about 60 zircons. By age-dating the zircons, they found that the majority of crystals date back to about 4.5 billion years ago, namely the very beginning of the planet’s life.

But they also made an unexpected discovery: Some of the zircons defined much younger ages, ranging from about 1,500 million years down to 300 million years. Bizzarro said:

“These young ages were a great surprise. The Black Beauty meteorite is believed to come from the southern hemisphere of Mars, which does not have any young volcanic terrains.

“The only possible source for these young zircons is the Tharsis volcanic province located in the northern hemisphere of the planet, which contains large volcanoes that were recently active.”

The Tharsis bulge on Mars is an enormous volcanic province that hosts the largest volcanoes in the Solar System, which are up to 21 km high. Scientists believe that this volcanic province is the expression of very deep magmatism that erupts on the planet’s surface. The analogy on Earth is the Hawaiian volcanic chain of islands, which is also believed to reflect the deep-seated volcanic activity. But because of plate tectonics, the Pacific Plate is constantly moving such that, instead of accumulating at one single location, a chain of progressively younger volcanic islands has formed.

Zircon might give information about the inaccessible interior of Mars

Since Mars does not have plate tectonics, the volcanoes pile up at one single location and as a result, grow to gigantic sizes. If Bizzarro’s team is correct, it means that the young zircons may contain information about the deep, inaccessible interior of Mars. This is the first time that scientists have had direct access to the deep interior of the red planet via these samples, which may allow them to uncover the internal structure and composition of Mars. Mafalda Costa, the first author of the new study, explained:

“Having samples of the deep interior of Mars is key. This means that we can now use these zircons to probe the origin of the volatile elements on Mars, including its water, and see how it compares with Earth and other planets in the Solar System.”

But to understand the nature of the deep Martian interior, the researchers turned to the analysis of the isotopic composition of the element hafnium in the same zircons. Martin Bizzarro added:

“Because hafnium is a major elemental constituent of zircon, it retains a memory of where the zircon formed. We found that the hafnium isotope composition of the young zircons is unlike any of the known Martian meteorites, which indicates that the young zircons come from a primitive reservoir that we did not know existed in the interior of Mars.”

The hafnium isotope composition of the young zircons is similar to the most primitive objects in the Solar System, that is, chondrite meteorites. These chondrite meteorites are samples of asteroids that have never been modified since their formation. This implies that the deep interior of Mars has essentially not been modified since the formation of the planet. The existence of such a primitive reservoir is expected for a planet lacking plate tectonics.

In contrast to Earth, where material formed at the surface is continuously recycled into the interior by plate tectonics, the deep interior of Mars has remained unchanged since the birth of the planet and, as such, preserves its initial composition.

Finally, the discovery that zircon may be abundant on the Martian surface may guide the future robotic exploration of the planet, especially in the framework of returning samples to Earth. Martin Bizzarro concluded, saying:

“Our study makes clear that a return mission targeted at acquiring zircon-bearing samples will be of high scientific value towards understanding the geologic history of Mars.”