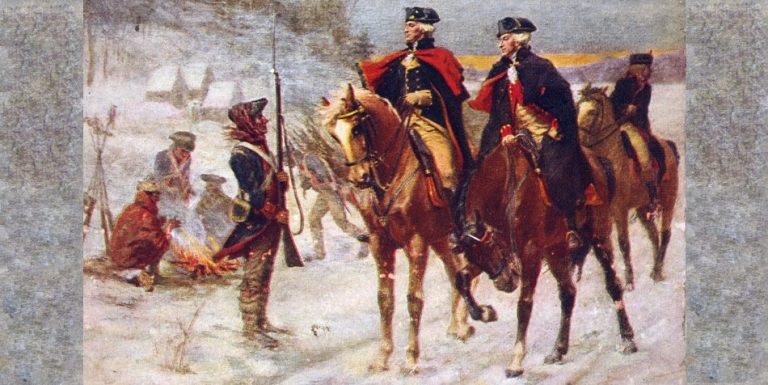 The winter in the Valley Forge woods was the darkest hour during the War of Independence fought between the British and the original 13 British colonies in America. The most significant battle of the war, however, was fought not against the British on the battlefield, but against the cruel winter of 1777-78 itself.

General George Washington and his 12,000 patriotic men endured every conceivable setback and test: bitter cold, starvation, pestilence, disease, poor shelter, shortages of all the basics of survival — shoes, clothing, food, and shelter. Given the situation, Washington shouldered all the setbacks of a leader and trials of the human heart. To break out, to win this battle, to inspire his men, he was on his own. During that cruel winter, God forged a new kind of nation.

“I said before that the most sublime picture in American history is of George Washington on his knees in the snow at Valley Forge. That image personifies a people who know that it’s not enough to depend on our own courage and goodness. We must also seek help from God our father and preserver.” — President Ronald Reagan, 1982

In the winter of ’77, Washington led his troops to camp at Valley Forge, northwest of Philadelphia. This was a naturally defensible plateau, bounded on the east by a river with small creeks that would impede an attack from cavalry or artillery. This was to allow the soldiers to recuperate and survive the long winter. Later, history books and biographies recorded that this was one of the most terrible winters and that soldiers in the Continental army had the worst life.

From the beginning of the war until the end of the fighting, Washington and his army encountered extreme conditions: lack of food, lack of proper clothing and proper shelter, and extreme cold. They did not have enough food, blankets, or even footwear, forcing them to walk barefoot during the winter frost.

The cutting wind and cold rain, the icy skies and snow were the toughest battles for the young army to overcome. Even though there was plenty of wood available so that the soldiers could cut it up to build huts for shelter and burn it for heating in order to keep warm, they were still dying of hunger and disease as they sat around the fire in the wooden huts with heavy snow outside.

How could they be hungry and famished in the fertile land of North America? This was because the Continental Congress at that time did not have any centralized executive power. Neither could they levy taxes on the people. The 13 states took care of the provision of supply for the army and each would support the army from their own state. In this case, Congress was not able to finance the revolutionary war and at the same time, tens of thousands of British troops were stationed in America’s East.

This made Britain’s King George III more adamant and entrenched: Even if their (referring to the colonies) blood would flow like a river, the King would neither relent nor give in to the calls for reconciliation and independence. Under these circumstances, the people in the American colonies were divided into loyalists who maintained a sense of allegiance to the British Crown and patriots who supported the revolution. The loyalists neither approved of nor offered assistance to the Continental army. In addition, the British newspapers printed in the colonies at that time often announced that Washington was about to be captured alive or that he had already been captured.

Things go from bad to worse at Valley Forge

When the British troops occupied Philadelphia, delegates of the Continental Congress fled. Ordinary citizens were caught in the middle and dared not take sides. What if Washington’s troops lost the war? What would the British monarch do to them after the army’s defeat?

At that time, the army’s food supply from the states was running short and neither could the states resupply them. Therefore military supplies were in serious shortage and the situation was worsened by the icy and snowy weather. The soldiers could scarcely have three meals a day.

Washington himself had to skip meals and stayed hungry. Washington’s officers wanted him to return to his farm in the South for the winter as it would be more comfortable than the extreme situation in Valley Forge. Of course, the General shook his head and refused to abandon his fellow soldiers when they were in such a pathetic state. Throughout the war, Washington had never left his army, not even for a single day!

The areas around Valley Forge were rich in fertile land, dense forests, and deep rivers. The land was so fertile that you could harvest whatever you planted. There were several farms and mills around the valley. The farmers there lived comfortably during the winter. There was wood for burning for the stoves and freshly baked bread on the plate.

Yet the farmers refused to sell their grain to the Continental army and instead sold it to the British army. The farmers did not trust the banknotes issued by the Continental Congress. It was exactly for this reason that the farmers isolated the soldiers who were suffering from hunger and extreme cold.