This Canadian YouTuber Made the Best Lightsaber 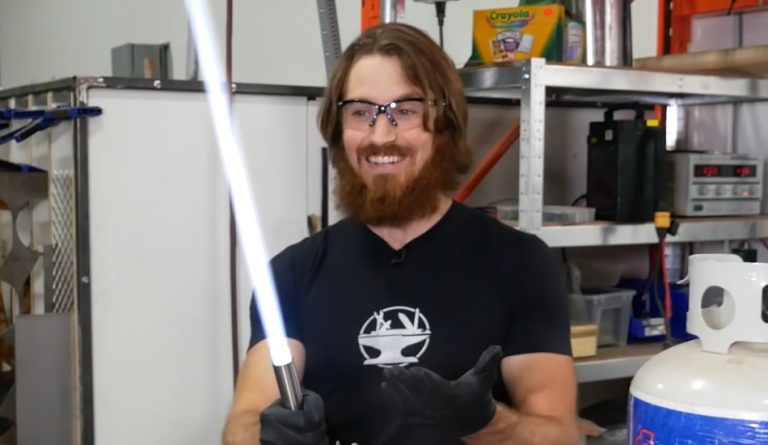 A YouTuber has made a retractable lightsaber. (Image: Screenshot via YouTube)

Of all fictional sci-fi weapons, the lightsaber from Star Wars is probably the most iconic. Many people, whether they are fans of the Star Wars movies or not, have fantasized about holding a lightsaber in their hands at some point in time. A Canadian YouTuber, James Hobson, has made this fantasy a reality as he has created a lightsaber that can burn at up to 4000°C and even cut through a sheet of steel.

Hobson is an engineer by profession and is also popularly known as “The Hacksmith.” His YouTube Channel “Hacksmith Industries” has close to 11 million subscribers and focuses on making prototypes of fictional ideas from movies, comics, and video games. Though he has made lightsabers previously, this is the first time that Hobson has succeeded in making a retractable, plasma-based lightsaber. One of the main challenges Hobson and his team faced was to produce strong enough electromagnetic fields that could contain the plasma blade.

The team ended up using liquid petroleum gas (LPG) for the lightsaber. The LPG is mixed in with oxygen to make a plasma beam through a physical phenomenon called laminar flow in which liquids are allowed to flow smoothly. The lightsaber’s nozzle was purchased from an outside source. However, the casing and design were both done in-house.

Hobson points out that lightsabers without backpacks are currently not realistic since they would require D-size batteries to put forth power greater than those of a nuclear power plant. As such, Star Wars fans will now have to be content with Hobson’s lightsaber, which is the closest anyone has ever come to realizing the movie version.

As an added bonus, Hobson’s lightsaber can even change colors. By adding strontium chloride, the beam becomes red. Similarly, boric acid gives a green color and sodium chloride turns the plasma blue. The lightsaber costs about US$4000. In addition to the lightsaber, Hobson has also created Captain America’s shield, Wolverine’s claws, and the thermal imaging helmet from the Predator series of films.

While the lightsaber is the most popular weapon in movies, there are numerous other weapons from films that have captured the attention of film fanatics. Here are three such weapons.

In the Star Trek franchise, a phaser gun fires off pulsed energy projectiles. The gun has numerous firing modes, including burn, kill, stun, and vaporize. Though it is called a gun, they actually come in various sizes, including some versions big enough to be hosted on a spaceship.

In the 2002 Steven Spielberg movie Minority Report, police officers use sonic guns as their weapons. The gun basically shoots a sonic pulse toward a target, the force of which sends the target flying back some distance. Though the sonic pulse itself will not harm the target, the person can end up severely injured if they hit walls or other objects.

This one is from the 2009 movie District 9. The gun is used by the alien species in the movie. When a target is hit, it explodes quite messily. The gun has a DNA restriction due to which only aliens can use it. Maybe in the future, we will have weapons with similar DNA restrictions where only a specific individual, lineage, or group will be able to wield them.