How a Little Monkey Saved a Village 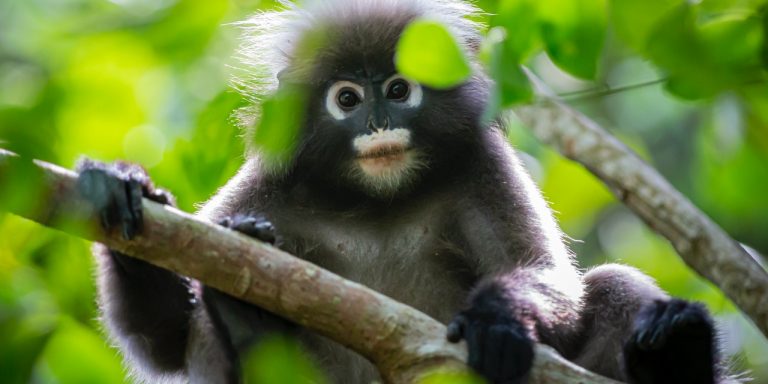 A little leaf monkey saves a village after a villager saved the monkey. (Image: via Pexels)

This is the true story of a villager who lived near Mount Jinfo in Chongqing, China, and how he saved a monkey only to have it return the favor by saving him along with his entire village.

In July 2000, a villager named Zhicheng Wang, who lived at the foot of the mountain, was picking herbs in the woods. Suddenly, he heard a loud “bang” and saw a black ball falling from a tree. The sound shocked him greatly and he was just starting to run away when he felt a tug on his leg. Looking down, he saw a young leaf monkey staring up at him with a pitiful expression. It was whining and its left paw was bleeding. It seemed to be asking Wang for help!

Without a second thought, Wang hurriedly carried the monkey back home. He cleaned its wound and put a salve on it that he made with herbs he had collected. It did not resist at all. After he was done, Wang tied a makeshift leash around its neck so it could move about in the house while it rehabilitated.

A week later, the wound was fully healed. Wang untied the string and let it go back to the woods. Unexpectedly, it did not want to leave. He stayed at Wang’s house and even helped him.

In the morning, it would go out to Wang’s field. Whenever a wild boar, a woolly monkey, or a hedgehog came to eat the crops, it would roar and show its teeth to scare the unwelcome guest away. If that didn’t work, it would fiercely shake tree branches to intimidate the other animals. Normally, this would work except when dealing with the woolly monkeys. In those cases, it would rush out to the woolly monkey and forcefully whip the invader’s back with its long tail until it left.

The monkey stayed at Wang’s house for more than a month and then disappeared one morning.

In the very early hours of a September day, while Wang and all the other villagers were still sound asleep, a loud banging on the door and desperate yelling noises woke Wang up. When he opened the door, he saw the leaf monkey. He stepped forward to hug it, but it struggled to get out of his hold and made a terrifying shrieking noise. Wang did not understand. It then pointed to the mountain ridge. Wang turned and looked. A landslide had started and huge boulders were rolling down the side of the mountain. The monkey grasped Wang and pulled him to leave the house.

Wang finally got the message. He ran back to the house to wake up his wife, picked up his child, and ran out of the house. Then one by one he banged on all the neighbors’ doors in the village. Just as all the villagers managed to flee, the boulders reached the village and smashed everything in their path.

Many villagers cried. They were so near death. If not for the monkey, they all would have died. They searched for the monkey and saw it standing on a tree branch looking at them. It made some happy-sounding noises and then, without warning, it disappeared into the woods again.

Wang helped the monkey unconditionally with no selfish thoughts, simply doing whatever he could to provide aid. Wang was able to help the little monkey, which then helped him in return. Animals help humans when the conditions are right.

Translated by Cecilia, Edited by Helen