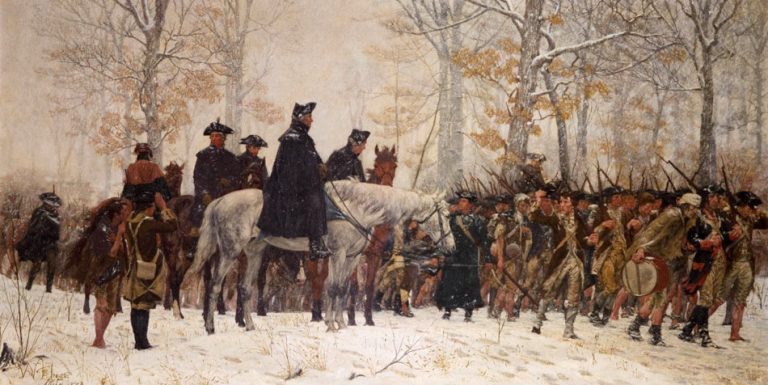 Winter in the Valley Forge woods was the lowest point during the American Revolutionary War. (Image: wikimedia / CC0 1.0)

In the face of the terrible suffering of his barefoot troops, General Washington would often leave camp alone, riding his white horse into the dense forest at Valley Forge. With the winter snow bitingly cold and the wind pelting snowflakes against his face, he would stop at a solitary place to pray. Washington would kneel down on one knee in the snow, clasp his hands together, and humbly ask God for mercy and blessings.

In the surrounding villages of the valley, there was a miller who was among those who refused to sell grain to American farmers and claimed to be loyal to the British monarch. One day, as he was passing through the forest, he heard a voice in the snow-covered woods grieving and sobbing. He walked quietly toward the sound and saw Washington alone, kneeling on one knee with his head bowed and hands clasped in front of his chest, praying to God.

The miller heard Washington confiding in God about the plight of his starving troops. He saw that Washington was all alone, without entourage or guards around him, with only his white horse standing behind him. The general and his horse were covered with snow, but this did not deter them from staying put. Washington in his upright posture continued to pray, not aware of the surroundings or the passage of time. He did not even realize that someone was moving around in the woods nearby.

The miller, who claimed to be a loyalist, was deeply touched. When he returned home, he told his wife about Washington praying alone in the forest. As he spoke, he was so moved that he broke into tears. The miller later repetitiously narrated his shocking discovery to the people in his village.

Others came forward and claimed that they had also witnessed Washington kneeling in the snow, praying to God. From then on, the farmers and millers changed their hearts and started to send grain to the Continental army. They felt apologetic for isolating Washington and his troops earlier on and now held them in respect.

The millers even ground the grain into flour in their granaries and sent it to the Continental army’s camp. The atmosphere changed. Warm smoke could be seen rising in the air over the camp. When the troops left the woods to continue the war against the British army, many of the local farmers joined the Continental army.

Winter in the Valley Forge woods was the lowest point during the War of Independence. Washington however, held onto his determination, and with faith in God, rose to the occasion. In June of 1778, General Washington and his men left Valley Forge as a lean, disciplined, and well-trained fighting machine. During that cruel winter, God forged a new kind of nation and a new dispensation for the world.