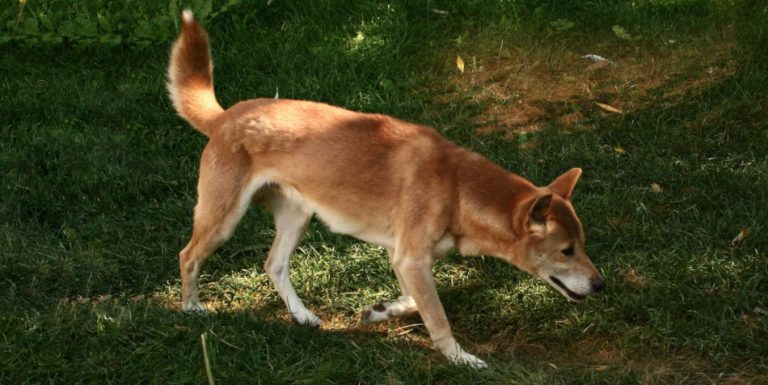 Until recently, the New Guinea singing dog was thought to have been extinct in the wild. (Image: cyclewidow via Flickr)

The New Guinea singing dog is an animal that was thought to have been extinct in the wild for around 50 years. The 200 singing dogs that exist in zoos and conservation areas are descendants of the canines that were captured in the 1970s. However, a recent study has found that these dogs are alive and well in the wild after all.

As the name suggests, the New Guinea singing dog is capable of making harmonic sounds that some equate to sounds made by humpback whales. In 2016, an expedition came across 15 wild dogs in the remote regions of the western half of the island. In 2018, another expedition collected biological samples of the dogs. DNA analysis showed that the wild dogs shared 70 percent similarity with the captive singing dogs. The scientists concluded that these wild dogs are the New Guinea singing dogs thought to have been extinct outside of captivity. The genetic differences between the wild dogs and the captive dogs were attributed to the fact that the captive ones have been inbreeding for several decades.

Ostrander notes that the New Guinea singing dogs have a beautiful harmonic vocalization that makes them very unique. As such, she does not want the species to go extinct. The researchers hope that they will be able to breed the wild dogs with captive ones and create a new population of singing dogs. They were also found to be closely related to Australian dingos. Both breeds of dogs are believed to have split off pretty early, with the wild singing dogs being the oldest. By learning more about these dogs, scientists hope to gain a deeper understanding of dog breeds and domestication. Ultimately, this will also shed light on the history of the human race since the domestication of dogs is tied with the rise of humanity.

New Guinea singing dogs have vocalizations that are similar to the dingo, wolf, and so on. However, their howl is very unique, mostly sounding like a yodel in which the tones go up and down. In a group, when one dog starts singing, the other ones also join in with different pitches, thus producing a music-like quality to the sounds.

These dogs are believed to hunt alone. They defend a territory in mated pairs, with both the male and female involved in raising the puppies. Females can give birth to around 4 pups on average in a litter. The puppies spend most of their time playing, reinforcing the social bonds that will come in handy when they go out for hunting expeditions during adulthood.

The joints and spine of the New Guinea singing dogs are extremely flexible to the extent that they can jump and climb like a cat. These dogs usually weigh around 17.5 to 30 pounds and have a life expectancy of up to 20 years.