Explore Lithuania: The City of Vilnius 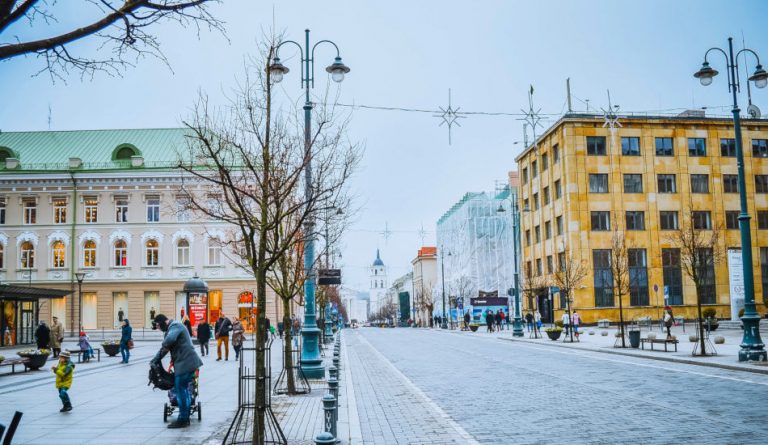 Vilnius is the capital city of Lithuania and has a population in excess of 587,500. (Image: Sami C via Flickr)

Vilnius is the capital city of Lithuania. It is also the largest city in the country and has a population in excess of 587,500. The name comes from the Vilnia River. The strong Jewish influence in the city earned it the nickname “Jerusalem of Lithuania.” The Globalization and World Cities Research Network (GaWC) has classified the city as a Gamma global city, indicating that it is a primary node in the global economic network.

According to local legends, Vilnius was established by a Duke named Gediminas in the early 14th century after he had a dream about an iron wolf howling atop a hill. The city’s name first appeared in writing in 1323 and it soon became the capital of Lithuania, the largest European nation at that time. The city boasted a tolerant culture where Lutheran German merchants, Jewish craftsmen, Pagan commoners, and Muslim Tartars lived together peacefully.

As the city became rich, several palaces, monasteries, and churches were set up. In 1579, Vilnius University was established, which became Eastern Europe’s main center of science and education. In the mid-17th century, the Lithuanian-Polish commonwealth lost several wars to foreign invaders. This ended the era of prosperity in the region and the Russian Empire came to control Vilnius in 1795.

Over the next 120 years, Vilnius was treated as a backwater of the Russian Empire. The city eventually passed through various powers like Napoleon’s France, Nazi Germany, and the Soviet Union. In 1990, Lithuania gained independence.

The Vilnius city center is divided into five major regions. The Old Town is one of the largest surviving medieval era old towns in Europe. You will find buildings with various European styles like Gothic, Baroque, and Renaissance standing side by side. The Republic Of Užupis is situated near a tiny river and is mostly an artistic district. Šnipiškės is the main business district where numerous startups and banks are located. In 2019, Financial Times listed the city as having the highest tech startup FDI attraction index.

Žvėrynas is noted for its green cover, which is no surprise since the region used to be a huge forest where noblemen hunted in ancient times. The New Town is under a redevelopment campaign. Vilnius is an ethnically diverse city. Around 65 percent of the population is ethnic Lithuanian, 14 percent Polish, 12 percent Russian, and the remaining 9 percent comes from 128 other ethnicities.

Much of the castle has been lost, but the Upper Castle tower remains intact and is a major tourist attraction. Built in the 1400s, the structure has been classified as a UNESCO World Heritage Site. Once you reach the top, you will have a stunning view of the Old Town and the surrounding areas.

Vilnius is one of the rarest cities in Europe due to the fact that it allows hot air ballooning in its skies. You can choose from a morning or evening flight schedule. A single trip usually lasts for about 45 to 60 minutes.

As the name suggests, the spot has three massive crosses located on top of the hill and is seen as the symbol of Lithuania’s rebirth. Originally, there were three wooden crosses erected in the 17th century to commemorate the Franciscan friars who were martyred there. The Soviets removed them. The current crosses were erected in 1989 after the Soviet Union collapsed. The place offers an excellent 360-degree view of the city.