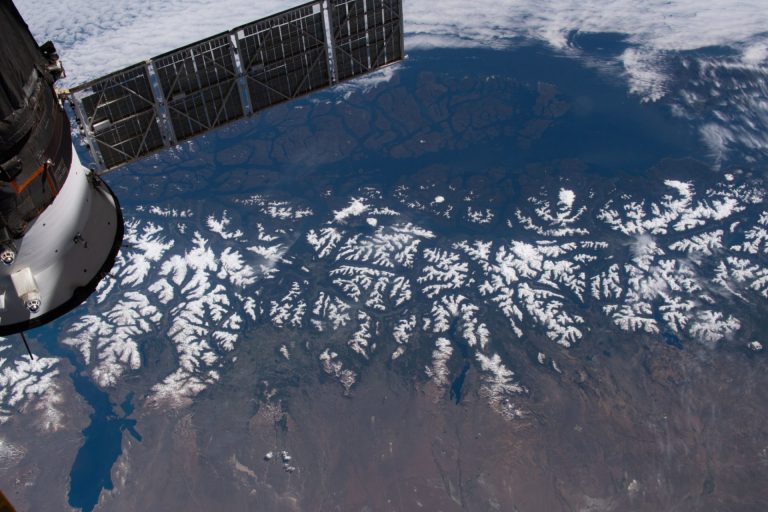 The snow-capped peaks of the Andes Mountains in southern Chile are pictured from the International Space Station as it orbited above South America in November 2020. (Image: via NASA)

The historic NASA Twins Study investigated identical twin astronauts Scott and Mark Kelly and provided new information on the health effects of spending time in space. Colorado State University Professor Susan Bailey was one of more than 80 scientists across 12 universities who conducted research on the textbook experiment; Mark remained on Earth while Scott orbited high above for nearly one year.

The massive effort was coordinated by NASA’s Human Research Program. Bailey has continued her NASA research and now joins more than 200 investigators from dozens of academic, government, aerospace, and industry groups to publish a package of 30 scientific papers in five Cell Press journals.

Jared Luxton, who recently received his doctoral degree in cell and molecular biology at CSU, is the first author of two of the studies. He is now a data scientist with the United States Department of Agriculture in Fort Collins. The research — including an over-arching paper that covers what the investigators have learned about the fundamental features of space flight — represents the largest set of space biology and astronaut health effects data ever produced.

For Bailey, it is also a milestone marking many years of working with NASA, which included her lead role on basic radiation studies and the honor of being selected as an investigator for the Twins Study and concurrent research projects involving astronauts. During this time, several graduate students in her lab earned doctoral degrees under her mentorship. Bailey said:

“We now have a foundation to build on — things we know to look for in future astronauts, including telomere length changes and DNA damage responses. Going forward, our goal is to get a better idea of underlying mechanisms, of what’s going on during long-duration space flight in the human body and how it varies between people. Not everybody responds the same way. That was one of the good things about having the larger cohort of astronauts in these studies.”

Studying the ends of chromosomes with implications for aging

Bailey is an expert on telomeres and radiation-induced DNA damage, areas of research on health effects that were of keen interest around the world when the Twins Study was published. In that study, she and her team found that Scott’s telomeres in his white blood cells got longer while in space, and subsequently returned to near normal length after he was back on Earth.

Telomeres are protective “caps” on the ends of chromosomes that shorten as a person ages. Large changes in telomere length could mean a person is at risk for accelerated aging or the diseases that come along with getting older, such as cardiovascular disease and cancer, for example.

In the latest research, Bailey, Luxton, Senior Research Associate Lynn Taylor, and the team studied a group of 10 unrelated astronauts, including CSU alum Dr. Kjell Lindgren, comparing the results with findings from the Kelly twins.

The investigations involved astronauts who spent approximately six months on the International Space Station in low-Earth orbit, which is protected from some space radiation. Despite the protection, scientists found evidence of DNA damage that could be warning signs of potential health effects.

Among the new findings, the research team found that chronic oxidative stress during spaceflight contributed to the telomere elongation they observed. They also found that astronauts in general had shorter telomeres after spaceflight than they did before. The team also observed individual differences in responses.

To gain more insight into these findings, Bailey’s team also studied twin mountain climbers who scaled Mt. Everest, an extreme environment on Earth. The non-climbing twins remained at a lower altitude, including in Boulder, Colorado. Remarkably, the team found similar evidence of oxidative stress and changes in telomere length in the climbers.

“Normal blood cells are dying and trying to survive. They’re adapting to their new environment. Some cells will activate an alternative pathway to keep their telomeres going. It’s similar to what happens with some tumors. Some of the cells emerge from that process. That’s what we think we’re seeing during spaceflight as well.”

Luxton said the mechanism described above — known as alternative lengthening of telomeres, or ALT — was an unexpected finding. “You usually see that in cancer or in developing embryos,” he said.

Take care of your telomeres

Similar to conclusions from the Twins Study, Bailey said the new findings have implications for the health effects for future space travelers establishing a base on the Moon or traveling to Mars, or even for space tourists. Long-duration exploration missions will involve increased time and distance outside of the protection of the Earth.

Although longer telomeres in space might seem like a good thing, perhaps even a “fountain of youth,” the scientist said she suspects a somewhat different ending to the story:

“Extended lifespan, or immortality, of cells that have suffered space radiation-induced DNA damage, such as chromosomal inversions, is a recipe for increased cancer risk.”

Bailey said she and the team observed increased frequencies of inversions in all crewmembers, during and after spaceflight:

“Telomeres really are reflective of our lifestyles – whether on or off the planet,” said Bailey. “Our choices do make a difference in how quickly or how well we are aging. It’s important to take care of your telomeres.”

Provided by: Mary Guiden, Colorado State University [Note: Materials may be edited for content and length.]