William Stanton, a Retired American Diplomat Who Is in Love With Taiwan 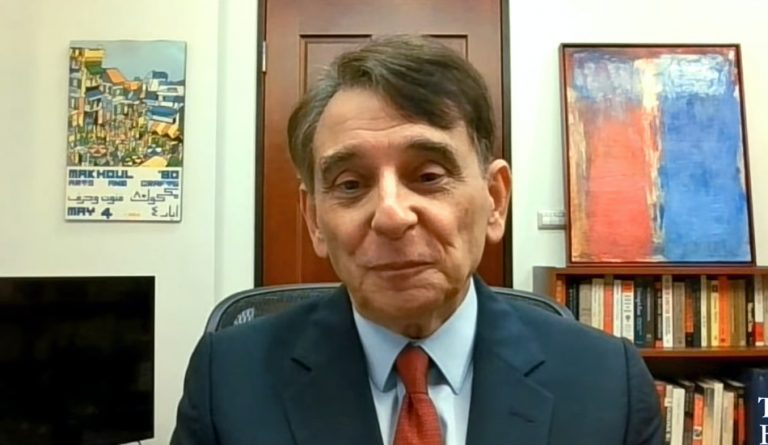 William Stanton, former director of the American Institute in Taiwan and current Vice President of National Yang Ming University, remained in Taiwan to teach after his retirement. (Image: Screenshot via YouTube)

William Stanton, former director of the American Institute in Taiwan (AIT) and current Vice President of the National Yang-Ming University, remained in Taiwan to teach after his retirement. He hopes to dedicate the experience and expertise he has accumulated all his life to students in Taiwan. He loves living in Taiwan and has no plans to leave.

According to the Voice of America, William Stanton said: “Whether I’m at the school or not, I’m always making preparations for my next class. I teach on Thursdays, so I usually stay at the school on Tuesday, Wednesday, and Thursday.” It is the seventh year since he retired from his career as a diplomat and his first year at Yang-Ming University as Vice President.

The slope on campus is a challenge to William Stanton, who is 73 years old. “I feel that I should be paid more for climbing all the steps,” William Stanton said humorously and breathlessly to his secretary.

“The title of my course is ‘The Big Picture: How Geography, Trade, and Politics Shape Our Troubled World.’ As a course on international relationships using the thematic teaching method, it makes comments on major countries and hot regions in the world, so I have to read extensively in preparation.”

This is a general course taught in English. Hao Jan-ai, a sophomore in the Medical Department, is one of William Stanton’s students. “The first reason for my taking this course is that it motivates me to understand problems of different areas in the world. The second reason is that it forces me to express myself in English. We seldom have the chance to do it in other classes,” said Hao.

William Stanton stayed in Taiwan to teach after he retired from AIT in 2012. He has taught in the Taipei American School, serving as founding Director of the Center for Asia Policy. He has also served as Senior Vice President for Global Affairs of Tsing Hua University and taught at National Taiwan University.

“As I get older, it’s even more important that there’s meaning in what I do. I  can offer my point of view on how the world and USA look at Taiwan, and benefit the students in Taiwan with my 34 years of diplomatic experience and my views as an employee who worked for the U.S. government,” said William Stanton.

According to Chen Jen-hao, one of his students, William Stanton’s point of view is valuable. “He will cite news reports and academic references to support his opinions. By just reading materials we sometimes cannot come to a favorable conclusion, but his comments as an American diplomat can frequently provide a real-time and global viewpoint.”

Liu Cheng-xuan, also a sophomore in the Medical Department, said: “He has accumulated varied experiences; for example, he was stationed in Lebanon, Australia, and Beijing, with Taiwan as his final destination. He has traveled to so many places and gone through so many experiences; his horizon is higher and wider than that of ours. In addition, what concerns him is the advantages of higher levels and wider spectra, such as how to get the best advantages for the United States, because he used to be a diplomat. He is not an everyday person: his viewpoints are different from ours.”

Visiting William Stanton’s home in Taipei, one may see that his diplomatic career is reflected in his art collection. For example, the watercolor painting A Swirling Dancing Monk is from Beirut, bought when he was stationed in the American Embassy in Lebanon. The eye-catching abstract painting A Forest Fire was bought when he served as the vice director of the American Embassy in Australia. The watercolor painting in the dining room by Tseng Lee-yuen, a Taiwanese painter who stayed in the United States, was bought when he served as the director of AIT in Taiwan.

Reflecting on his life in Taiwan, William Stanton said: “Obviously I like to live here, otherwise I wouldn’t have stayed. Taiwanese people frequently ask why I stay in Taiwan and my answer has been ‘Why not?’ I think it is because Taiwanese people are modest and there is a lack of knowledge of the extraordinary achievements of Taiwan, so not enough of them are proud of their country.”

In his eyes, Taiwan is a modern-day miracle. In early 2019 he wrote an article Learning to Appreciate a Modern Miracle — Taiwan for Taiwan News, a local English newspaper. It points out that Taiwan achieved the transition from a military dictatorship to a democracy in only 10 years, an amazingly short period. It turned from a poor country into a flourishing one with leading achievements in many scientific and technological fields.

Free national health insurance is highly valued, which is also one of the reasons he wants to stay. Taiwan ranked in the top four for the past three years in the online “InterNations Expat Insider” survey of “Best Countries for Expats.” In 2018, Taipei also ranked first in the quality of urban living, and scored in the top five for all indices in InterNations expat city ranking. “But to put it simply, you must be here in person to experience what it’s like to live here. All the foreigners I know who live here like it and enjoy living here,” said William Stanton.

In his house, there is a life-size cardboard cut-out of William Stanton, a present for his retirement from his ex-colleagues at AIT. During his term at AIT, he achieved several important goals, such as arms sales to Taiwan worth US$13 billion, importation of American beef to Taiwan, and getting Taiwan added to the Visa Waiver Program by the U.S. government.

“During my service as the director of AIT, the job that I am most proud of was including Taiwan in the Visa Waiver Program. We did all the hard work. They announced the approval in October, two months after my retirement in August,” said William Stanton.

William Stanton and his wife, also a diplomat who once served as the American ambassador in East Timor, have two daughters. The elder daughter was born in Taiwan and lives in Australia. The younger daughter lives in California. William Stanton lives alone in Taiwan. He is busy with teaching, writing, giving speeches, and reading. “I have no plan to leave Taiwan in the near future. I have stayed here for 10 years, and I will continue to stay here,” said William Stanton.

Translated by Audrey and edited by Helen