A Magnificent Image and Character Formation by 5,400 Falun Gong Adherents in Taiwan 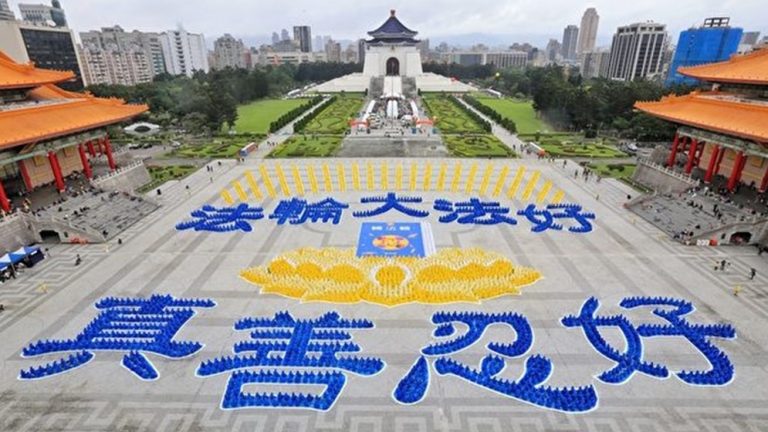 Regardless of the wet weather with chilly winds, over 5,400 Falun Gong adherents assembled at the iconic Liberty Square of the National Chiang Kai-shek Memorial Hall in Taipei City on Dec. 5, 2020. They were there to participate in an annual large-scale image and character formation activity organized by Taiwan’s Falun Dafa Association.

Please watch the following video of the magnificent image and character formation in Taiwan.

Donning yellow, blue, or white clothing as well as caps, they walked into the designated location in an orderly fashion and subsequently sat on the plastic mats pre-arranged on the ground of the square to form the magnificent image and character formation about 90 meters (295 ft) in length and 115 meters in height (380 ft).

Falun Dafa, also known as Falun Gong, is a spiritual discipline that is practiced by around 100 million in over 100 countries around the world. Based on the universal principles of Truthfulness, Compassion, and Tolerance, Falun Gong is rooted in Buddhist tradition and consists of two main components: self-improvement through studying the teachings, and gentle exercises and meditation.

This intriguing image was made up of  the images of the Book of Zhuan Falun  (the main book of Falun Gong), a lotus flower, and the nine Chinese characters of “Falun Dafa Hao” and “Zhen Shan Ren Hao,” which mean “Falun Dafa is good” and “Truthfulness, Compassion, and Tolerance are good.”

Additionally, on top of the image, there were 24 rays of light formed by 1,800 Falun Gong followers wearing yellow costumes, signifying that the Buddha light illuminates the entire world and that the magnificence of the universal principles of Truthfulness, Compassion, and Tolerance are ubiquitous.

This kind of image and character formation activity originated in China to promote Falun Gong before the Chinese Communist regime started to persecute the spiritual discipline in July 1999.

Similar activities have also been held in many other countries such as Taiwan, the United States, and other countries in Asia and Europe since then. However, the images formed in Taiwan are rather elaborate as it has a higher density of Falun Gong adherents.

Taiwan’s Falun Dafa Association has organized this large-scale activity every year since 2000 to promote the magnificence of Falun Gong and raise awareness of the atrocious persecution of Falun Gong practitioners in China.

The blueprint for the image this year was created by a senior Falun Gong practitioner in northern Taiwan who is a retired architect. In fact, he has helped many other countries to come up with the design of similar images over the years.

According to Huang Chun-mei, the organizer of the event and vice president of the Taiwan Dafa Association, it is especially meaningful to come up with the design this year because Falun Gong is of help to the world’s people during the hard times caused by the COVID-19 pandemic.

Right after the image and character formation, over 5,000 Falun Dafa practitioners demonstrated the five sets of Falun Gong exercises at Liberty Square. It is magnificent to see the five sets of peaceful, gentle, and slow-moving exercises being practiced along with beautiful and soothing music at the Liberty Square in front of the eye-catching Chiang Kai-shek Memorial Hall.

The event was wrapped up with the performance by the Falun Dafa Tian Guo Marching Band, which is composed of about 200 Falun Gong practitioners from all walks of life in Taiwan. They performed about 10 uplifting songs including Falun Dafa Is Good, The Stars and Stripes Forever, Joy to the World, etc.