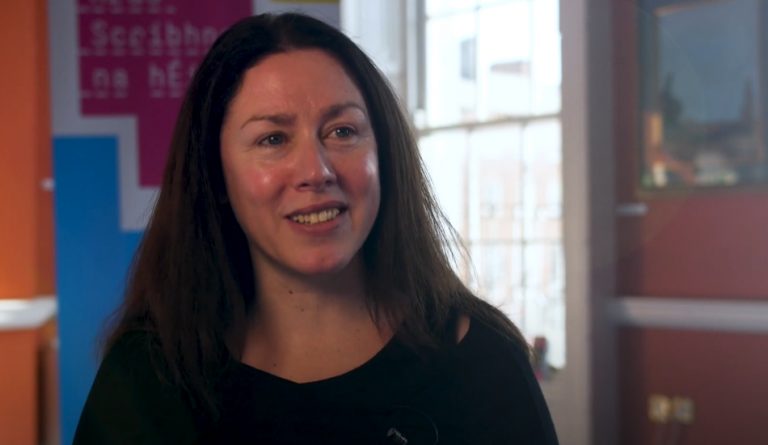 Caitriona Lally is the winner of the Rooney Prize for Irish Literature. (Image: Screenshot via YouTube)

Caitriona Lally won the prestigious Rooney Prize for Irish Literature, one of Ireland’s most prestigious literary honors. It is awarded annually by Trinity College Dublin to a writer under 40 who shows great talent and “exceptional promise.” The announcement came while she was working as a janitor in the same college.

Caitriona Lally, 39, has been awarded for her fictional work Eggshells. It is a whimsical, touching debut about loneliness, friendship, and hope, according to the publisher. The prize committee praised her book as “a work of impressive imaginative reach, witty, subtle, and occasionally endearingly unpredictable.” The book was shortlisted earlier for the Newcomer Award at the 2015 Irish Book Awards and the Kate O’Brien Award.

Caitriona Lally has led an inspiring life. She graduated from Trinity College in English Literature back in 2004. As a student, she used to work for the university as a cleaner during the pre-spring and summer breaks. After graduating, she taught English in Japan for a year, before returning to Dublin where she dabbled in odd jobs. At one point, she crossed the pond over to New York to work as a home aide for seniors.

Later, back in Dublin, she was hired as a content writer for a website, a job she lost during the financial crisis. For the past three and a half years, Caitriona Lally has worked as a janitor in the college. And now, she is the undisputed winner of the coveted literary prize.

Along with her husband, who works for the Irish government, Caitriona Lally lives in Dublin with their 14-month-old daughter, Alice. She awakens each morning to clean from 6 a.m. to 9:30 a.m., and then heads home to take care of her daughter. The day she got the call informing her that she had won, Alice was being fussy.

“I’d been having a rough day — up early for my cleaning job, tearing home to mind the baby, baby wouldn’t nap and was making her feelings known,” she told Trinity College.

She got the ideas for her award-winning work during her unemployment times in Dublin back in 2011. “There were many, many rejections, but after hundreds of job rejections, I think I’d gotten used to being told no,” she said.

Eggshells was published in 2015 and is about “a socially isolated misfit who walks around Dublin searching for patterns and meaning in graffiti or magical-sounding place names or small doors that could lead to another world,” as Caitriona Lally described it to The Washington Post.

The award goes to Caitriona Lally

The award was created back in 1976 by the Irish-American businessman Dan Rooney, owner of the NFL Pittsburgh Steelers franchise and former U.S. Ambassador to Ireland. The Rooney Prize for Irish Literature is awarded to writers aged under 40 who publish in Irish or English. Peter Rooney, Dan’s nephew and a professor of American literature at Trinity, presently administers The Rooney.

The honor comes with €10,000 worth of prize money (about US$11,500). Caitriona Lally plans to use the prize to pay her bills and provide daycare for her daughter, as well as buy a water tank for her attic. She claimed the honor was “the happiest shock of my life” and described it as “just pure magic.”

“Trinity College Dublin was created by royal charter in 1592, at which point Dublin Corporation provided a suitable site, the former Priory of All Hallows. Its foundation came at a time when many universities were being established across western Europe in the belief that they would give prestige to the state in which they were located and that their graduates, clergy for the most part, would perform a vital service as civil administrators…” an extract from the Trinity College website.