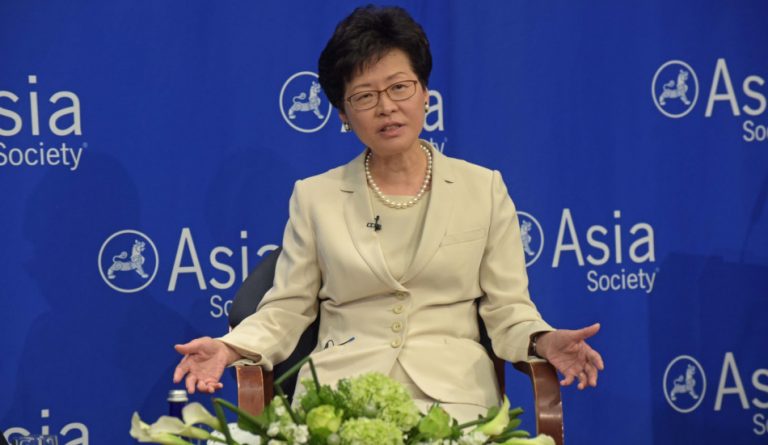 Hong Kong's leader, Carrie Lam, is one of 11 officials blacklisted by the U.S. for their roles in eroding the autonomy of Hong Kong. (Image: Asia Society via Flickr)

In early August, the Trump administration blacklisted 11 officials from China and Hong Kong for their roles in eroding the autonomy of Hong Kong. The sanctions followed Beijing’s move to implement the National Security Law in Hong Kong that basically criminalizes people who work for protecting democracy, freedom of expression, and human rights. One of the sanctioned individuals is Carrie Lam, the Chief Executive of Hong Kong, who recently revealed how the sanctions have affected her.

“I’m using cash every day. I have piles of cash at home — the government is paying me cash for my salary because I don’t have a bank account,” Lam said in an interview with Hong Kong International Business Channel. She also mocked the sanctions imposed by the U.S., calling them an “honor.” In another interview with Chinese state-run CGTN, Lam mentioned that the sanctions had caused “a little bit of inconvenience” since she was unable to use credit cards.

Lam cannot open an account with banks from mainland China since the majority of global financial transactions between banking entities pass through the SWIFT system over which the U.S. dollar has a strong influence. As such, if Chinese banks do not comply with the sanctions imposed by the United States, they will be cut off from the global financial markets.

Lam is one of the highest-paid government leaders in the world. In 2019, USA Today ranked her in second place with annual earnings of US$568,400. Trump followed her in third place with US$400,000 in earnings. The number one spot was secured by Singapore’s Prime Minister Lee Hsien Loong, who had a yearly salary of US$1.6 million. According to a report by the Hong Kong government, Lam made around HK$5.21 million (about US$672,200) for the 2020-2021 period.

In early December, the U.S. announced additional financial sanctions together with travel bans on 14 Chinese officials. The sanctions were placed due to the role they played in Beijing’s disqualification of Hong Kong’s elected opposition legislators in November. The expulsion of four opposition members triggered strong protests from pro-democracy lawmakers, many of whom also resigned en masse.

The new sanctions are seen as President Trump’s efforts to ramp up pressure on China before Joe Biden possibly takes over as the President of the United States. Though Biden has claimed that he would continue putting pressure on Beijing, most experts do not see it happening to the extent that the Trump administration was committed to.

Banking giant HSBC is in the midst of a controversy after it apparently froze the bank accounts of a former pro-democracy lawmaker in Hong Kong. The lawmaker, Ted Hui, recently fled to the UK. In Hong Kong, he was charged with playing a role in the anti-Beijing protests that rocked the city last year. After he escaped the city with his family, Hui found that bank accounts belonging to him, his parents, and his wife were frozen.

However, the accounts were soon made accessible again. In a Facebook post, Hui noted that his family has completely shifted all assets from HSBC as they do not trust the banking giant’s branch in Hong Kong. Many more Hong Kong protesters have accused HSBC of complying with China’s actions against democracy activists.