Psychologist Illuminates One of Humanity’s Most Fundamental Concepts: Cause and Effect 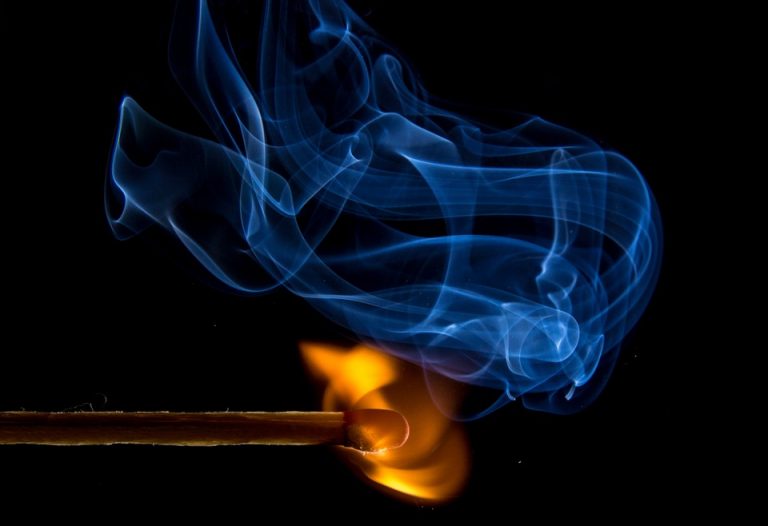 Did the match cause the brush fire, or the was it the years of dry leaves on the forest floor? (Image: roegger via Pixabay)

Like a parent being pestered with endless questions from a young child, most people will now and again find themselves following an infinite chain of cause and effect when considering what led to some particular event. And while many factors can contribute to an event, we often single out only a few as its causes. So how do we decide?

That’s the topic of a recent paper by Tadeg Quillien, a doctoral student in the Department of Psychological and Brain Sciences. The study, published in the journal Cognition, outlines how a factor’s role in an event influences whether or not we consider it to be a cause of that event. In his paper, Quillien constructs a mathematical model of causal judgment that reproduces people’s intuitions better than any previous model about cause and effect.

And in addition to providing theoretical insights, understanding how we reason about cause and effect has major implications for how we approach problems overall. Intuitively speaking, the event that has the strongest role in determining an outcome is generally considered its cause. In fact, philosophers and psychologists have observed humans ranking the causes of an event in different studies. For instance, if a match is found at the scene of a forest fire, people usually say the match caused the blaze, even though the oxygen in the air was also necessary for the fire to start. Quillien said:

“But what do we mean by ‘the strongest role’?, this is still a very hazy notion, and making it more precise has, for decades, been a source of headaches for philosophers and psychologists trying to understand causal judgment.”

“At least one of the functions of causal judgement is to highlight the factors that are most useful in predicting an outcome, as well as the factors that you can manipulate to affect the outcome.”

The process reminded him of a scientist seeking to understand how different phenomena are related. Scientists can run controlled experiments with many different cases to quantify correlations and determine an effect size, which is the association between one variable and another. But if we accept that this is what the mind is trying to do, a problem arises. Scientists rely on many observations before arriving at a judgment.

They can’t compute an effect size from a single occurrence. And yet, people generally have no trouble making one-off causal judgments. Quillien believes that this paradox can be resolved with the following hypothesis. When people make a judgment about cause and effect, they are unconsciously imagining the different ways that an event could have unfolded. He said:

“These counterfactuals give you the data that you need in order to compute this measure of effect size.”

Guided by these ideas, Quillien designed a simple mathematical model of how people make judgments about cause and effect. To test his model, he analyzed data from an experiment conducted by Harvard psychologist Adam Morris and his colleagues. The experiment used a lottery game to explore the effect of probability and logical structure on people’s intuitions about cause and effect.

“The probability of events affects our sense of causation in a strange way,” Quillien explained. Say a professor, Carl, wants funding for a project. His request is reviewed by his department chairs, Alice and Bill, both of whom have to approve it. Alice approves nearly every application, but Bill is notorious for rejecting most of them. The question is, if Carl receives his funding, who’s most responsible?

Most people would say Bill caused Carl’s request to be approved, since getting his endorsement has more bearing, in general, on receiving funding. However, change just one detail and people’s intuitions flip. If Carl only needs the approval of one or the other of his colleagues and still gets both, then people attribute Carl’s funding to Alice. In this case, her more reliable support was the strongest factor in whether Carl’s project was funded.

In their experiment, Morris and his colleagues were able to precisely quantify the effect that an event’s probability had on people’s causal judgment. Their conclusion was surprising, and no psychological theory at the time could explain their results, Quillien said. When he re-analyzed their data, Quillien found that his mathematical model closely matched how Morris’s participants had assigned cause and effect to the various events. In fact, it matched the data better than any other model to date.

The results highlight how probability and logical structure together inform our causal intuition. When both votes are necessary for Carl to get funding, it will happen only if the most stringent committee member is on board. As a result, people attribute a positive outcome to the less likely vote. By contrast, in situations where a single vote is enough, the approval of the more permissive faculty member is what most often determines the outcome.

“We are attuned to causes that tend to co-occur with the effects,” Quillien said. The way in which we reason about causality has practical implications. Consider the example of the forest fire again. Fires need three things to burn: oxygen, fuel, and an ignition source. But our minds don’t give these factors equal weight. Quillien said:

“While we may not have an exact model of how forest fires work, we still have this sense that oxygen is there all the time, and the forests are not always on fire. So the correlation between oxygen and fire is relatively low.”

The same reasoning applies to the fuel, namely the wood in the trees. But introduce a match to the equation, and the forest is much more likely to catch ablaze. The method of judging cause and effect that Quillien outlines in his work is good at guiding us toward the match: a factor with high predictive power that we might even be able to control. However, our intuition can sometimes lead us astray when we try to gain a more complete understanding of the world. Quillien said:

“If you want a deep understanding of how fire works, you need to factor in the role of oxygen. But if your intuitive sense of causation is screaming at you that oxygen does not matter, then that might lead you to ignore some of the important factors in the world.”

Cause and effect reasoning is a ubiquitous feature of cognition, and Quillien plans to further investigate how our sense of cause and effect influences other aspects of our psychology and worldview. He said:

“We explain almost everything in terms of cause and effect. As a consequence, many of the concepts that we use to make sense of the world have causation as a building block. If we can understand the concept of causation, then we can potentially understand the way a lot of other concepts work as well.”

Provided by: Harrison Tasoff, University of California — Santa Barbara [Note: Materials may be edited for content and length.]

What Lessons Are Conveyed by Little Red Riding Hood?

There are so many folktales and fables used by people to teach kids important life ...

7 Tips to Stay Healthy While Working From Home

Working from home can be a great way to stay productive while having a flexible ...

Have you noticed that some people who are young look old, while others who are ...

As vegetation is removed to make way for urban development, wild species experience a dramatic ...

Fashion Rentals Good for Business, but Not the Environment

In the past few years, the idea of fashion rentals has caught on. In the ...

Sugarcane Straw for Bioenergy Comes With Pros and Cons

The use of sugarcane leaves, known as trash or straw, to produce electricity and second-generation ...

The Chinese communist government focuses heavily on developing soft power, which is basically the ability ...

The EU and U.S. Take Down China’s Surveillance System

The United States is considering export controls to tighten sales to Chinese companies whose technology ...

The aye-aye, a member of the lemur family, is a primate native to the island ...