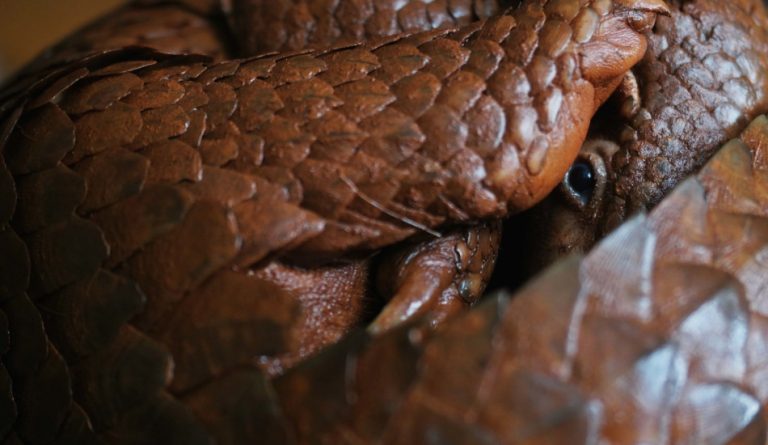 Chinese pangolins are on the verge of extinction due to poaching and trafficking. (Image: Global Wildlife Conservation via Flickr)

Chinese pangolins are nocturnal mammals mostly distributed in the southern part of the Chinese mainland and throughout most of Taiwan. They are also found in northern India, Nepal, Bhutan, and Bangladesh. Once common in China, their population has dropped sharply since the late 20th century due to poaching and trafficking. Now, they are on the verge of extinction.

Chinese pangolins are the only ones among the eight species of pangolins to have scales. Due to this, they are among the world’s most trafficked mammals. The scales are believed to carry medicinal properties like helping women who have difficulty lactating.

Despite there being no evidence that proves this, e-commerce platforms such as eBay and Taobao continue to advertise pangolin products, while major Chinese pharmaceutical companies offer similar items directly on their websites.

All four Asian species of pangolin are endangered or critically endangered. Pangolins have no defense mechanisms, not even teeth, and their unprotected underside is soft. The animals primarily feed on termites and ants.

The brutal way they are usually captured has drawn the attention of wildlife activists. In a recent video from northeast India, the hunters cut down a tree where pangolins were known to hide and lit a fire to smoke them out. Once out in the open, a pangolin is shown being repeatedly bludgeoned. The pangolin starts bleeding, after which, it is then thrown into a cauldron of boiling water.

The latest world wildlife crime report by the United Nations Office on Drugs and Crime says 99 percent of the legal trade in pangolin scales was recorded in China. It also finds that 71 percent of illegal pangolin scale seizures worldwide were destined for the Chinese mainland.

As a result, the Chinese pangolin is facing “functional extinction” on the mainland. Functional extinction means a species cannot play a significant role in the functioning of the ecosystem, or that their population is no longer viable. Due to limited knowledge, artificial breeding of the animal is not mature or complete and carries a high price tag, making the situation worse.

As a result of prolonged efforts by activists and international agencies, the Chinese government banned the consumption of pangolins. Later, in June 2020, they imposed a ban on the usage of pangolin scales in traditional medicines and increased the protection measures for native populations.

According to both The Independent and earth.org, government measures have not been effective. The UK-based Environmental Investigation Agency found that China’s 2020 pharmacopeia, a reference book for TCM practitioners, still lists pangolin scales as a key ingredient in various patented medicines. This means licensed hospitals and pharmaceutical companies can legally obtain pangolin scales to produce and sell these medicines.