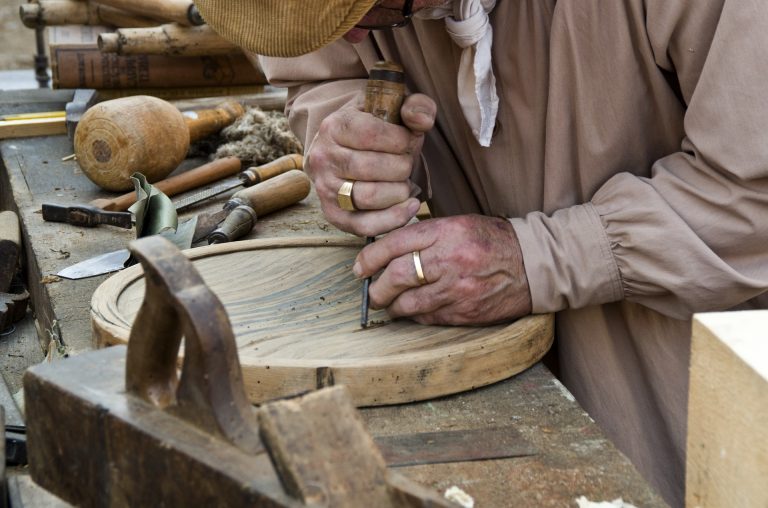 Tian Qi’s Tang Dynasty-inspired handbags came about when Qi, an avid art collector and architect, came across an exhibition poster of Japan’s Nara museum, he was intrigued. The poster showed the image of a Tang pipa instrument that had a round flower and light-colored square pattern decoration on it. The simplicity of the design and its overall elegance left quite an impression on Qi.

He later found that it actually was a pipa from the Tang Dynasty era that had been collected by Emperor Shomu from Japan. The pattern designs were not printed or painted. Instead, they were done using a wood inlay technique that has almost disappeared in China. This inspired Qi to team up with two of his friends and set up the breathtaking luxury brand DUANMU, which sells wooden handbags with designs inspired by the Tang Dynasty era.

After Qi became interested in the wood inlay tradition, he spent many months trying to master it. After six months of hard work, collaborating with craftsmen, and numerous trials, Qi succeeded in using fine wood inlay techniques to recreate the patterns on the Tang Dynasty pipa. One day while his wife was attending a party, she lamented that she did not have a nice evening bag. Qi got inspired and decided to use the newfound inlay pattern techniques to craft exquisite wooden handbags.

Creating such handbags is no easy task. Just a flower the size of a nail will need 15 small pieces of wood. A normal handbag covered with such flower patterns will need around 758 wooden components that have to be cut, polished, and inlaid with precision. One of DUANMU’s popular products is the Baoxiang Flower Clutch, which was made from a variety of precious wood materials sourced from around the world. The creation of this handbag involved a total of 194 procedures and 22 processes.

A series of handbags called Lingbo launched by DUANMU incorporated leather for the first time in addition to the usual fabric and wood. This idea initially faced opposition since many thought that using leather would negatively affect the uniqueness of the brand. However, Qi went ahead with the design as he believed that he should use whatever material is needed to create an excellent handbag.

“In ancient Chinese architecture, wood is the supporting structure, and walls are the enclosure. In our bags, the supporting structure is also wood, but the walls are replaced with leather. Introducing this soft material makes the bag more practical and comfortable. Meanwhile, it’s made differently from the stitched structure of Western leather products. Although they are all leather bags, they give you a completely different feeling,” Qi said to Magnifissance.

DUANMU has been active for over a decade and has attracted a strong clientele over the years. The company collaborates with numerous manufacturers to create their exquisite handbags. Initially, the manufacturers were resistant to the idea of improving their craftsmanship to meet product standards. But now, the manufacturers are happy since they get a sense of pride in creating such high-quality products.

The wood inlay design process originated in the Tang Dynasty era. It requires a great deal of patience and craftsmanship. The method involves sawing a variety of woods into thin slices, cutting out the target outline of the mosaic graphics, and then embedding these into the substrate. Once polished, the mosaic surface will feel smooth.

This mosaic technique is different from those used in the later Ming and Qing dynasties. Tang-era mosaic works are well documented in furniture, instruments, games, and so on. But since the process for creating such mosaic designs was difficult and there were severe material restrictions, the technique slowly declined over the centuries.