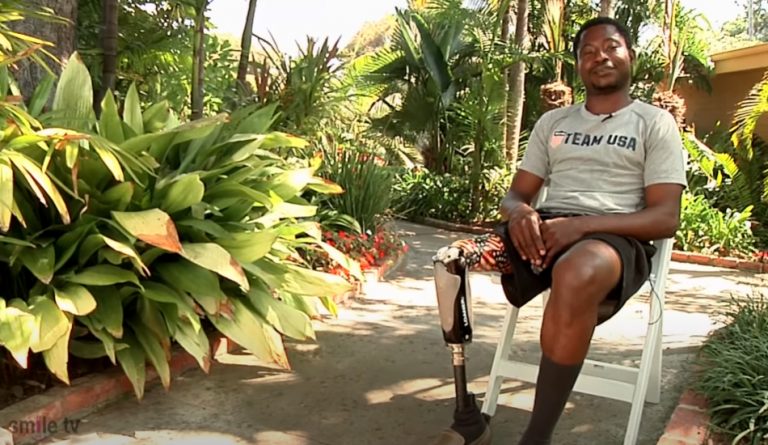 Emmanuel Yeboah rode a bike for 380 miles to prove that disability does not mean inability. (Image: Screenshot via YouTube)

Ghana is a Sub-Saharan country where disability is widely believed to be a curse. Ghana’s estimated 2 million disabled people do not have many options for a decent livelihood. So Emmanuel Yeboah decided to break this curse.

This situation urged Emmanuel Yeboah to take up a 380-mile bicycle ride to prove disability does not mean inability. Through cycling, Emmanuel Yeboah took up the huge task of raising the funds to establish the first school and sports academy for people with disabilities in Ghana.

Who is this outstanding Emmanuel Yeboah?

Emmanuel Yeboah was born in rural Ghana in 1977. He was born with a missing right tibia (shin bone). Ashamed of his son’s disability, his father abandoned the family soon after Emmanuel’s birth.

It was his amazing mother, Comfort Yeboah, who held a deep sense of human dignity and believed that Emmanuel Yeboah was capable of so much more. Their home lacked very basic amenities like electricity and plumbing, yet she encouraged him to go to school and achieve great things.

Schooling was tough, as he was the only “disabled” child among 240 students. In such a deeply superstitious society, Emmanuel Yeboah was mercilessly teased, sidelined, and shunned. At the age of 13, he dropped out of school to earn some money for assisting with his mother’s illness. The only option other than begging was shoe polishing on the streets.

It was his mother’s death on Christmas Eve in 1997, that changed Emmanuel’s life forever. Her last words were: “Don’t let anybody put you down because of your disability.” Emmanuel Yeboah decided that he would bike around Ghana to propagate the belief that the disability of the body can be overcome with a positive state of mind.

To raise awareness of the plight of the disabled through cycling, he first needed to find a bike. He came to know about the California-based Challenged Athlete Foundation (CAF) from a doctor.

CAF was founded by Bob Babbit to support disabled athletes. Emmanuel Yeboah wrote to the Foundation about his plans and requested their support. Impressed by his vision, Bob sent him a new mountain bike, biking gear, and $1,000 in cash. According to Emmanuel, the training was the hardest part of his mission.

Emmanuel Yeboah hails from the Okyenhene Kingdom of Eastern Ghana, where people believed that the disabled were unworthy to meet with the king.

He kept on trying to change this perception and so he applied constantly. His persistence paid off; he finally got permission to meet with King Osagyefuo.

Emmanuel told the king about his mission to spread awareness, and the help he got from the CAF. The king agreed to help him out. Thus, the second step in this incredible adventure was accomplished.

Emmanuel began his journey of 380 miles in 2001. He was 24 then. He wore a bright red shirt that read “The Pozo,” a Ghanaian slang word for a disabled person. For 10 days, he biked across Ghana spreading his vision and raising awareness. He inspired the entire country to pay attention to his mission, that nothing is impossible. “What you’ve done here is an example for these young men and women that the sky’s the limit,” said the king.

“What you’ve done here is an example for these young men and women that the sky’s the limit.”

The CAF officials invited Emmanuel to California to participate in the 2002 Triathlon Challenge. Emmanuel completed the 56-mile event in seven hours. The title sponsor of that year was Loma Linda Medical Center. They admired his efforts and fitted him with a US$15,000 high-tech artificial limb.

Emmanuel’s inspiring story was later turned into a documentary, Emmanuel’s Gift, narrated by Oprah Winfrey. Many newspapers and magazines featured him. He was awarded the CAF Most Inspirational Athlete of the Year Award, Nike’s Casey Martin Award, and ESPN’s Arthur Ashe Courage Award.

Emmanuel used the award money to help students with disabilities. He funded scholarships and bought wheelchairs for many of them. Later, he founded the Emmanuel Education Fund. He formed a non-profit organization called Emmanuel’s Dream.

Currently, Emmanuel’s wife and two daughters are living in Ghana, and his other daughter, Linda (named after the hospital where he got his prosthesis), lives with him in North Park, U.S. He is also a member of the U.S. National Amputee soccer team.

Emmanuel Yeboah’s dream is to build a school for disabled students in his homeland. He got the land as a gift from the government and is now raising money to construct the building. As we have already seen that there is no place for doubts in Emmanuel’s life, so we can expect the building to be constructed in the near future.