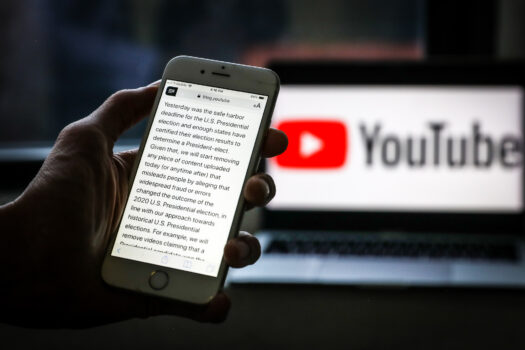 Video streaming platform YouTube, a subsidiary of Google, apparently has employees that have ties to the CCP. (Image: via The Epoch Times)

Google’s dealings with China have always raised suspicions due to the company’s ambivalent attitude to the Chinese Communist Party (CCP), behavior that appears aimed at gaining access to China’s huge market. YouTube, one of Google’s biggest subsidiaries, has employees with ties to the totalitarian Chinese regime.

Tai Jinjiang has been working as a software engineer at YouTube since May 2019. He previously worked as a project manager for a Chinese company called Guangzhou Shian Technology. At this firm, Tan worked on projects on behalf of the People’s Liberation Army (PLA) and several intelligence agencies affiliated with the Chinese regime. Tan notes that he played a crucial role in the successful PLA certification of ShiAn terminal by the Ministry of Public Security, State Secrecy Bureau, and IT Evaluation Center. He apparently won “numerous staff awards” due to his excellent performance.

Another software engineer at YouTube, Xiao Chen, joined the company in November 2020, prior to which he worked as a research assistant at hSun Yat-Sen University. Interestingly, the university’s Supercomputing Center was placed on the U.S. Entity List in 2015, thus deeming it to be a national security risk. A researcher from the university who visited the U.S. was arrested by the FBI on charges of lying about his relationship with China.

Xifei Huang has been working as a software engineer at YouTube since 2014. Before that, he worked as a developer at Peking University in Beijing. Not only is the university funded by the CCP, but a number of its researchers have also been arrested by the FBI due to not disclosing ties with the Chinese regime and stealing intellectual property.

Fan Yang joined YouTube as a software engineer in April 2017. He has worked as a research assistant at Fudan University during which time five hackers from the university were indicted for stealing secrets from six American companies. All five of them had ties to the Chinese military. Yang also interned at China Telecom, a company that has been accused of collaborating with the Chinese military for more than 20 years.

On Dec. 9, YouTube announced that it will be removing content that discusses the fraud that took place in the 2020 presidential election. For instance, the platform will remove any content that indicates that a presidential candidate may have won the election due to counting errors or software glitches. YouTube’s decision to curb free speech has raised broad controversy.

South Australian Senator Alex Antic said that Australians rely heavily on major U.S. firms like Facebook, Twitter, and YouTube to consume news, facts, and opinions. “There is now enormous power to control the public discourse in the hands of a small number of organizations. It is a huge concern for Australian democracy… The continued expansion of Big Tech and the way it operates risks restricting political viewpoints, will lead to a suppression of voices, increased polarization, and bias… Conservative voices cannot and should not be sidelined,” he told The Epoch Times. Around 76 percent of Australians are estimated to use YouTube.

Chang Po-yang, communications director of the Taiwan Statebuilding Party, noted that when YouTube first came out, it was seen as a beacon of free speech that allowed ordinary people to get their voices heard. But now, tech giants are controlling people’s access to information. Chang also points out the hypocrisy of YouTube removing videos related to U.S. election fraud while allowing Chinese propaganda videos to remain uncensored.