During the Opium Wars, a Story of Virtue and Wealth (Part 1) 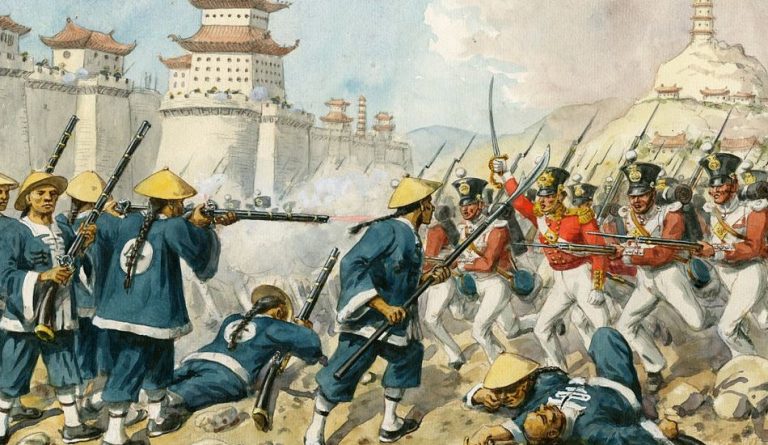 During the Opium Wars, Chinese leaders who governed civil and military affaris had many opportunities to accumulate great wealth for their families. (Image: wikimedia / CC0 1.0)

During the time of the Opium Wars in China, Zeng Guofan led the Hunan army with full authority from the Emperor and was responsible for all the financial management, but he never embezzled any of the army’s money.

At the time, the salt trade was a way of making money using coupons to exchange during buying and selling of the salt. It was a way for the government to control salt production and regulate sales.

The interest on a salt ticket could be 4,000 or 5,000 ounces of silver. According to the rules, the Zeng family was entitled to receive about 100 or 200 tickets or coupons. However, Zeng strictly prohibited his family from receiving them.

Another figure from Chinese history, Lin Zexu was well-known for banning the opium trade. He could have quickly gotten millions in bribes as long as he relaxed law enforcement slightly. His refusal to do so contributed to conflict with the British and he ended up being exiled in order to appease them. The choices made by these two men are quite a bit different than most people imagined.

During the Republic of China, Zeng Guofan’s grandson Nie Yuntai served as the Chairman of the Shanghai Chamber of Commerce. With his famous background, Nie had a good relationship with powerful descendants and wealthy businesspeople. After witnessing the rise and fall of some families, he found that it was easy for people to make a fortune, but it was challenging for them to keep their wealth.

In the late Qing Dynasty, some of the significant families governing civil and military affairs were very rich, far surpassing his maternal grandfather Zeng. However, by the time of the Republic of China, several of those prominent families had already declined. In just a few decades, the wealth, passing down to the third generation, was gone. On the other hand, even though his own family held power, they refused to make money for themselves and underwent significant changes as well. Nie published his insights on these matters in a book called The Law of Preserving Wealth.

Nie mentioned in the book that his maternal grandfather Zeng had been in power for 20 years, and so it would have been easy for him to make money for his family based on his position. As the supreme commander of the Hunan army, Zeng had absolute financial control. The imperial court disbursed the military expenses of the Hunan army, and those funds were at his disposal. According to statistics, since the Hunan army’s establishment in the third year of Emperor Xianfeng’s reign to the end of the Second Opium War, Zeng signed out military pay worth about 50 million ounces of silver. It would have been easy to accumulate millions in wealth for himself by skimming some off the top.

When Zeng commanded the Hunan army, the money he sent home was less than his previous salary as an official in Beijing, and sometimes he even sent nothing at all. Zeng once swore an oath to his staff: “I will never take money from the army to send home.” At that time, most of the generals and officials around him also had clean hands, and their good conduct benefited people in other ways.

Nie explained the reason in a letter from his family. Zeng expressed his loyalty by swearing an oath: “No love for money and no fear of death.” Besides what was needed for the everyday necessities of food and clothing, Zeng did not send that much money home. One reason behind this was that Zeng worried about the money leading his family to adopt an extravagant lifestyle.

He often donated his salary for military expenses. On the night of December 14, in the seventh year of Emperor Xianfeng’s reign, Zeng wrote in a letter to his brother Zeng Guoquan: “I have a salary of 21,000 ounces of silver in Zhejiang Salt Bureau. An official from the bureau arrived yesterday. I asked him to release the payment from my account to top up my military pay.”

At that time, any family owning one salt ticket could be called rich. However, Zeng specifically urged his family not to take them. Although it was well within the expectations of the Zeng family to legally receive 100 or 200 salt tickets, Zeng refused to make a fortune, nor did he hope for his descendants to accumulate wealth in this way. He was worried about the extravagance of future generations.

Zeng believed that if his son was talented, he could find his way even without an official career. If the son was the family’s black sheep, leaving him more money would only make him commit more sins and tarnish the family’s reputation further.