10 Lucky Chinese Characters With a Lot of Meaning 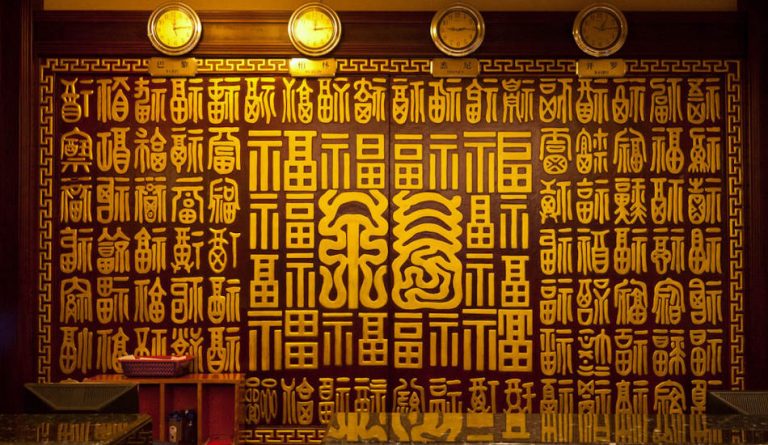 Auspicious Chinese characters are posted in homes and businesses in hopes of attracting good luck and prosperity. (Image: Kenneth Lu via Flickr)

Chinese characters usually have more than one meaning. Chinese people love certain characters in particular. A list of the top 10 most auspicious ones follows. Please note that the Chinese phonetic system for characters, pin yin, is also used here. For example, “fu” is pin yin for good luck in Chinese, but “fu” is only the phonetic part of the character and also represents other Chinese characters that sound the same.

Fu is one of the most popular Chinese characters used during Chinese New Year. It is often posted upside down on the front door of a dwelling. The upside-down character fu means “good luck came,” since the character representing “upside down” in Chinese sounds the same as “good luck has come.”

It used to refer to an official’s salary in ancient China. Feng shui is believed to be the Chinese way to health, wealth, and happiness. The three words often used together — fu, lu, and shou — are considered the triplet of blessing in feng shui and indicate good luck, wealth, and long life.

“Living with others in harmony” is an important part of Chinese culture. When you have harmonious relations with others, things will be a lot easier for you.

Chinese often say money can make a ghost turn a millstone. People used to greet each other during Chinese New Year by saying ”Kong xi fa cai,” which means to get more money and make a fortune.

The character of double happiness is usually posted everywhere for Chinese weddings.

Little needs to be said about this one. We merely want to point out that ai is often used in conjunction with ren: “ai ren” — meaning lover. Chinese often use this to refer to the wife.

Mei means beautiful. Mei li in Chinese describes a person who is pretty and nice looking. It is good to say: “That lady is mei li.”

The character also implies living in a time of few wars with less danger.

De means virtue, morals, values, heart or mind, kindness, integrity, and ethics and is one of the most important of the Chinese characters.