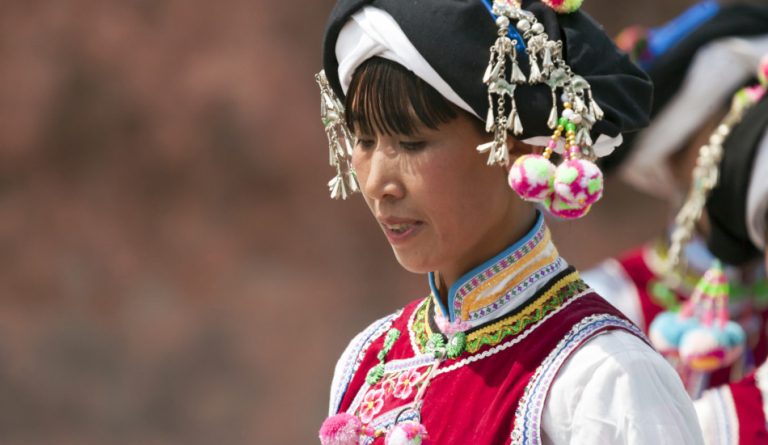 Women of the Yi nationality prevent fighting between tribes in their own unique way. (Image: via Dreamstime.com © Erinpackardphotography)

Reading this story will offer you a better understanding of women of the Yi nationality and how they prevent fighting between tribes in their own unique way.

The Yi ethnic group, with a population of 7 million, is mainly distributed over the provinces of Sichuan, Yunnan, Guizhou, and the Guangxi Zhuang Autonomous Region in China. There are over a million Yi in the Liangshan Yi Autonomous Prefecture, which holds the single largest Yi community in China.

Here is an interesting story of Yi women‘s power.

In a field in the Liangshan mountains, two groups of young men from the Chinese Yi ethnic group, armed with spears, sticks, and bows, are on the verge of a violent fight.

Suddenly, a middle-aged woman, dressed in a skirt edged with lace, comes between them. The sharp spears almost touch her body, but she remains calm and shakes her skirt, as if she is signaling the men. The sudden scene astonishes the fighters. They stop advancing forward and slowly lower their arms, watching the movements of the skirt. After moments of silence, the leaders of both sides give the order to withdraw.

Who is this woman? Is she a powerful village authority? NO!

She is only an ordinary villager. One group of these young men is from her husband‘s village and the other from her own village. According to Yi ethnic customs in that area, if an armed fight ever happens between two villages, no man from either village dares to go to the border due to the risk of being kidnapped or killed. Women, however, are an exception.

As usual, they can work in the fields along the border or visit relatives and friends in the other village without being endangered. If a war should happen, any woman from the specific villages can mediate by standing between the fighting parties. Her action is usually respected. If either of the two sides ignores her advice, she will remove her skirt and stand nude before them, until she finally commits suicide for the sake of her honor. If such an event does happen, the side that persists with the war will be condemned and more people will join the war.

As large-scale wars are discouraged, the fighters often favor the brave woman’s counsel.