All Acoustic Equipment of the Chinese 10,000-Meter Manned Submersible Fendouzhe 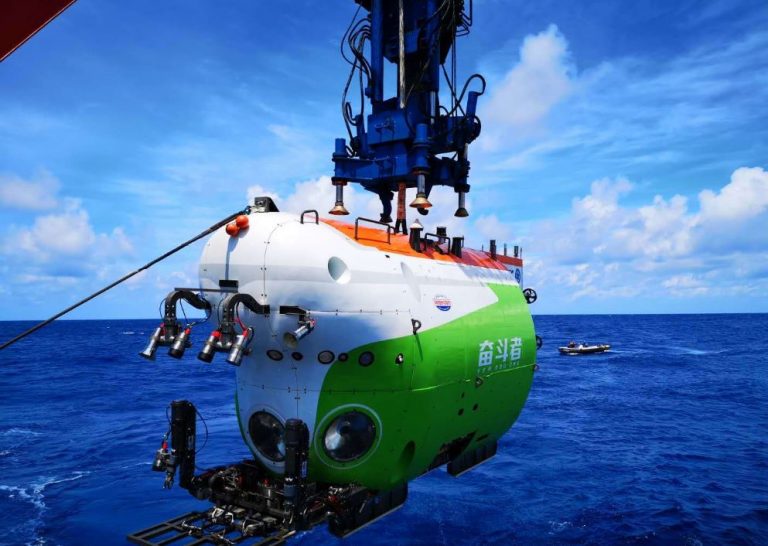 The first full-depth Chinese deep-sea manned submersible Fendouzhe successfully completed all sea trial tasks and returned to Sanya port on Nov. 28. It successfully landed on the deepest point of the world, Mariana Trench, at 8:12 a.m. on Nov. 10, reaching the depth of 10,909 meters and setting a new record for Chinese manned deep-diving.

Three Fendouzhe divers shared their feelings at the first moment through the underwater acoustic communication system with the audience around the world, saying:

The manned submersible Fendouzhe is a major deep-sea scientific and technological submersible specially supported by the National Key Research and Development Program of China since 2016. The Institute of Acoustics, Chinese Academy of Sciences (IACAS) is responsible for its acoustic technology and equipment.

The IACAS has accomplished the independent research and development of Fendouzhe’s acoustic system, including the deep-water acoustic communication modem, the topography detection sonar, the multibeam forward looking sonar, the Doppler velocity log and the obstacle avoidance sonar, as well as the system integration of the positioning sonar and the inertial navigation equipment.

Compared with the two previous manned submersibles, Jiaolong and Shenhai Yongshi, the acoustic system of Fendouzhe has reached higher technical indicators and broken through the full-depth difficulty with full-domestic production. It has performed well in the whole sea trial process of Fendouzhe, providing reliable technical support for the continuous cruise operation under the full-depth deep-sea.

In the acoustic system, underwater acoustic communication is the only bridge between Fendouzhe and its mother ship, Exploration-I, and it has realized the real-time transmission of text, voice, and image from the 10,000-meter seabed to the mother ship. The integrated navigation system, which consists of the Doppler velocity log, the positioning sonar, and the inertial navigation equipment, provides high-precision underwater positioning and navigation for the cruising operation of Fendouzhe.

In the diving operation on Nov. 16, with the help of the integrated navigation system and sonar equipment, the divers of Fendouzhe successfully retrieved three underwater samplers, earlier placed on the 10,000-meter seabed, in only half an hour, making the saying “search for a needle in the sea” into reality. Moreover, the sampling image was transmitted back to the mother ship through the underwater acoustic communication modem.

Five researchers from the Ocean Acoustic Technology Center of IACAS have participated in the sea trial of Fendouzhe recently. Two of them are divers in many deep-diving tasks and guaranteed the reliable operations of the submersible and its acoustic system.