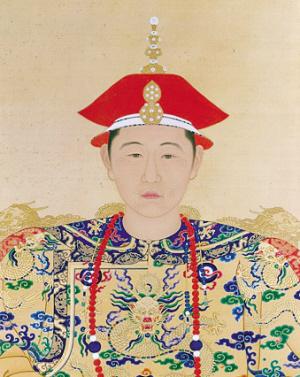 Kangxi became emperor under peculiar circumstances. One year while China was still under his father’s rule, Emperor Shunzhi, a plague of smallpox ravaged the imperial palace and the emperor’s beloved concubine died. It caused him immense pain and he decided to become a monk. Amid the ensuing chaos, the grandmother, the Grand Empress Dowager, decided to install the recovering 7-year-old Kangxi on the throne. China became a prosperous, strong, and stable nation under his reign. He is regarded as one of China’s greatest emperors.

Kangxi contracted a very strange and distressing disease. The imperial doctors used all kinds of expensive, rare medicines and potions at their disposal, but it was all to no avail. He was so angry and frustrated that he stopped taking the medication.

One night, he dressed up as a commoner and went out of the palace for a walk alone. He came to a street and saw a small herb shop. It was late at night, but the herbal shop was still lit and sounds of chanting were the in air.

Kangxi thought: “None of the imperial doctors’ abilities are very competent, the able ones are among the common folks. Why don’t I take a look?”

The Great Emperor Kangxi humbly knocks on the door

When he entered the shop, he saw a man reading by candlelight, and guessed that the man must be the herb doctor.

The doctor asked: “What can I do for such a late night visitor?” Kangxi replied: “Sorry to bother you so late, but I have a strange disease, which makes me itch all over. My body is covered in red spots. I have consulted many doctors, but to no avail. Can you check things out for me?”

The doctor replied: “Please take off your top to let me have a look.” He did as he was asked. The doctor took one look and said: “You don’t have to worry. It is nothing. It is just that you have been eating too many delicacies and a chronic consumption of ginseng is like ‘oil to the fire.’ This causes the red spots and the itchiness”.

The Great Kangxi asked: “Can it be cured?”. The doctor replied with certainty: “Yes, the right medicine will do it.” He took a jar from a wooden shelf. The doctor then placed a piece of cloth on the table and emptied the contents of the jar onto the cloth. It was a heavy bundle weighing eight catties, (1 catty equals approximately 18 oz, 500 grams)

Kangxi was surprised: “Doctor, how much should I use for one dose?” The Doctor laughed: “This is not for taking. This is how you use it. After you get home, put these eight catties of herbs into 100 catties of water and bring it all to the boil. Pour all of it into a bathtub, then bathe in the water. Make sure the temperature is right. You will be cured after taking 3 to 5 baths.”

The Great Emperor then thought to himself: “None of the imperial doctors can cure me with their various prescriptions, but your worthless looking herb can?” The doctor saw his doubts and smiled: “Don’t worry, I’m not after your money. You can take it all home and give it a try. I won’t charge you if it does not work.” Kanxi replied: “All right, I will reward you greatly if I’m really cured.”

He did as he was instructed after returning to the palace. Just as expected, once he was in the tub, he immediately felt relieved and refreshed beyond words. After three baths, he no longer itched and when he checked, the red spots had disappeared.

He was thrilled and returned to the herb shop in plain clothes again on the fourth day. When the doctor saw the smiling Kangxi, he knew that he had recovered. He said knowingly: “Are you here to pay me for the medicine?” Kangxi replied: “Yes sir, how much is it?”

The doctor broke into laughter: “Please forgive me. Your doubtful look the other night prompted me to deliberately say that I would not charge you if you were not cured. Well, now that you are cured I’m still not going to charge you anything. I am impressed by your demeanor and graces. May I ask if we can be friends? Can you tell me your name please?”

Kangxi smiled: “My name is Huang Tianxing. I am a scholar.” The doctor was happy after hearing his reply and said: “I am Zhao Guei Tang. I am also a penniless scholar. My father wished for my name to be on the royal list of successful candidates of the civil service examination. He hoped I could honor our ancestors, but I failed with my few attempts. Now I can only run this small herb shop. Here in the capital, I am looking after my parents and studying at the same time, wishing I could make the list one day.”

Kangxi said: “My friend, as people say: ‘There is a way for everyone.’ With your expertise, I can recommend you to be an imperial doctor. Isn’t that as good as being on the royal list?”

Zhao smiled and said: “You are wrong, a doctor should think on behalf of the common people and serve their needs. Although I may enjoy fame and fortune as an imperial doctor, it is my wish to serve the people. If I can’t do that, what good am I?”

Kangxi was moved and replied: “I really admire you virtue and goals. But please excuse me for saying that, my dear friend, since you have failed to become a select scholar, why don’t you settle on the medical path where you can excel?”

Zhao said: “That is what I thought too, but this path is not easy, either. Although I have the will, I don’t have the money to support myself. If you can get wealthy one day, maybe you can help me build a big medicinal hall, and see it as repayment for your cure.”