Jade Can Protect the Body and Ward Off ‘Evil Spirits’ 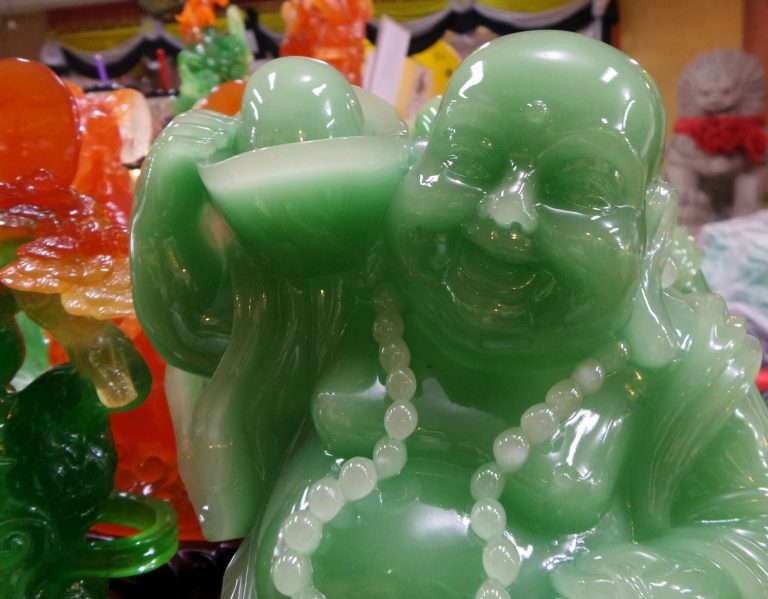 This jade Buddha statue is the symbol of happiness and wealth. (Image: Kanokrut Tesakarn via Dreamstime)

Jade is a precious stone that comes in various shades of green, white, and yellow, with green being the most common color. It is capable of bearing very high temperatures, while at the same time giving off heat to the surrounding environment, making it great for use in a sauna, since it can even maintain its heat in the water.

Jade hearkens back thousands of years ago, and it was used in ancient China to craft the finest objects and figures found in antiquity. It had a special significance, similar to that of diamonds and gold in the West, and was adored as a symbol of spirituality, purity, health, and status.

The Chinese character for jade depicts three pieces of jade linked by a silk thread, symbolizing its connection to heaven, earth, and humankind. The ancients believed that jade could communicate with gods, and that the will of gods was conveyed through it. Those who conformed to the will of heaven could gain the blessings of gods through jade.

The Chinese text Classic of Mountains and Seas, also known as Shan Hai Jing, said: “Gentlemen wear jade to guard against bad omen.” It was considered an auspicious stone and was used to fashion many kinds of ornaments to wear on the body, bringing the wearer blessings from the gods, the ability to avoid evil, and to have good luck. Jade, therefore, had the effect of preventing disasters. In ancient documents, as well as modern times, numerous stories exist about it bringing peace to its wearers and protecting them from injuries and disasters.

During the years of the Republic of China (1912-1949), there was a story about Mr. Li, who wore an ancestral jade on his waist. It was a beautiful piece, and it had a texture that was pure, flawless, and crystal clear, with a vivid carving on the front depicting two fish.

One day, as Mr. Li was strolling along the street, he met a man from Japan. The man noticed Mr. Li’s jade and liked it very much. In fact, he was so taken by it that he offered to buy Mr. Li’s ancestral heirloom for 5,000 taels of silver. Mr. Li was not short of money, so he refused to sell it to the man. But the offer made Mr. Li take more of an interest in his beautiful inheritance.

One day, while Mr. Li was eating in a restaurant, a fight suddenly broke out. As a crowd formed, and people began to push and pull at each other, Mr. Li was pushed to the edge of a window. He fell three stories down, landing on the hard stone pavement.

Jade is a living, life-saving mineral

But strangely enough, when Mr. Li landed, he felt like he was falling on something soft, and he was not injured at all. As Mr. Li stood up to adjust his clothing and check his body, he was relieved to see that the jade on his waist had not broken. However, to his surprise, the appearance of one of the fish had changed, with one of the fish looking like it was dead, while the other fish looked like it was still alive.

Not long after, Mr. Li bumped into the Japanese man again. After telling him of his unusual incident, the man told Mr. Li that jade was a living mineral and it had saved his life. Because one-half of it had saved Mr. Li’s life, and only one-half of it remained (the other fish), it was now worth 2,500 taels, and the man once again offered to buy it. He once again declined the offer, but after listening to the Japanese man’s words, Mr. Li treasured the jade even more.

It’s said that jade’s ability to save its wearers from disaster and protect them from evil occurs in another dimension — a dimension that cannot be seen with human eyes. The Chinese believe that the energy of yin and yang exists between heaven and earth, meaning that there will be righteousness wherever there is evil.

There is no reason for jade to leave the body

The ancients said: “There is no reason for jade to leave the body,” meaning that the precious stone should always be worn for the protection that it brings. If the wearer can align himself with the same good virtues of jade, be of pure heart and mind, and do good deeds, his righteous behavior will naturally help him avoid troubles and disasters, for when a person is filled with good virtues, there is nowhere for evil to enter or lurk.