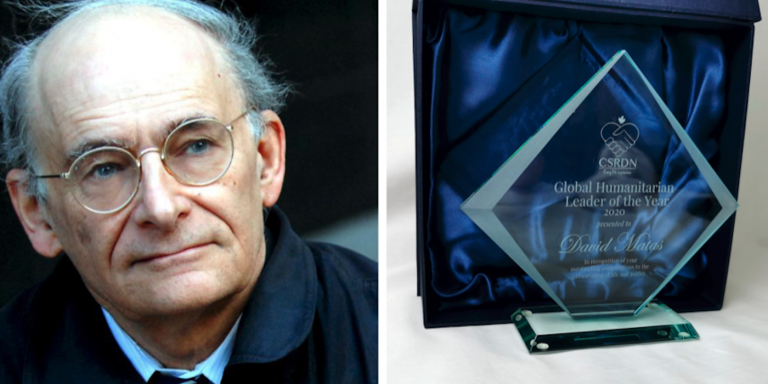 Human rights lawyer David Matas has been awarded the first-ever Global Humanitarian Leader of the Year award by the human rights group Canadians in Support of Refugees in Dire Need. (Image: via David Matas)

One of the world’s leading investigators into state-sanctioned forced organ harvesting in China has been honored with a human rights award in Canada.

The award thanked Matas for decades of dedication to the cause of human rights and especially for his work documenting the horrors of forced organ harvesting in China, said a January 6 statement.

“We want to recognize David’s tremendous contributions to saving lives and justice by speaking out against the horrific crimes of forced organ harvesting in China,” Dr. Aliya Khan, the CSRDN co-chair said. “Killing people for their organs is a most cruel and barbaric practice and must be stopped,” Dr. Khan said.

The award statement said Matas has dedicated his life to defending the rights of society’s most vulnerable. A lawyer and recognized authority on human rights, immigration, and refugee law, he serves as senior legal counsel for B’nai Brith Canada and has been involved in numerous national and international human rights groups. He was named to the Order of Canada in 2008 for his contributions to human rights legislation and immigration and refugee law.

Matas is also a co-founder of the International Coalition to End Transplant Abuse in China (ETAC), which is a coalition of lawyers, academics, ethicists, medical professionals, researchers, and human rights advocates dedicated to ending forced organ harvesting in China.

Another ETAC co-founder is former Canadian MP David Kilgour, who conducted investigations with Matas in 2006 into allegations that Falun Gong practitioners in China were being killed for their organs.

“After months of investigation, including undercover interviews with doctors throughout 12 provinces in China, we come to the regrettable conclusion that these allegations are true,” Kilgour said back then.

In their research they also examined transplant programs of hundreds of hospitals in China, drawing on media reports, official propaganda, medical journals, hospital websites, and a vast number of deleted websites found in archives.

In this report, they estimated that 60,000 to 100,000 transplants are performed each year in China and stated the main target for organ harvesting is Chinese who practice Falun Gong. To a lesser extent, Uyghurs, Tibetans, and select House Christians have also been killed in order to obtain organs for transplants, the report said.

More recently it’s feared that Uyghurs and other Turkic Muslims have increasingly become targeted for organ harvesting with more than a million of them being held in camps in China’s far-west Xinjiang region since 2017.

Last month, it was announced that three American lawmakers were introducing a bill aimed at stopping state-sanctioned forced organ harvesting from prisoners of conscience in China.

Watch this recent episode of China Uncensored on forced organ harvesting in China, which features Matas.