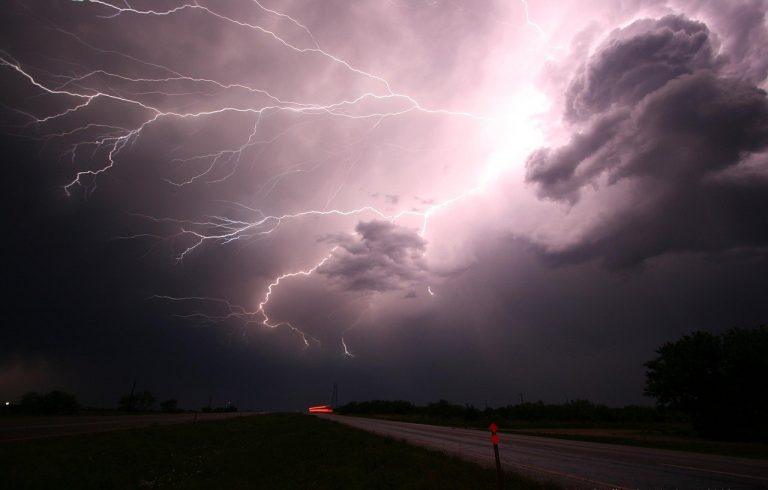 Researchers at Brazil’s National Space Research Institute (INPE), in partnership with colleagues in the United States, United Kingdom and South Africa, have recorded for the first time the formation and branching of luminous structures by lightning strikes. (Image: via pixabay / CC0 1.0)

Researchers at Brazil’s National Space Research Institute (INPE), in partnership with colleagues in the United States, United Kingdom, and South Africa, have recorded for the first time the formation and branching of luminous structures by lightning strikes.

Analyzing images captured by a super slow motion camera, they discovered why lightning strikes bifurcate and sometimes then form luminous structures interpreted by the human eye as flickers. The study was supported by FAPESP. An article outlining its results is published in Scientific Reports. Marcelo Magalhães Fares Saba, the principal investigator for the project, told Agência FAPESP:

“We managed to obtain the first optical observation of these phenomena and find a possible explanation for branching and flickering.”

Upward lightning strikes start from the top of a tall building or other ground-based structure and propagate upward to the overlying cloud. The upward flashes they recorded were triggered by positively charged cloud-to-ground lightning discharges, which are much more common, as described by the same INPE research group in a previous study. Saba said:

“Upward lightning originates at the top of a tower or the lightning conductor on a skyscraper, for example, when the storm’s electrical field is disturbed by a cloud-to-ground discharge as far away as 60 kilometers.”

Although the study conditions were very similar in Brazil and the U.S., luminous structures were observed in only three upward flashes, recorded in the U.S. These were formed by a positive leader discharge propagating toward the cloud base. Saba said:

“The advantage of recording images of upward lightning is that they let us see the entire trajectory of these positive leaders from ground to cloud base. Once inside the cloud, they can no longer be seen.”

The researchers found that a low-luminosity discharge with a structure resembling a paintbrush sometimes forms at the tip of the positive leader. Saba said:

“We observed that this discharge, often referred to as a corona brush, may change direction, split in two, and define the path of the lightning flash and how it branches.”

When an upward flash branches successfully, it may proceed to the left or right. When branching fails, the corona brush may give rise to very short segments as bright as the leader itself. These segments first appear milliseconds after the corona brush splits, and pulsate as the leader propagates upward toward the cloud base, the videos show. Saba said:

“The flickers are recurring failed attempts to start a branch.”

Saba added that the flickers may explain why multiple lightning discharges are frequent, but more studies are needed to verify this theory.

Provided by: Elton Alisson, FAPESP [Note: Materials may be edited for content and length.]