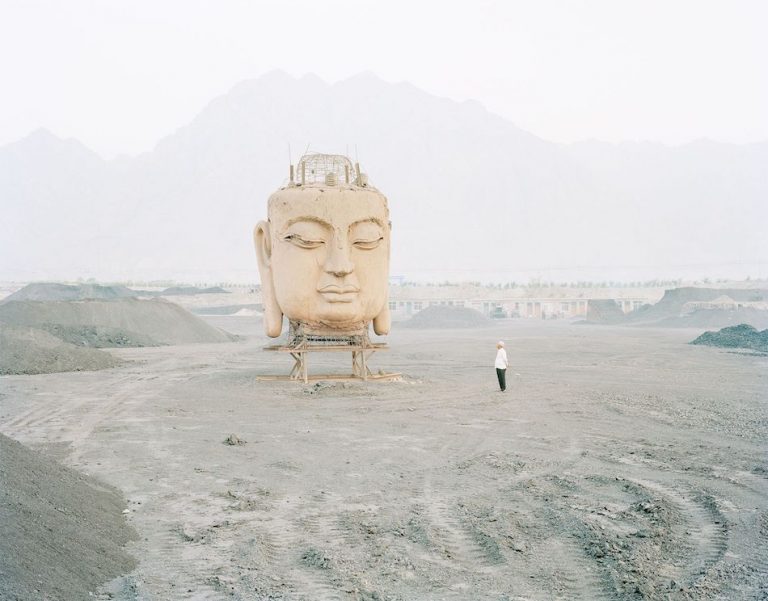 A Buddha head in a coal yard in Ningxia. (Image: Zhang Kechun)

In 2010, Chinese photographer Zhang Kechun set off on his fold-up bicycle to spend two years photographing China’s legendary Yellow River. During his river odyssey, Zhang would travel for a month at a time, lugging around a large-format Linhof camera. Not wanting to rush the project, he sometimes would not take a single picture for an entire week.

In an interview with Time Magazine, Zhang said:

“I wanted to photograph the river respectfully, it represents the root of the nation.”

After the Yangzte River, the Yellow River is China’s second largest river and is approximately 3,400 miles long. It runs through nine provinces and empties into the Bohai Sea, just south of Beijing. The Yellow River has been the inspiration for many poets and artists.

The legendary river is known as the “Cradle of Chinese Civilization,” much in the same way as the River Nile is to the Egyptian people. During times of destructive flooding, it is nicknamed “China’s Sorrow.”

Zhang Kechun is a professional artist based in Chengdu, China. He was born in 1980 in Sichuan Province, where he began painting as a child. After he studied art and design, he worked in Chengdu as a designer before developing an interest in photography.

For this series, Zhang preferred to photograph on overcast days, overexposing the images and giving them a soft, pastel look. While it wasn’t his intention to document the effects of pollution, he decided to include it, along with images of industrial development, which caused the project to take on a new meaning.

While much of the river has been adversely affected by pollution and industrial development, Zhang was able to still pay homage to it by conveying its gentleness and sense of beauty through his camera lens.

Zhang explained to Time Magazine that he intentionally juxtaposed the river against people who appeared rather small in comparison to instil a feeling of hope for the future of the river, stating:

“The power of humans is nothing compared to the power of nature, even when we try to change it.”

Zhang has another beautiful photo series entitled Between the Mountains and the Water, where he follows groups of local tourists as they visit various mountains and rivers in China. This series also shows the rapid effects of modernization on the environment. Chinese culture contains a deeply ingrained belief that “mountains are virtuous, rivers are moral.”

Zhang noted that Chinese culture contains a deeply ingrained belief that “mountains are virtuous, rivers are moral.” He wanted to capture that belief, as well as the natural beauty of China’s mountains and rivers despite them being altered by human intervention.