The Righteous Way Is the Most Valuable 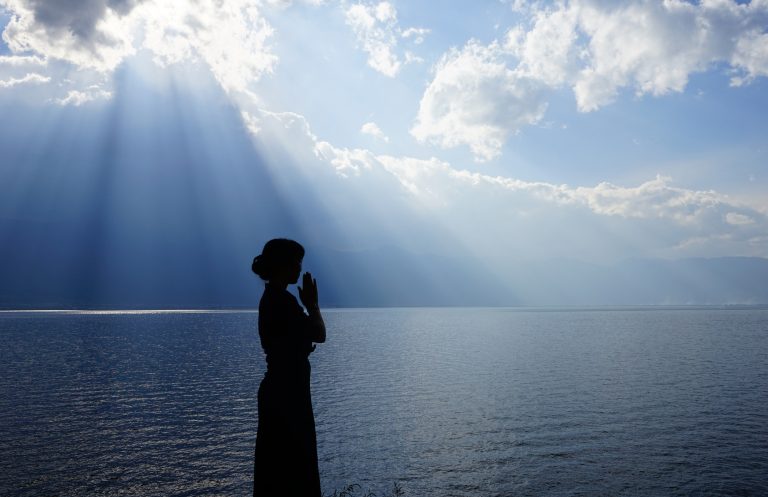 The righteous way in dealing with all conditions and circumstances of life is the most valuable as eventually the outcome is always rewarding and fruitful, with peace of mind. (Image: Qiming Ya via Dreamstime)

The journey has many turns and twists. The righteous way in dealing with all conditions and circumstances of life is the most valuable, as eventually, the outcome is always rewarding and fruitful.

Toward the end of the Qing Dynasty (1636-1912), a plague spread in a village in southern China. A road through the village divided it into two halves. All the sick patients were in the rear half. A villager, Lee Sha,n in the front half just had a baby son. For the safety of his family, he intended to move a thousand miles away to his father-in-law’s place. Before his departure, he went to the rear half to bid farewell to his good friend Chen Hongdao.

Entering through the door, he saw Chen and his wife laying on the bed looking sickly. Seeing him coming, Chen opened his mouth with much effort and said: “Do not come near us. We are both sick, and we might die soon.” He pointed his fingers to the cradle in the corner: “If you really want to help me, raise my son until he grows up.” Then he fainted. Lee held back his emotions and took the baby with him.

“For the safety of his family, he intended to move a thousand miles away.”

That same day Lee and his wife hastily packed up to leave with the two babies. However, they encountered robbers on the road and all of their money was taken. His wife also fell down a slope. When he carried her on his back to return to the road, she had already fainted.

With his wife unconscious and two hungry babies, he did not know what to do. Suddenly, a bell rang not far away, and he saw a doctor coming toward him. He hurried to ask for help. The doctor rolled up his wife’s pants and examined her legs, finding that she had broken some bones. He told Lee: “It is serious; you need to carry her on your back and go to my clinic now.”

The righteous way: ‘Saving life is the most important thing now, anything else is not that important’

Lee sighed: “I must be honest, my money has all been stolen by bandits.” Dr. Zao, a famous local doctor, said: “Saving life is the most important thing now, anything else is not that important.” So they went to Dr. Zao’s clinic and the family stayed there. Dr. Zao supported their daily needs, including providing medicine. After two months, Lee told Doctor Zao that his wife could walk, and they planned to continue their journey. “How can I show my gratitude for your help?” he asked.

Doctor Zao waved his hand, telling him not to concern himself with the matter and to leave without any worries. Lee insisted that Dr. Zao must ask for what he wanted. Dr. Zao knew that Lee meant what he said, remained silent for a while, and finally said that his wife was infertile. Since Lee was too poor to raise two babies, and his wife’s leg had not completely recovered yet, it would be too risky for them to continue their journey with two babies. If Lee could give him one baby, he would pay Lee 100 units of silver as payment.

On hearing this, Lee’s wife was delighted, with her eyes shining. She pulled Lee to one side and said: “What are you waiting for? Dr. Zao is right in everything he said. With his financial conditions, the baby can grow up in a much better family than ours.” Lee asked: “Which baby should we give him?” His wife said: “Chen’s baby, of course, and we can get 100 units of silver; why are you hesitating?”

Lee shook his head: “Chen asked me to raise his son before his death. It would be unrighteous if I sell his son.” His wife asked: “Do you mean that you want to sell our son?” Lee frowned and thought for a while. He decided to let fate make the decision. He told Dr. Zao: “Choose the one that you like.”

Dr. Zao thought for a while and took Chen’s baby. Lee sighed: “It is Heaven’s will.” He took the 100 units of silver and hired a carriage to get to his father-in-law’s place. Half a year passed. One day when he went out, he saw a person coming toward him. When he studied the face carefully he recognized Chen.

According to Chen, right after Lee’s family left, the government sent a doctor to cure their disease. All the villagers were saved. Lee asked for a description of the doctor, and knew that it was Dr. Zao, the one who met him on the road.

Chen said that he came to take back his son. Lee told him to wait for a while. Then he went to his wife who was in the neighborhood and took the baby from her. He told her that Chen was waiting to pick up his son.

Lee’s wife was startled: “Do you want to give our son to him? Why do you not tell him what happened? It was Dr. Zao who decided he wanted Chen’s son; it has nothing to do with us.” Lee sighed: “Nobody would believe it. People would say that I sold my friend’s son for 100 units of silver. But if Chen is righteous, he would return the baby even if I give it to him.”

His wife was puzzled. Lee said: “Although Chen’s son was also just born when he gave it to me, and he might not be able to distinguish whether the baby I give him is his son or not, his wife is very careful. She can distinguish it and know that it is not their son. Chen would certainly bring the baby back to me. I would tell him what happened on the road. He would not believe me until then.”

It was exactly as Lee expected. After Chen brought back the baby, his wife found out that it was not their son and asked Chen to bring the baby to Lee. Lee told him what happened and knelt down, asking for Chen’s forgiveness. Chen helped him up and sighed: “Since you gave me your own son, I believe you. But…”

Lee took 100 units of silver and gave it to Chen: “Go to Dr. Zao’s clinic and return the money to him, he is a righteous man, and he will certainly give your son back to you.”

Lee also took out a piece of paper. “This is Dr. Zao’s prescription for my wife. When he sees the prescription and the 100 units of silver, he will understand that what you say is true. Since the plague is gone, we will move back. We will see you soon in the village.” Chen nodded his head, took the money, and left.

Several months later, Lee and his family moved back to their home village. Chen invited Lee to eat that evening. Lee, not seeing any child in the house, was worried: “What happened?  Was it that Dr. Zao did not want to return the child?”

Chen shook his head. “It was not that he did not want to return the child. I did not ask him at all. One day, I went to Dr. Zao’s clinic. I saw him holding the child in his arms, kissing him and laughing. He risked his life to save our lives, including mine and that of my wife. I could not open my mouth to raise my request.”

Lee thought about it for a while: “If you did not have the heart to say it, do you want me to say it myself?” Chen waved his hand: “Forget about it. I am contented with the fact that my son will live a better life than mine. In addition, Dr. Zao is a great father and a good doctor who has saved many people’s lives and treated their diseases. We all owe him a lot. I do not want to send a chill to his heart.”

“When I do good I feel good. When I do bad I feel bad. That is my religion.” Abraham Lincoln