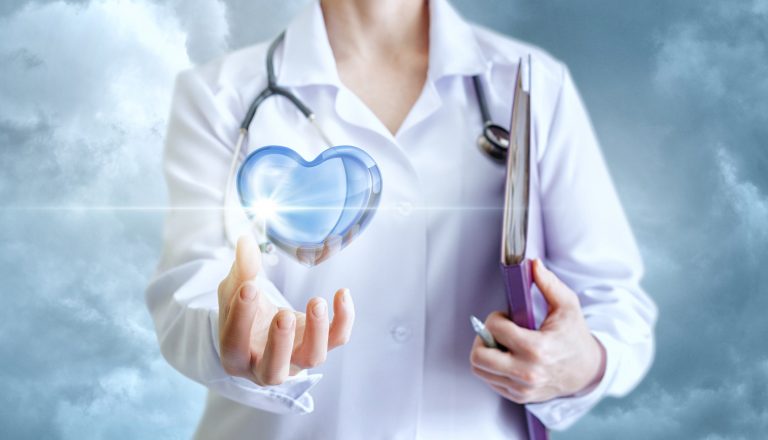 It was observed that women with elevated self-compassion scales had thinner walls around their carotid arteries and had less plaque formation inside.(Image: Nataliia Mysik via Dreamstime)

Heart disease and myocardial infarction are more likely to occur in winter. There is an acupuncture point in your palm that can help you take care of your heart. According to traditional Chinese medicine (TCM), when you press the Laogong acupoint in the center of the palm, this will help protect the heart and relieve the fire/heat and inflammation.

Myocardial infarction usually occurs in men 45 years of age and women over 55 years of age, but the age of the onset is getting younger and younger.

“The elasticity of blood vessels in women is much better than that of men,” said Sha Zhengping, director of the Dahan Chinese Medicine Clinic. “Also, men generally have poor living habits, have many social activities, and often smoke, so the age of onset of myocardial infarction is lower than women. In middle age, at the peak of life, myocardial infarction is likely to occur.”

It is recommended that you massage the Laogong point frequently in your free time to keep your heart healthy and avoid myocardial infarction.

Gently fold the middle finger and ring finger of your hand toward the center of your palm. The Laogong point is the place where your fingertips touch. Press it slightly harder, and it will feel uncomfortable and tingle.

The Laogong point is a unique acupuncture point for treating heart disease, for it can relieve heart fire and clear blood heat. It is located in the pericardial meridian, the role of which is to protect the heart. Sha said that the Laogong point is suitable for modern people to practice self-care.

Down from the Laogong point, there are two crucial acupoints of Neiguan and Jianshi, which are located in the pericardial meridian and can also be massaged. The Neiguan acupoint is situated between the two tendons of the wrist, and three horizontal finger-widths of the wrist stripes in the arm’s upper direction, which specializes in chest and abdominal diseases. The Jianshi point is located in the upper four horizontal finger-widths of the wrist stripes.

Among the “five flavors,” bitterness enters the heart. Bitter gourd and lotus seeds are very bitter flavors, which can relieve the heart’s fire and stress. For those who often stay up late, work overtime, and have a dry mouth, you may wish to add a handful of lotus seeds to your tea.

Take equal amounts of the restorative ingredients and make the tea.

Traditional Chinese medicine says: “Danshen also has the effect of Siwu (Rehmannia, white peony, angelica, and chuanxiong),” which has the excellent function of promoting blood circulation, removing blood stasis, and nourishing the blood.

“Sha said that most Chinese medicine treats heart disease with a little bit of Danshen. Most people with heart disease have too much fat in their blood, which makes the blood too thick; hawthorn can lower blood fat. Cassia seeds have the effect of smoothing the intestines, improving defecation, and reducing stress.”

Most people can drink this tea. If you have gastrointestinal problems such as stomach ulcers, you can use less hawthorn.

With all medical and dietary concerns, it is recommended to consult your trusted medical practitioner.