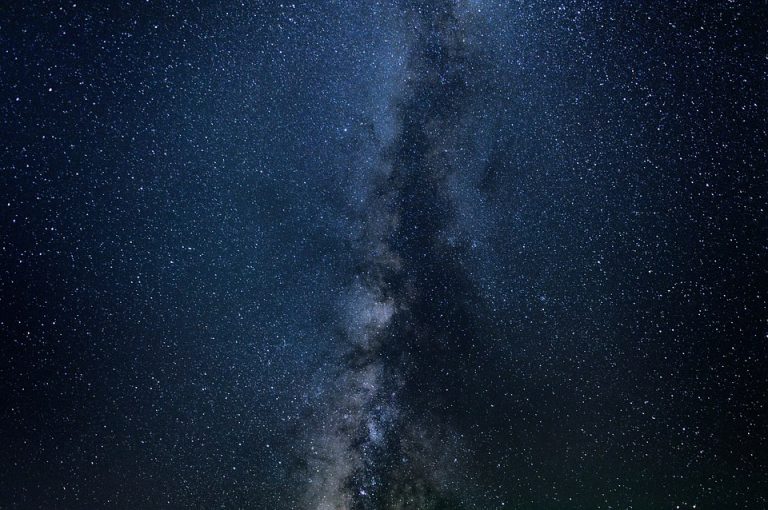 New measurements of that weak background glow show that the unseen galaxies are less plentiful than some theoretical studies suggested, numbering only in the hundreds of billions rather than the previously reported 2 trillion galaxies. (Image: Pexels via Pixabay)

How dark is space? If you get away from city lights and look up, the sky between the stars appears very dark indeed. Above the Earth’s atmosphere, outer space dims even further, fading to an inky pitch-black. And yet even there, space isn’t absolutely black. The universe has a suffused feeble glimmer from innumerable distant stars and galaxies, as measured by the New Horizons spacecraft.

New measurements of that weak background glow show that the unseen galaxies are less plentiful than some theoretical studies suggested, numbering only in the hundreds of billions rather than the previously reported 2 trillion galaxies. Marc Postman of the Space Telescope Science Institute in Baltimore, Maryland, a lead author on the study, said:

“It’s an important number to know – how many galaxies are there? We simply don’t see the light from two trillion galaxies.”

The earlier estimate was extrapolated from very deep-sky observations by NASA’s Hubble Space Telescope. It relied on mathematical models to estimate how many galaxies were too small and faint for Hubble to see. That team concluded that 90 percent of the galaxies in the universe were beyond Hubble’s ability to detect in visible light. The new findings, which relied on measurements from NASA’s distant mission of the New Horizons spacecraft, suggest a much more modest number, consistent with older Hubble data. Tod Lauer of NSF’s NOIRLab, a lead author on the study, said:

“Take all the galaxies Hubble can see, double that number, and that’s what we see — but nothing more.”

These results were presented on Wednesday, Jan. 13, at the 237th meeting of the American Astronomical Society, which is open to registered participants. The cosmic optical background that the team sought to measure is the visible-light equivalent of the more well-known cosmic microwave background — the weak afterglow of the big bang itself, before stars ever existed. Postman explained:

As powerful as Hubble is, the team couldn’t use it to make these observations. Although located in space, Hubble orbits Earth and still suffers from light pollution. The inner solar system is filled with tiny dust particles from disintegrated asteroids and comets. Sunlight reflects off those particles, creating a glow called the zodiacal light that can be observed even by skywatchers on the ground.

To escape the zodiacal light, the team had to use an observatory that has escaped the inner solar system. Fortunately, the New Horizons spacecraft, which has delivered the closest-ever images of Pluto and the Kuiper Belt object Arrokoth, is far enough to make these measurements. At its distance (more than 4 billion miles away when these observations were taken), the New Horizons spacecraft experiences an ambient sky 10 times darker than the darkest sky accessible to Hubble. Lauer said:

“These kinds of measurements are exceedingly difficult. A lot of people have tried to do this for a long time. New Horizons provided us with a vantage point to measure the cosmic optical background better than anyone has been able to do it.”

The team analyzed existing images from the New Horizons spacecraft archives. To tease out the feeble background glow, they had to correct for a number of other factors. For example, they subtracted the light from the galaxies expected to exist that are too faint to be identifiable. The most challenging correction was removing light from Milky Way stars that was reflected off interstellar dust and into the camera.

The remaining signal, though extremely faint, was still measurable. Postman compared it to living in a remote area far from city lights, lying in your bedroom at night with the curtains open. If a neighbor a mile down the road opened their refrigerator looking for a midnight snack, and the light from their refrigerator reflected off the bedroom walls, it would be as bright as the background the New Horizons spacecraft detected.

So what could be the source of this leftover glow? It’s possible that an abundance of dwarf galaxies in the relatively nearby universe lies just beyond the detectability of the New Horizons spacecraft. Or the diffuse halos of stars that surround galaxies might be brighter than expected. There might be a population of rogue, intergalactic stars spread throughout the cosmos. Perhaps most intriguing, there may be many more faint, distant galaxies than theories suggest. This would mean that the smooth distribution of galaxy sizes measured to date rises steeply just beyond the faintest systems we can see — just as there are many more pebbles on a beach than rocks.

NASA’s upcoming James Webb Space Telescope may be able to help solve the mystery. If faint, individual galaxies are the cause, then Webb’s ultra-deep field observations should be able to detect them.

This study is accepted for publication in the Astrophysical Journal.