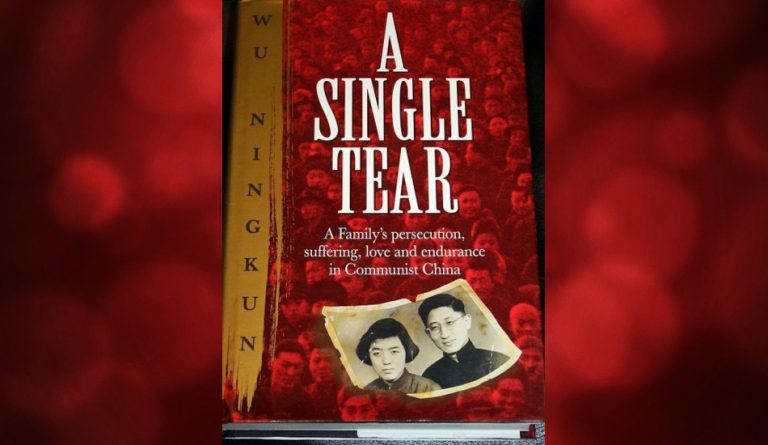 On August 10, 2019, beloved Chinese-born Professor Wu Ningkun, Emeritus Professor of English Literature, author of the book 'A Single Tear,' passed away at his home in the United States. (Image: via Amazon)

At the beginning of 1951, Wu Ningkun, who was studying in the United States at the time, received a letter of appointment from Lu Zhiwei, the President of Yanjing University, asking him to be a professor of English. At that time, he naively thought: “Giving up a most affluent capitalist career and returning to serve the new socialist China, I will be warmly welcomed as a patriotic intellectual.”

Like so many other decent people, Professor Wu Ningkun innocently fell into the debauched trap of dictator Mao’s “Let a hundred flowers blossom,” which was intended to “seek out,” destroy, and kill every last critic of the regime. They were deemed and considered to be dangerous “rightists” and anti-communists. Within a year of his return to China, Wu Ningkun was labeled and condemned as being against the Communist Party and his home country.

The Great Northern Wilderness, a wasteland in the northernmost region of China, had been left uncultivated since ancient times. The Communist Party of China organized soldiers and reformers to carry out reclamation. Among those sent, there were the ones that were lured into expressing their honest opinions and criticisms of the CCP.

In 1958, Wu Ningkun was sentenced as a reform laborer and was brought to the coldest north-eastern gulag farm on a truck with many others for “reform.” When they arrived at the farm, the gulag manager warned them not to try to escape. He said: “The farm is surrounded by swamps. This is called a grass mat: It looks flat, but if you step on it, you will drown.”

“Wu Ningkun looked up at the sky, and then looked around. The Great Northern Wilderness was cold and desolate; people could feel their smallness and desperation.”

At the time, China was in the period of the so-called “Great Leap Forward” and planned to “catch up with the United States and surpass Britain” within 15 years. The supervisor on the prison farm said: “You are guilty, work hard to show results, only then can you wash off your bad ideas against socialism.”

In the past, no matter who came forward to expose his criticisms and accusations, Wu Ningkun did not think he was guilty, but after such a long period of “rehabilitation” in a reform prison, he actually felt that what they said was right.

As a professor, he had never done hard labor before. Thinking that he had to redeem himself, he redoubled his efforts and did more work and did it faster than others. As a result, he was praised as a model worker. But only Wu Ningkun knew inside that he was on the verge of collapse every day. In addition to the ravages of heavy physical labor, the most unbearable thing for him was starvation.

After being transferred to another prison farm, the food was even worse and the inmates were so hungry that their bodies got swollen. One of the few hopes of not being starved to death was for the family to send some food.

On one occasion, when Wu Ningkun received some food from his wife, a roommate who studied Chinese classics handed over a note with beautiful calligraphy that read: “Professor, I beg you to give me one piece of your food, and when my wife sends food from Hunan, I will return it twice as much. Saving one life is better than building a seven-level pagoda.”

Looking at the beautiful calligraphy, Wu Ningkun became softhearted and gave his roommate a pancake. Sadly, not long after, his roommate still died of hunger, and his wife, far away in Hunan, did not manage to get any food to him.

“Only after you have personally experienced the years of suffering, can you know how valuable it is to survive and how important it is to not let it happen again.”

After 30 long years of bearing the label “rightist,” in 1979, Wu was told that all past wrongdoing was rectified and he had been rehabilitated. He felt that he had a responsibility and an obligation to document the suffering he endured over those 30 years; he thus wrote his memoirs.

In Wu Ningkun’s A Single Tear, we see accounts of the degradation of human nature in society at that time. Wu tells of an old professor who used to be gentle and kind. When he came back from the hard labor gulag, he was a totally different person. He became the most vicious in exposing others for any speech that was not in line with the Party.

The seniors, who once spoke in a civilized manner and had a dignified demeanor, changed overnight and came forward to denounce others, shouting and screaming as if they were shrews cursing in the street.

“The students who were once full of admiration for knowledge forced their teachers to kneel at the drop of a hat. I don’t know how many people have been killed because they said the wrong thing, or because someone deliberately misinterpreted their words.”

During that period of “the blossoming of a hundred flowers and the contention of a hundred schools of thought,” Wu Ningkun once spoke out and sincerely said:

However, after expressing these words, instead of getting the “freedom” he wanted, Wu Ningkun was taken to prison for speaking out. But he did not regret saying such words. In 1993, he published A Single Tear in the U.S., recording the history he wanted to be memorialized and saying what he wanted to say, a publication for which he had his pension suspended, his house ransacked and repossessed, and all his possessions confiscated.

The CCP: a wimpy, pathetic, crime syndicate, ‘A Single Tear’ hurt their ‘feelings’

His university top brass said that his memoirs “hurt the feelings of some old comrades.” That sissy excuse from cold-blooded killers is an indictment of the wimpy, pathetic, crime syndicate called the CCP! It exposed their fatal feet of clay. They hate exposure. Anything decent is their downfall. To prove their point, they took out their revenge on Wu and his wife. They became homeless, and they had no choice but to live in the homes of their children in the United States. Wu complained year after year to get justice for himself, but could not until 1999 when Premier Zhu Rongji visited the U.S.

Wu Ningkun knew that such a small hardship was nothing compared to those who did not survive. One single tear may seem very small in the scale of things now, but it will one day move the Chinese nation and merge into an ocean, and alert all of us to be vigilant and not to repeat the mistakes of the past.

“Never be afraid and never give up. Even if you stand up all alone, you can win.”

Wu Ningfun, a milestone in the conscience of humanity, may you gain the reward of the righteous ones and eternal freedom in Heaven.

Part 1 can be read here.