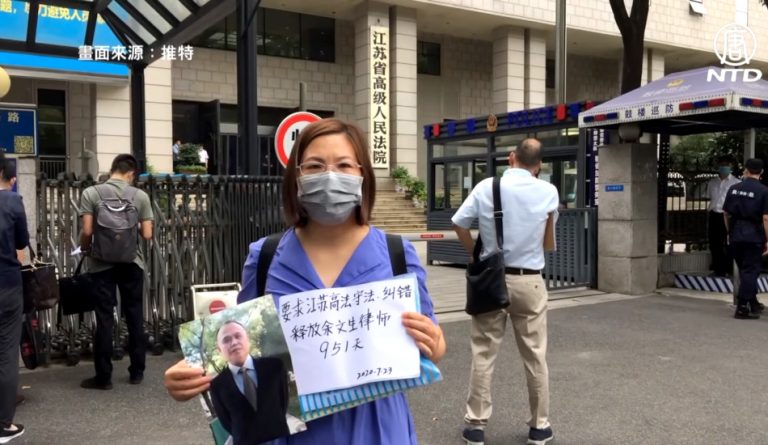 Xu Yan, the wife of jailed Chinese rights lawyer Yu Wensheng, has been advocating for his release ever since he was jailed for 'inciting subversion of state power.' (Image: Screenshot / YouTube)

Xu Yan, the wife of jailed Chinese rights lawyer Yu Wensheng, was finally allowed a 20-minute video call with him from a detention center in Xuzhou City, an eastern province of Jiangsu, China. Yu had been incommunicado for almost three years, serving his sentence for “incitement to subvert state power” by the ruling Chinese Communist Party (CCP). Xu Yan called for the CCP to treat her husband more humanely and requested that he be allowed to serve his sentence closer to home.

In an interview with RFA’s Mandarin Service, Xu Yan described how her call with Yu Wengsheng went. When asked how she received the news of being allowed to make the video call after having been denied visits for three years, she said she was quite surprised since Yu Wensheng had been stripped of all his legal rights for the past three years. While visiting should be a usual part of the legal process, getting a video call was a surprise.

The moment she saw him onscreen, she heard the police officer say that they only had 20 minutes to talk. Xu Yan did not wish to waste precious time by weeping and was worried there would not be a second time to contact him, so instead, she focused on updating him about what was happening outside as well as finding out how his health was and about the conditions he was living in.

The RFA then asked how his current physical condition was since Yu Wensheng’s right hand shakes and he has pain from dental problems. Xu Yan observed that he was sitting on an interrogation chair, donning the uniform of the detention center, and wearing a mask. The officers shaved his hair off, and he was handcuffed. Going from being focused on his professional image to wearing a dull uniform with his head shaved, it was the polar opposite of his previous persona as a lawyer.

Xu Yan said that he was innocent and did not deserve to be handcuffed. The treatment he has received is unacceptable, but there is nothing much she can do about it.

Upon further inquiry, she learned that Yu Wensheng could no longer write because his right hand shakes uncontrollably. Xu Yan called for the Chinese government to provide him with immediate treatment for his right hand. He also had to have three of his teeth extracted due to immense pain. Xu Yan assured him that she would appeal to the higher authorities to get him fitted with crowns and fight for his rights. Unsure if her husband will receive proper treatment or not, Xu Yan is determined to advocate for his rights in accordance with the law.

The RFA asked if Xu Yan told Yu Wensheng that the higher authorities also attacked his attorney Lu Siwei. Xu Yan said that she let him know Lu Siwei had to attend a hearing where his lawyer’s license was revoked, to which Yu Wensheng expressed worry about Lu’s future.

Regarding life inside the detention center, Yu reported that one of the problems he had to face was that he was not served congee in the mornings. He was only allowed to have cold water initially, but later the authorities served him warm water only on cold mornings. According to Xu Yan, it was not something most people would be able to adjust to — having nothing but cold water for breakfast on a cold day. Making congee is not a difficult task; rather, it is a basic humanitarian need.

Finally, RFA asked which prison Yu Wensheng would be transferred to since his appeal has been rejected. Xu Yan stated that Yu has been in the detention center for almost three years and is now due to transfer to a different prison to serve his sentence. There is no confirmation as to which prison he will be assigned to. Xu Yan and Yu’s defense lawyer are appealing to the Chinese authorities to assign him to a prison in Beijing, closer to where he lives. Yu Wensheng had not the slightest clue as to where he would be transferred. Yet, on the video call, he let Xu Yan know that he had also asked to be transferred to a prison in Beijing.

Transferring to Beijing should be the norm since it is where his household registration is, and he would also be able to benefit from family visits. The higher authorities have taken him to Xuzhou, about 950 miles away from his place of residence. It also implies that Xu Yan would have to cover that distance just for a 20-minute visit. It is a form of persecution for his family, according to Xu Yan.