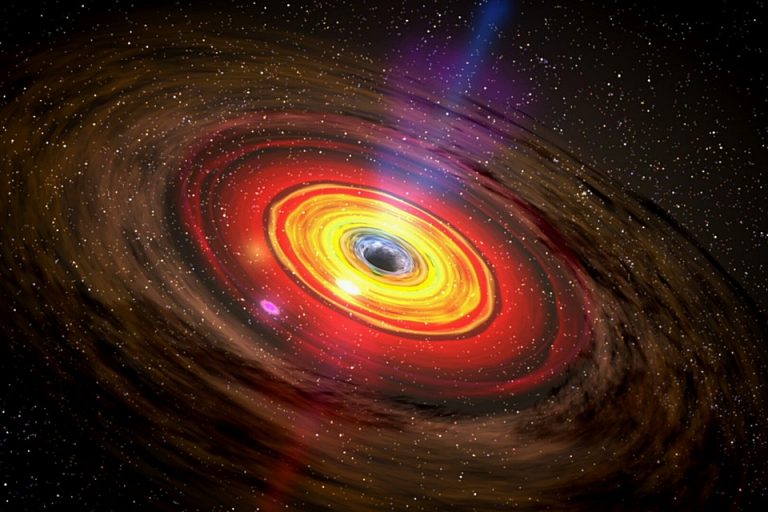 A recent study suggests the possible existence of ‘stupendously large black holes,’ or SLABS, even larger than the supermassive black holes already observed in the centers of galaxies. (Image: via pixabay / CC0 1.0)

A recent study suggests the possible existence of “stupendously large black holes” or SLABS, even larger than the supermassive black holes already observed in the centers of galaxies. The research, led by Queen Mary Emeritus Professor Bernard Carr in the School of Physics and Astronomy, together with F. Kühnel (Münich) and L. Visinelli (Frascati), investigated how these SLABs could form and potential limits to their size.

While there is evidence of the existence of supermassive black holes (SMBHs) in galactic nuclei — with masses from a million to 10 billion times that of the Sun — previous studies have suggested an upper limit to their size due to our current view on how such black holes form and grow. The existence of SLABS even larger than this could provide researchers with a powerful tool for cosmological tests and improve our understanding of the early Universe.

It has widely been thought that SMBHs form within a host galaxy and grow to their large sizes by swallowing stars and gas from their surroundings or merging with other black holes. In this case, there is an upper limit, somewhat above 10 billion solar masses, on their mass. In this study, the researchers propose another possibility for how SMBHs could form, which might evade this limit. They suggest that such SLABs could be ‘primordial,” forming in the early Universe, and well before galaxies.

As “primordial” black holes don’t form from a collapsing star, they could have a wide range of masses, including very small and stupendously large ones. Professor Bernard Carr said:

“We already know that black holes exist over a vast range of masses, with a SMBH of four million solar masses residing at the center of our own galaxy. Whilst there isn’t currently evidence for the existence of SLABs, it’s conceivable that they could exist and they might also reside outside galaxies in intergalactic space, with interesting observational consequences.

“However, surprisingly, the idea of SLABs has largely been neglected until now. We’ve proposed options for how these SLABs might form, and hope that our work will begin to motivate discussions amongst the community.”

Dark matter is thought to make up around 80 percent of the ordinary mass of the Universe. While we can’t see it, researchers think dark matter exists because of its gravitational effects on visible matter, such as stars and galaxies. However, we still don’t know what dark matter is.

Primordial black holes are one of the potential candidates. The idea of their existence can be traced back to the 1970s when Professor Carr and Professor Stephen Hawking suggested that in the first moments of the Universe fluctuations in its density could have resulted in some regions collapsing into black holes. Professor Carr said:

“SLABs themselves could not provide the dark matter, but if they exist at all, it would have important implications for the early Universe and would make it plausible that lighter primordial black holes might do so.”

Provided by: Queen Mary, University of London [Note: Materials may be edited for content and length.]